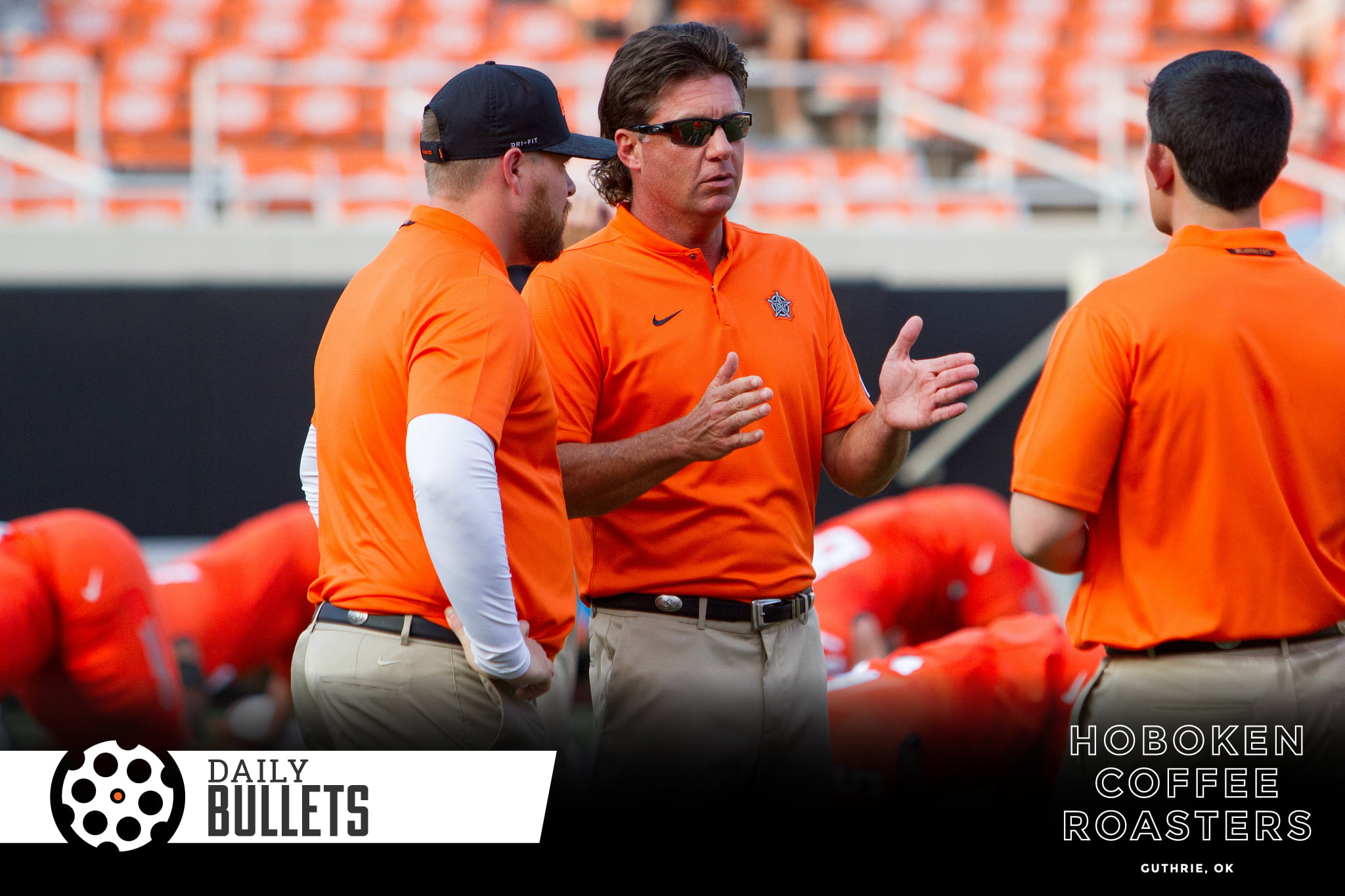 Happy Good Friday – I’ve been jamming this tune for the last week or two prepping for the holiday, I’d recommend for anybody looking to celebrate.

• Trevor Boone is lighting it up for the Pokes from the plate – and he’s a big reason OSU smoked Texas in a series opener yesterday.

In the past week, Trevor Boone has hit seven home runs.

Boone smashed three homers Thursday, bringing his team-leading total to 13 on the season. He also became the first player in school history to have three three-home run games. [PFB]

Mama there goes that man again! @TrevorBoone_33 makes history as the only #okstate player to ever have three 3-HR games as he blasts his third ? of the night. ? #BooneBomb #GapBand #GoPokes pic.twitter.com/tJfpQfBh80

• Mike Gundy, Sean Gleeson, and Co. see one trait that’s required for a quarterback to be successful at Oklahoma State. Spoiler: it’s not a rocket arm.

“I don’t know if everybody saw it but Coach Gundy was on the NFL Network and was talking about what we want in a quarterback here and I saw it,” Gleeson started. “The first thing you want is an intellectual guy that can operate an offense that has been really, really successful. That has been a big emphasis for me especially being a new guy, that we get their brains working well this spring. [GoPokes]

I think I buy that. Confidence comes from being successful – a definite need. But unless intellectual is a synonym for football IQ, I’m not sure that a well-read, studious academic is what’s required.

There has to be a bar set on physical capabilities before those qualities come into play.

• Chris Harris, Jr.’s signing was sort of a product of “groupthink” – all of his friends were going, why not him?

“I have a relationship with all of them,” Harris said of the other signees. “I was going to play with the Boones [in my last year of AAU], I played with Marcus [Watson] in a camp and I played with Avery [Anderson III] my freshman and sophomore years.”

Harris and Anderson played together on RM5 Elite in the Nike EYBL. In fact, that was one of the more stacked teams I’ve seen with Kentucky’s Tyrese Maxey, Harris, Anderson and OU’s De’Vion Harmon. [GoPokes]

We see it all the time in football – all of the blue chips sign with the same teams because they do these Under Armor/Army All-American games and Nike’s The Opening events together and recruit each other there.

Basketball may just be a different creature from a recruiting perspective but OSU (outside of the McDonald’s game) is on the right side of that fence.

• Couldn’t agree more with this sentiment downplaying the Murderer’s Row of the SEC East.

Let’s not get carried away with the difficulty of the SEC schedule. Playing an East division schedule with a crossover against a team not named Alabama or LSU isn’t overly taxing.

• Finished this fiction read earlier this week about an abandoned girl growing up in the North Carolina marshes – really enjoyed it.

• Fantastic faith-based article by a pastor on a memorable Easter