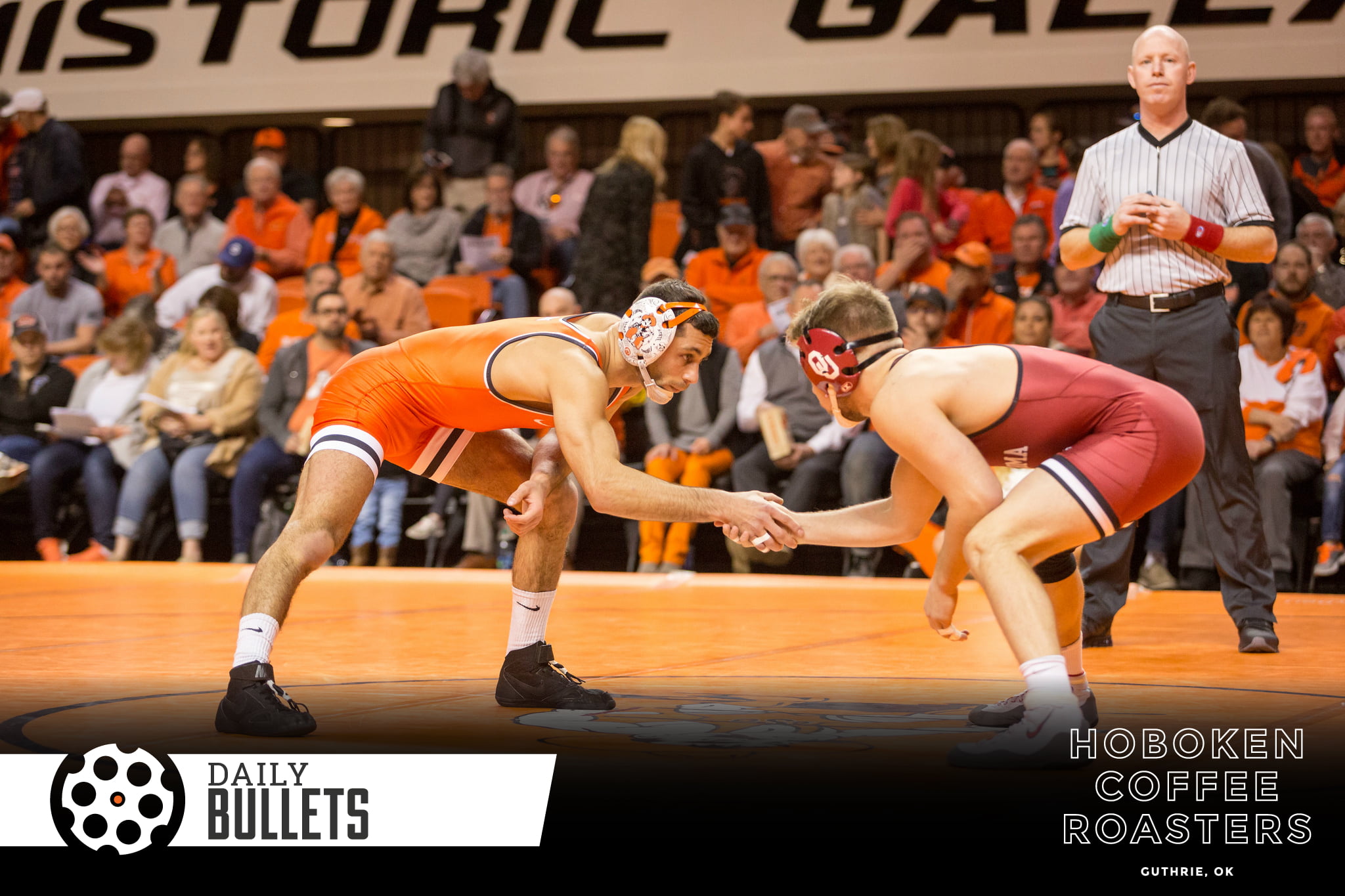 Good morning. I survived three days with three kids by myself and even got at least one of them fired up to watch some OSU hoops on Saturday. No bow and arrow celebratory dances yet after a successful bath time, but they’re coming. Let’s Bullets.

• OU can light the world on fire in that increasingly liberal sport Mike Gundy coaches all they want, but it takes a real squad to do what OSU does to OU on the mat every time out.

“Some of these guys have never lost one, and they’re gonna go through their four years and never lose one. That hasn’t been done. I don’t think that’s ever been done. Those are things that one day when you’re little older, you can throw it in someone’s face.”

The dual ended with a scuffle after White pinned Jake Boyd. White slapped the mat after the official called for the fall, which seemed to tick off Boyd. Boyd got up and shoved White, who went on to celebrate. It was White’s first heavyweight pin. The shove resulted in OU losing a team point for unsportsmanlike conduct. [PFB]

• Why is Tennessee so intent on hiring all of Oklahoma State’s football coaches. We got some legit fake news on Sunday evening that Robert A. quickly shut down.

Tonight following the Oklahoma State Senior Football Banquet, I approached Yurcich and asked him what he could tell me as there has been talk all weekend going back to Friday of Yurcich being a strong candidate with Tennessee head coach Jeremy Pruitt.

One source from Tennessee told me that Pruitt had interviewed Yurcich, Houston offensive coordinator Kendall Briles, and UCF quarterback coach Jeff Lebby. No confirmation on that but when I asked Yurcich at first, he said, “There’s nothing going on. Hey, I would tell you if something is up. You have been good to me.” [Go Pokes]

• This by Scott Wright on that Mizzou game in 2008 is really good. He talks to all the important pieces. I know Gundy gets a few eye rolls when he says that was his biggest win, but I get what he’s saying. I’ll never forget where I was when OSU won that game, and there are only a handful I can say that about.

“We had worked so hard as a group,” said Sexton, who returned to the program as a graduate assistant the past two seasons. “The 2005 recruiting class and 2006 had merged as the nucleus and foundation for what the Cowboy culture is now.

“That win validated everything we had done. To finally get that big-time win, on a big stage like that, it told you, this is why you put in the work in the offseason. It pays off. And it gave us that national exposure that we were something different.” [NewsOK]

• Amazing headline here from the Goose on Ice, and the post is terrific, too.

The Cougars continued to make adjustments in the second half and sent some different defenders at Ice, and the Cowboys eventually went away from this as Houston’s lead began to increase. That being said, I think this is something the Cowboys can continue to utilize through the rest of the season as there won’t be many opposing guards who can compete with Ice’s size and strength.  [PFB]

I’ve probably said this multiple times by now, but Ice can be a piece on a great Big 12 team. By the way, here’s a good 5T from Marshall Scott on Saturday’s game. And finally, hate on Kelvin all you want, but this was real (and really good).

• Kyler is … Barry? The other Barry — actually named Berry — does the Kyler-Barry comp, replete with an Old Testament reference and the whole thing … kind of works?

This is one of sports’ charms. It’s never-ending ability to surprise. The never-know-what’s-coming script. The Cowboys say farewell to Thomas and get a Heisman Trophy out of the deal. The Sooners bid adieu to Mayfield and replace him with an Elisha, a quarterback with a double portion of the indomitable ability to which the Sooners had grown accustomed. [NewsOK]

I’m actually in love with this comp — because I love smart, contrarian #takes — and it double as the most Berry Tramel article of all time. Moar!

I agreed with Kyler winning the Heisman, by the way. He was magnificent, even if the reality that Lincoln Riley has been the head coach of as many Heisman QB winners as Mike Gundy has Bedlam victories leaves me woozy.

Don't worry #okstate fans, Oklahoma has back-to-back Heisman winners, but #okstate has the No. 44 recruiting class for next season.

• This Gundy-Les story is A+, and the picture associated with it is even better. I wish Gundy still coached the way he looks in this picture. 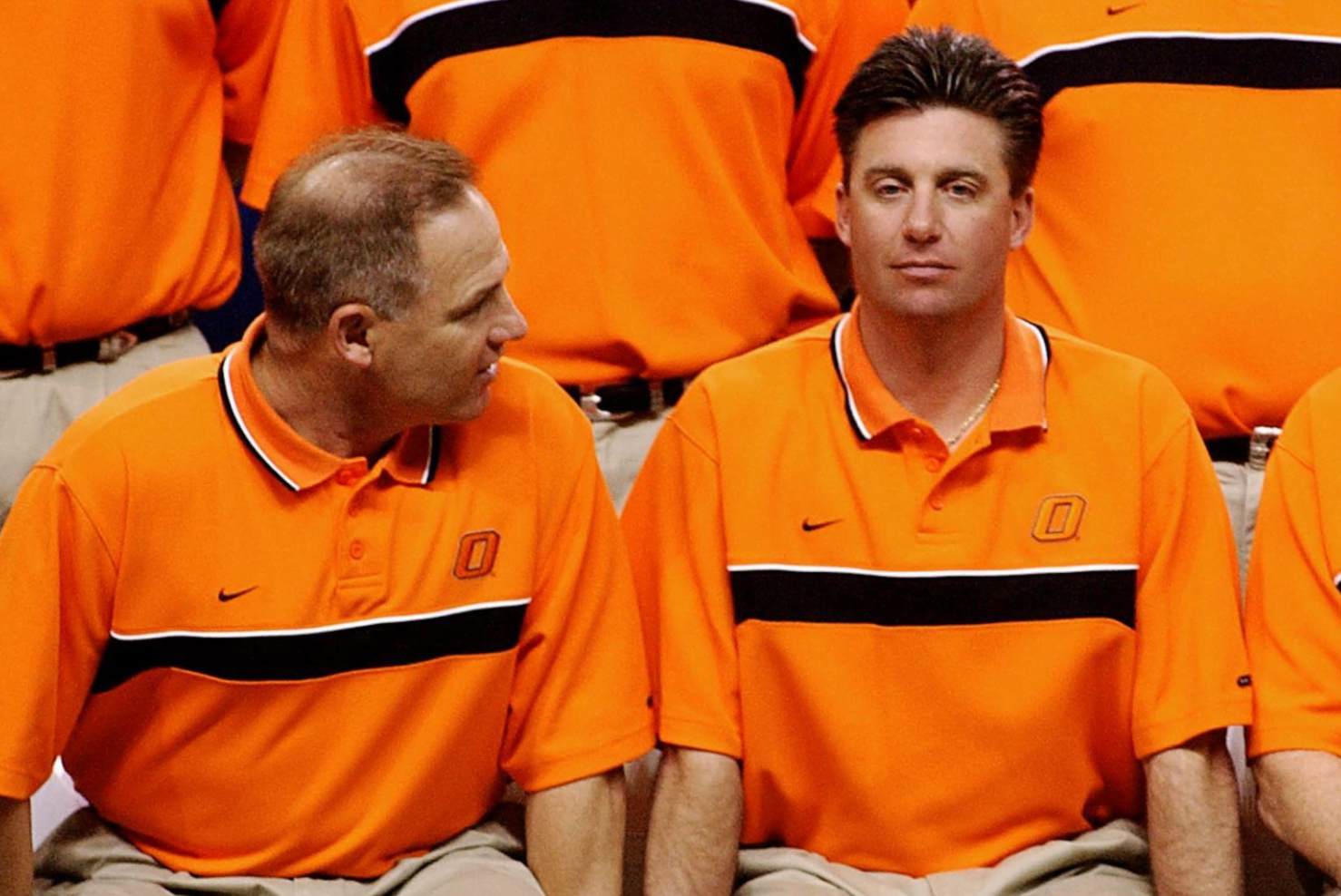 • Nobody knows what the heck to do when it comes to scheduling. This is an unintended trickle down of having a system that is not, at its heart, a meritocracy. Anyway, The Big Ten wants to go to the top two teams playing for its conference crown, which Berry Tramel think is nuts (and I agree with).

What the Big Ten needs more is to politic for better scheduling across other conferences. The more pressure that other leagues can put on the SEC and ACC to upgrade scheduling, the better. The SEC, particularly, schedules three virtually-automatic victories per year per school. The Big Ten, Big 12 and Pac-12 members typically schedule no more than two. [NewsOK]

• Do you guys read the NYT’s By the Book posts? I love them and binge read a handful every few months or so. I went through Elle Kemper’s, Michelle Obama’s and Ben Sasse’s recently. This from Obama was ? …

I love books that make me laugh every now and then. It’s something I hoped to do with my memoir, “Becoming,” because even if a book takes on serious topics, I think it should still be fun to read. [NYT]

That’s always kind of been my philosophy with PFB: Even if a website takes on real news and journalism, I think it should still be fun to read, especially if it’s about sports.