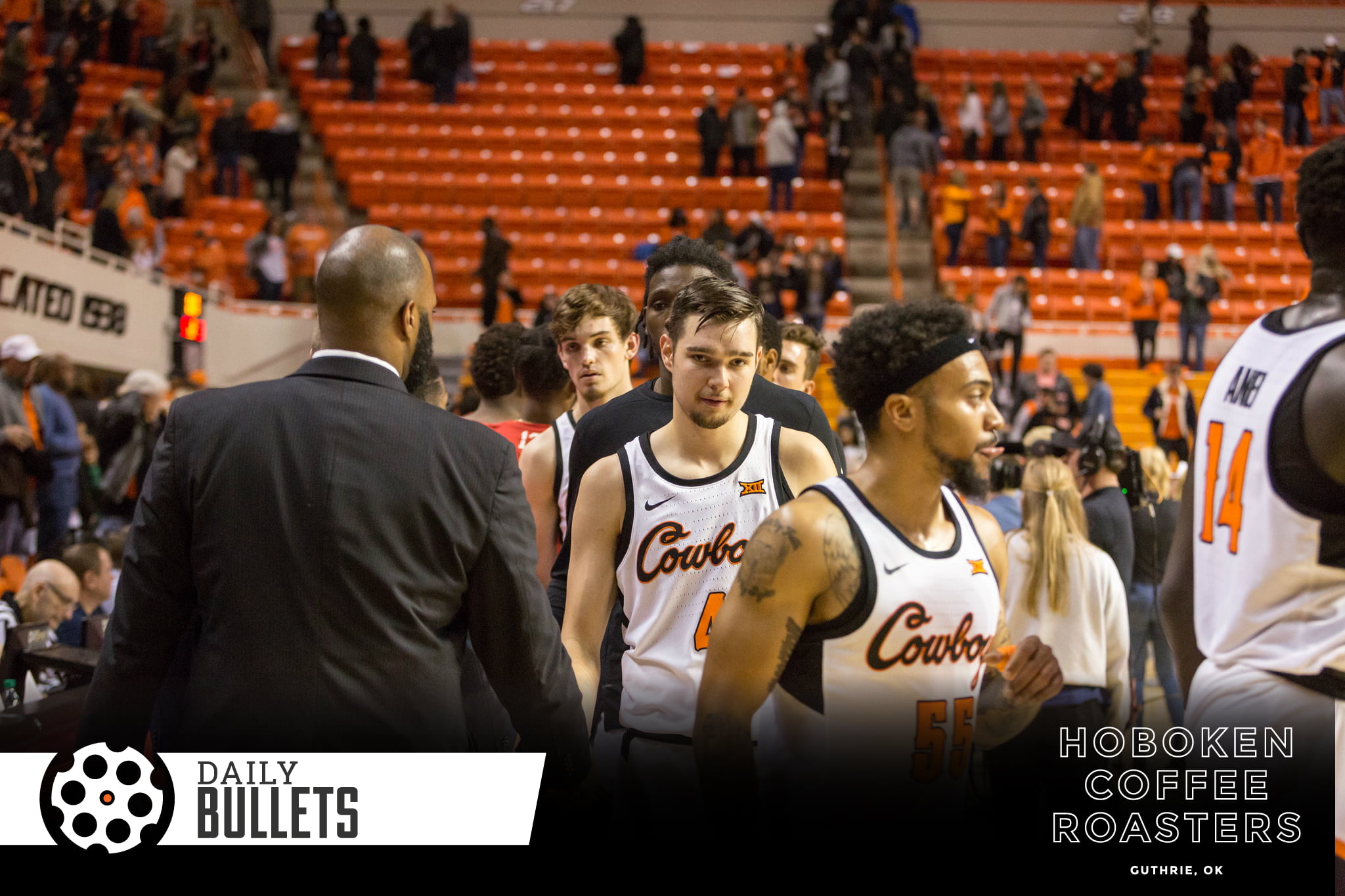 If you’re in Austin anytime soon, the best thing we did was Radio Coffee and Beer, which had two food trucks in the back — Veracruz and Paperboy. Our kids loved it. We loved it. Awesome time.

• Sounds like Yurcich2Tennessee could still be a thing, but Mike Gundy wouldn’t know if it is.

“What happens now in most cases, if guys are on the road recruiting, they don’t even show up at a place and interview,” Gundy said. “They meet somewhere in recruiting in Dallas at night and they’ll do it at a hotel or whatever.

“I’ve told guys on our staff if they want to do that, it doesn’t bother me. I’m not getting involved in that anyway. I’ve never tried to keep a coach here that wanted to leave. So I said, ‘If you guys end up taking jobs, you need to come tell me. Otherwise, you don’t need to waste my time.’” [Tulsa World]

I actually like that a lot. If you hire good people they should be getting calls like that and you should be OK with it as long as it doesn’t interfere with my job. Get back with me if ESPN comes after Kyle B. this week!

• Oklahoma State is unfortunately not very good at collegiate basketball this year.

This nonconference schedule has been tough, and the Cowboys haven’t come out of it shining. The experience gained throughout this rough stretch will no doubt help the Pokes later in the season, but it could be good for the Cowboys to get out and gain some confidence before conference play. At 4-6 this season, the best the Cowboys can do is .500 before the start of Big 12 play. [PFB]

I think these things can flip in a hurry, but this season is going to be a rough one. It would be pretty stunning if OSU doesn’t finish 10th in the Big 12 in 2019.

Here’s how the B12 looks right now according to KenPom. 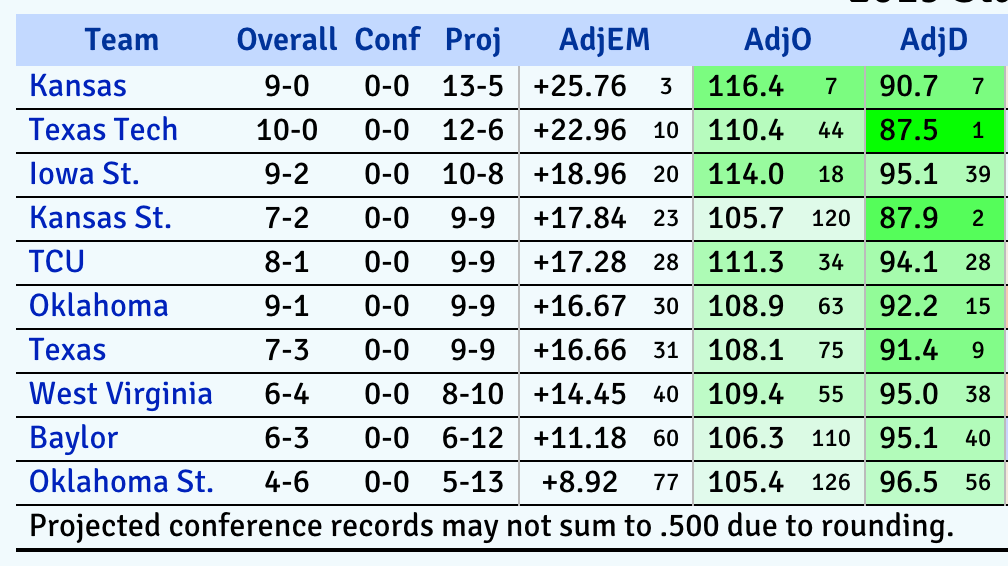 • Blake Jarwin is having a really nice season for the probably playoff-bound (?) Dallas Cowboys. He talked to the Oklahoman about it last week and how important it was for him to learn under Jason Witten before Witten jetted for MNF (which maybe hasn’t been the greatest thing!).

Jarwin said Witten was an excellent mentor and taught him what it takes to be successful in the league.

“You talk about an incredible experience,” Jarwin said. “To be in the same room as a Hall of Fame tight end, it’s a dream. He had so much wisdom for me and taught me a lot. I can’t say enough good things about the guy. He helped me out tremendously.” [NewsOK]

I know we like to (ok, I like to) poke fun at Gundy for his rags to riches theories in recruiting, and while I still stand by the overall premise, it’s also fun to see successes like Jarwin. No college scholarships to TE for the Cowboys in a half decade. ‘Merica baby.

• Robert Allen thinks Corn will get a NFL Combine invite and thinks he’s worthy of more credit than he’s getting.

The strangest part of all this, unless I keep hearing a vocal minority, there is a chance that Cornelius legacy will be more illustrious and respected in other locales and from other groups than the Oklahoma State fan base. I certainly hope not. He’s as loyal and true as any Oklahoma State student has ever been and deserves the same. [Go Pokes]

• Remember Mike Gundy’s idea for an eight-team CFP a few years ago? There’s talk of it happening, but as Berry T. writes, there are possible hurdles to clear.

Hard to argue that you’re trying to be as prudent as possible for players’ health and at the same time expand the season. Lawyers aren’t likely to sign off. And school presidents listen to lawyers more than they listen to former football coaches miffed at not making the Orange Bowl.

So Bowlsby is right. Perhaps it’s time to begin thinking about expansion. But Alvarez is wrong. An eight-team playoff is not inevitable. [NewsOK]

“I know they have a 12-year contract,” Gundy said as Kyle Fredrickson documented for the Oklahoman. “But they’re gonna change it and they’re gonna go to eight teams. The solution is let the conferences battle it out.

Costello, who had an offer from Georgia among other programs, was heavily recruited by offensive coordinator Mike Yurcich. And though Yurcich’s name has been in the news in connection with Tennessee’s vacant offensive coordinator position, Costello hasn’t paid any attention to it as Wednesday’s early signing period nears.

“That’s something I kind of block out,” he said. “It’s part of the business, but I haven’t heard much about it. I block out that noise and focus on the things I can control. I’m not worried about it at all. I’m not a big Twitter person. I don’t use it much. I’m sure Coach Gundy will appreciate that.” [NewsOK]

• Trace Ford visited Stillwater over the weekend. There might be a little Jordan Brailford potential there. Maybe?

“It (visit) went really well,” said Ford, who was able to watch the Cowboys practice both Friday afternoon and Saturday night. “I did get a lot of one-on-one time and was able to see a lot of football with practice. They did talk to me about playing “Leo” defensive end.”

• Enjoyed this on KSU’s hire to follow Bill Snyder. It always comes down to recruiting, doesn’t it?

Chris Klieman’s attempt to carry over Bill Snyder’s physical and disciplined approach to football has a chance to be a shock to the Big 12 and put the Wildcats back in contention, but it’s going to come down to recruiting.

Not whether Klieman can recruit Texas or the south for skill athletes like the other programs around the league, but whether he can find the same kinds of big framed, physical bullies that he built the Bison dynasty around. If he can, the skill athletes from the JUCOs, Oklahoma, Texas, and Missouri are going to flock to Manhattan. [SB Nation]

• I enjoyed this on moving from the city to the country in New York, but mostly I am jealous of the name of the bookstore/bar noted in there. Elite. [NYT]

• This on Melissa & Doug toys was terrific, too.

Reports have claimed the company sells more than $400 million worth of toys annually; though the company declined to share sales figures with Vox, a rep said the actual number is higher. [Vox]