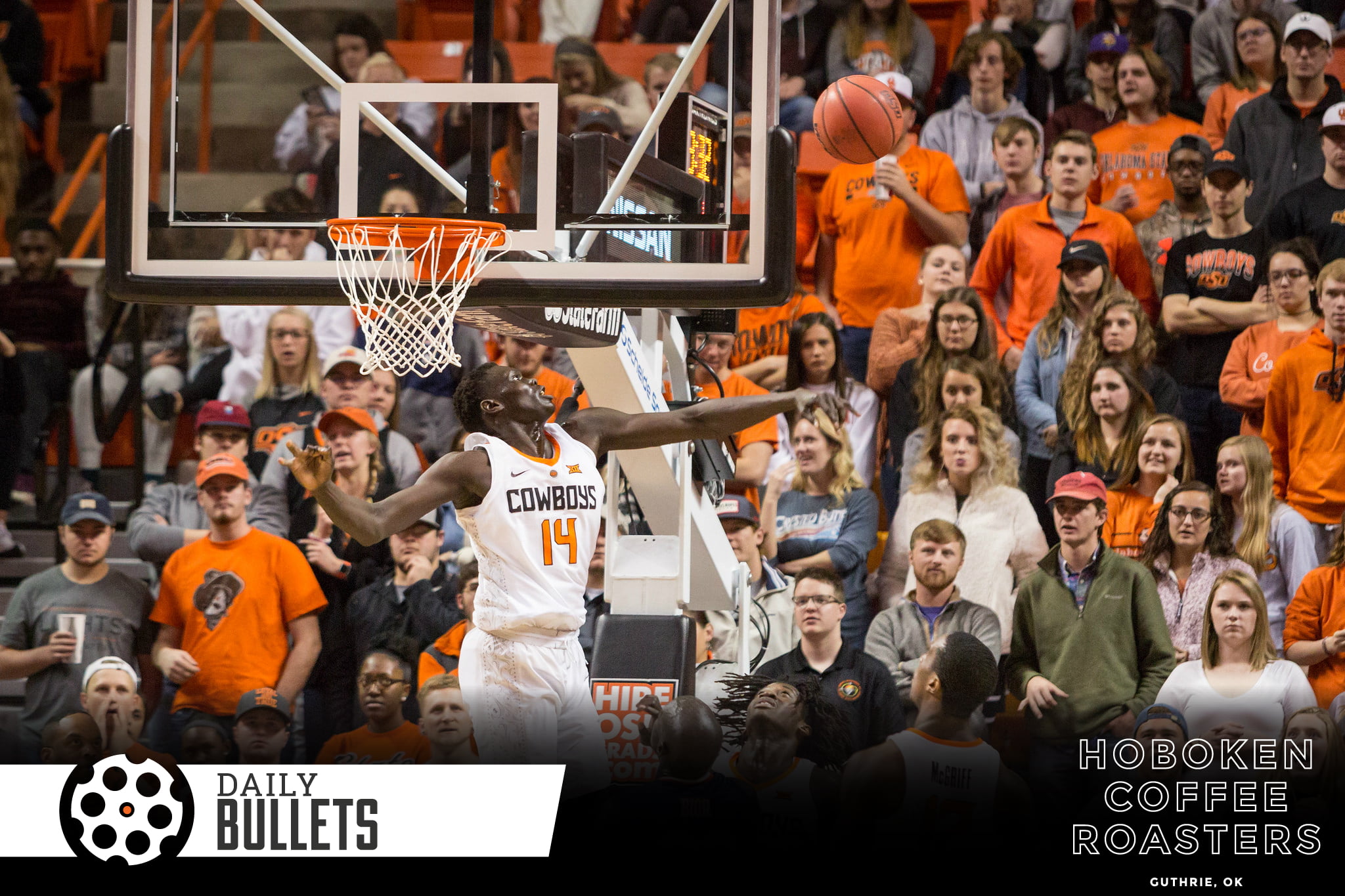 Say it with me: Roll Tide. I had a lot of fun typing in “college football – run rule” into the Google machine in the first half last night. While it was somewhat shortlived, reading the following terms and considering how they applied to the situation about OU football made my day:

A mercy rule, slaughter rule, knockout rule, or skunk rule ends a two-competitor sports competition earlier than the scheduled endpoint if one competitor has a very large and presumably insurmountable scoring lead over the other. It is called the mercy rule because it spares further humiliation for the loser. [Wikipedia]

It didn’t particularly show up in all of the statbook, as OSU actually lost the turnover battle 15-13, but the Cowboys held TAMU-CC to 34-percent shooting, the lowest a team has shot against the Pokes since UTSA shot 33-percent on Nov. 14.

Myles Smith, the Islanders’ point guard, entered Saturday leading his team in points per game with 11.8. Against OSU, Smith had zero points on 0-for-9 shooting. [PFB]

Also – this is probably the best thought to keep in mind as you watch this team:

It is important to remember #okstate has a young team, a difficult schedule and a top-20 recruiting class coming in next season. https://t.co/Eo1JYW8Lki

Hey, works for me. I can’t recall a time I’ve watched an Oklahoma State game the past five years and thought bad things about the quarterback play. That team averaged 36 points a game this year and 45 the year before.

I don’t think it’s necessary to mail them film of the K-State, TCU, or Texas Tech game from this year but I do think Yurcich has done a solid job of getting the right guys on campus and developing them. We won’t say “fantastic” as past targets like Myles Brennan and Nick Starkel who would likely be upperclassmen that played in 2018 for other teams but if Spencer Sanders pops…

But Go Pokes can now officially report that Mike Yurcich has been offered the Offensive Coordinator position at Tennessee and at a substantial bump in pay than what he’s currently making at Oklahoma State. [GoPokes]

Mike Yurcich reportedly took his name out of the Auburn search last year – it’d be tough for you to convince me this is a better situation than that one was. Working with offensive mastermind Guz Malzahn would have been a heck of an opportunity for a developing coach.

Drew Lock’s last game at Missouri will be against the man who was his offensive coordinator for his first game as a Tiger. Oklahoma State offensive line coach Josh Henson was running the Missouri offense when Lock was a freshman and found himself thrown into the starting role. Asked about their relationship on Friday, in advance of Monday’s Liberty Bowl, Lock spoke strongly about the importance of Henson in his development as a quarterback. [NewsOK]

There are a couple interesting angles to that – what kind of unique insights would Henson have as a result of that relationship and with all of the Yurcich talk, it’s worth filing away Henson’s experience.

Sure seems like targeting if the defensive player did this pic.twitter.com/BSkdl2tcjQ

My own anecdotal experience suggests that those who have a deeper foundation of factual knowledge are better at creating analogies, pictures and extending the knowledge to new situations. [Scott H. Young]

I think this one boils down to personality and personal preference but I agree with the quote – I think people who have a broad knowledge base (or at least knowledge intake) can communicate in more interesting ways. I think I prefer that conversationally, in podcasts and in what I read.

And noting your gratitude seems to pay off: There’s a growing body of research on the benefits of gratitude. Studies have found that giving thanks and counting blessings can help people sleep better, lower stress and improve interpersonal relationships. Earlier this year, a study found that keeping a gratitude journal decreased materialism and bolstered generosity among adolescents. [NPR]