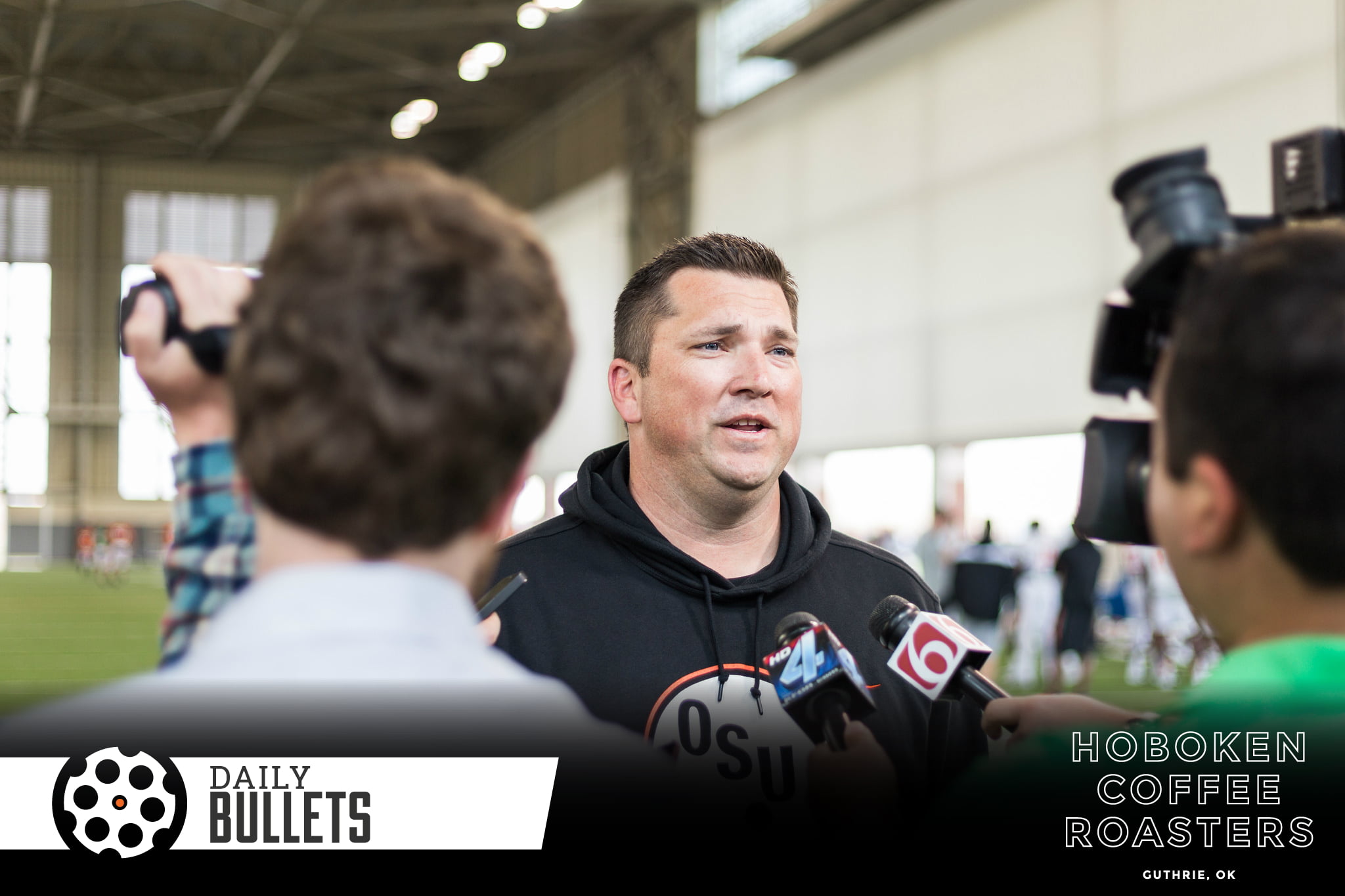 “There is only one way to eat an elephant, a bite at a time.”

• Most Viewed Article (No.1): Kasey Dunn Interviewing at Oregon

This is and Henson’s departure must be a direct effect of the Sean Gleeson hiring, right? “You don’t want to promote me? Fine, I’ll go get a big fat raise for how well I’ve done here.”

We can’t know if there’s sincere interest on Dunn’s part or if the interview is a bargaining chip for a raise. The Oregon coach could promise Dunn he’s first in line if Marcus Arroyo doesn’t work out. Who knows but I will say this – the Gleeson hire is at least an intermediate-term decision that Gundy plans on seeing through.

A common misconception about OSU recruiting is that Gundy and Co. don’t even offer the big dogs. They’re notoriously stingy (and honest) about their scholarship offers but they will make the first call to the studs.

I think the reason why this is the second-most viewed article this week is the specifics around Stone – DFW kid, superstar, excels in the RPO offense. If the Pokes could ever sign one of these guys, it’d be fascinating to see how it impacts a class.

• Most Viewed Article (No.3): Mike Gundy’s Four-Stars That Didn’t Pan Out

Boy, that article was chilling. OSU signs fewer four-stars than Alabama signs three stars, they tend to stick out in a class. Another name that came to mind for me was Louis Brown, a late-add to the 2015 class. Some of these guys were sort of a throw-in, a late-add that appeared to have missed out on other options and found a home late in the cycle. That’s certainly not the case with the likes of Devon Thomas (early enrollee) and Herschel Sims but you can throw out at least a handful of those busts.

Boone’s point here was about a unique recruiting situation – a near ghosting. In today’s world full of social media posts requesting fans and onlookers to “plz respect my decision, I’m opening up my recruitment” – Josh White put nothing out there. Coaches can’t comment on recruits, so until a third party reaches out to confirm, the only information out there is what the recruit puts out.

Encouraging news here – of the eight early arrivals, three are defensive lineman and the fourth is a linebacker. For a unit replacing five of its front six defenders, reinforcements arriving ASAP will only be beneficial.

• So Josh Henson is gone – here’s my favorite (long shot) candidate for Gundy to hire.

It appears that Gundy wouldn’t be interested in calling his old employee but my goodness, wouldn’t it be incredible to have Joe Wickline in Stillwater for the rest of the Gundy era?

This is a sad note in the Henson saga.

If this is true that Henson sad down with Gundy and entire Athletic administration prior to accepting the job, it should tell you a lot. The money isn't there. If there was anyone on the staff to try and overpay to keep it was Henson. https://t.co/B2Rf0UHkrd

• It’s a nearly unprecedented level of basketball mediocrity in Oklahoma basketball this year.

This college basketball season stinks in Oklahoma. The OSU men and the OU women will not make the NCAA Tournament, barring Big 12 Tournament miracles. The OU men and the OSU women are longshots to make it.

And if all four are shut out, here’s how historic will be the 2019 post-season. It would be the first time since 1982 that the NCAA Tournament will be void of OU or OSU teams.

That’s 37 years. In 1981-82, the women’s NCAA Tournament hadn’t even begun yet. Billy Tubbs’ second Sooner team was in the NIT. Paul Hansen’s Cowboys were a year away from ending OSU’s 18-year NCAA drought. [NewsOK]

• One of the big time perks of a down year is the player development.

(Yor) Anei scored a career-high 20 points on 7-for-7 shooting, while (Isaac) Likekele, an Arlington native playing with plenty of family in attendance, added 17 points.

“It’s one of the kinda silver linings,” OSU coach Mike Boynton said Monday. “It’s good for them because they’ll have this experience moving forward for the rest of their careers.” [NewsOK]

Now – you have down years consecutively and you establish a losing culture. But players go from young to experienced with lots of minutes.

Thomas Dziagwa on the development of Yor Anei and Isaac Likekele: "It should make every Oklahoma State fan happy.” #okstate

• Winners and losers from the NBA Trade deadline

• Challenging faith-based look at being a husband