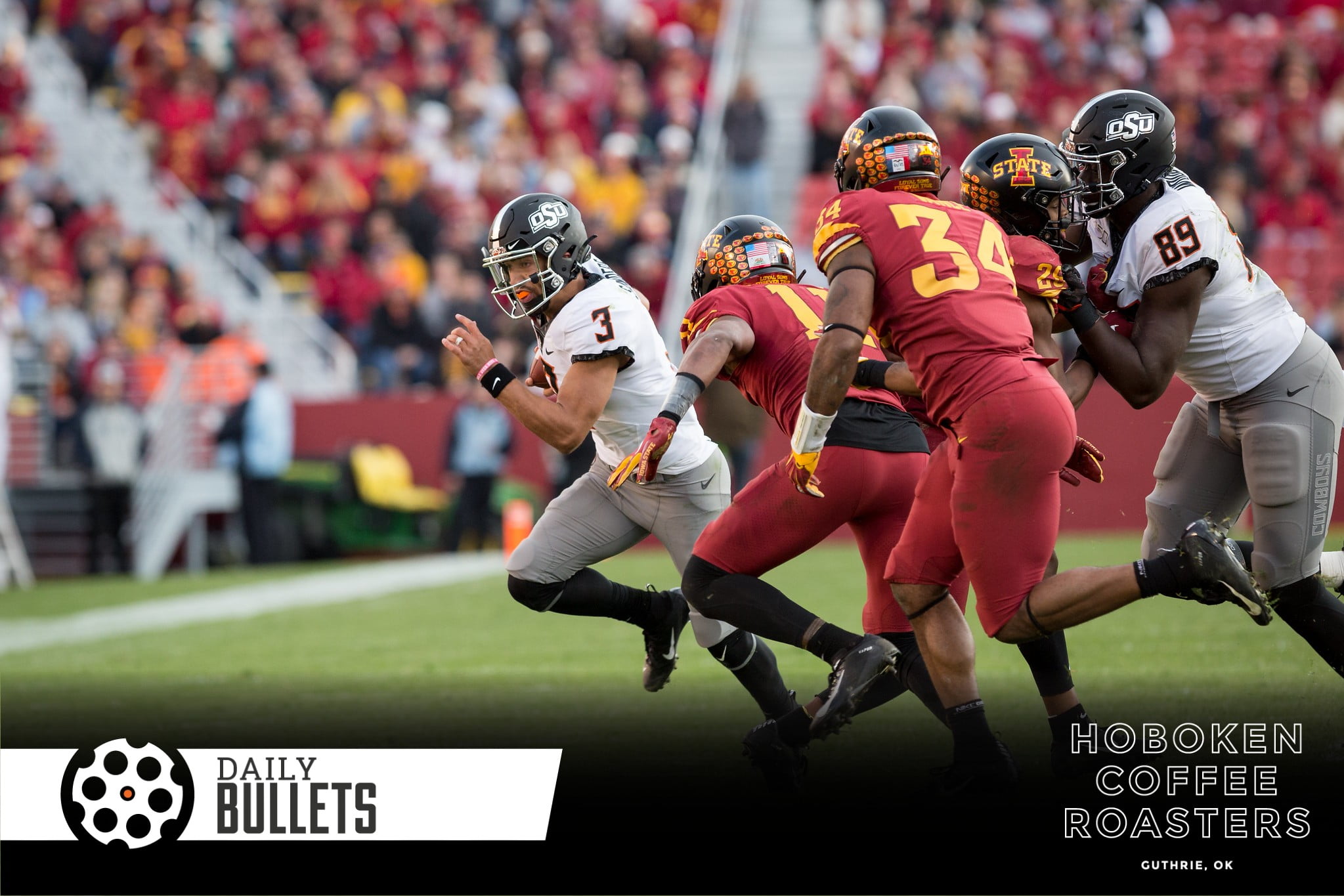 I’m not deep in the recruiting game but I need this four-star 2021 running back on campus (from the Chamber).

• Here’s a solid take on why OSU will win between eight and ten games in 2020:

Honestly, with Spencer Sanders in year two I think returning either of those two guys was going to guarantee that OSU made a big leap on offense in 2020 and now they’re assured of having at least one of them. On defense, OSU played some pretty solid ball in the defensive backfield with their new dime approach. Next year they return disruptors Amen Ogbongbemiga and Trace Ford and a variety of big DL (Israel Antwine) that might be much closer to solid after another offseason.

I think Gundy still has things working at their normal level in Stillwater and that with a more savvy Sanders behind center we’ll see an 8-10 win kind of team. [Concerning Sports]

It’s hard to imagine this next iteration not going for at least eight wins, right?

• Marshall had some solid takes on the OSU/WVU game late Monday night – this one on the cause of the struggle was surprising.

It was a bad shooting night for the Cowboys on a night they couldn’t afford one. Off the top of my head, I’d say at least half of OSU’s first 16 3-point attempts were open looks. If they hit four of those, things could’ve, should’ve, would’ve looked different.
OSU also went 12-for-20 from the foul line. Not the worst game in school history, but a few of those misses were the front end of one-and-ones.
I’m not sure anyone anticipated shooting being this team’s downfall, but it has been two games into conference play. [PFB]

60 percent on your free shots isn’t terrible. But that combined with the three-point shooting leaves a lot of meat on the bone with nobody to blame but yourself.

• On a more optimistic note concerning Cowboy Basketball, Boynton’s thoughts after the game were really good. There was solid defensive intensity from those capable (*looks at Hidde out of the corner of eye*) and it’s a valid point that you won’t shoot like that every night.

• How Matthew Wolff is managing expectations (via Golfweek)

• Pretty wild how much Pete hasn’t changed over time

Ok just one more pennant tweet and I’ll stop. But these pennants that have Pistol Pete on them are just too cool not to share #okstate #GoPokes pic.twitter.com/Yzj2jjPnoj

• You assume not, right? Comments like this are meant to get a response but the way Gundy has handled his tenure invites them.

Will Baylor hire a coach before Gundy gets the chance to use it as leverage to get a raise from OSU?

• Two great faith-based articles: ten questions for the new year and one on dads engaging with their kiddos both with quality and quantity of time

• Tom Hanks’ take from his Golden Globe speech on career success was golden:

And there it is, a simple, brilliant, three step-formula for success:
Show up on time, know the text, and have a head full of ideas.
Hanks says “that was the greatest lesson a young actor could possibly ever get.” But in reality, the wisdom in that single line will do wonders for your career, regardless of what industry you work in. [Inc]