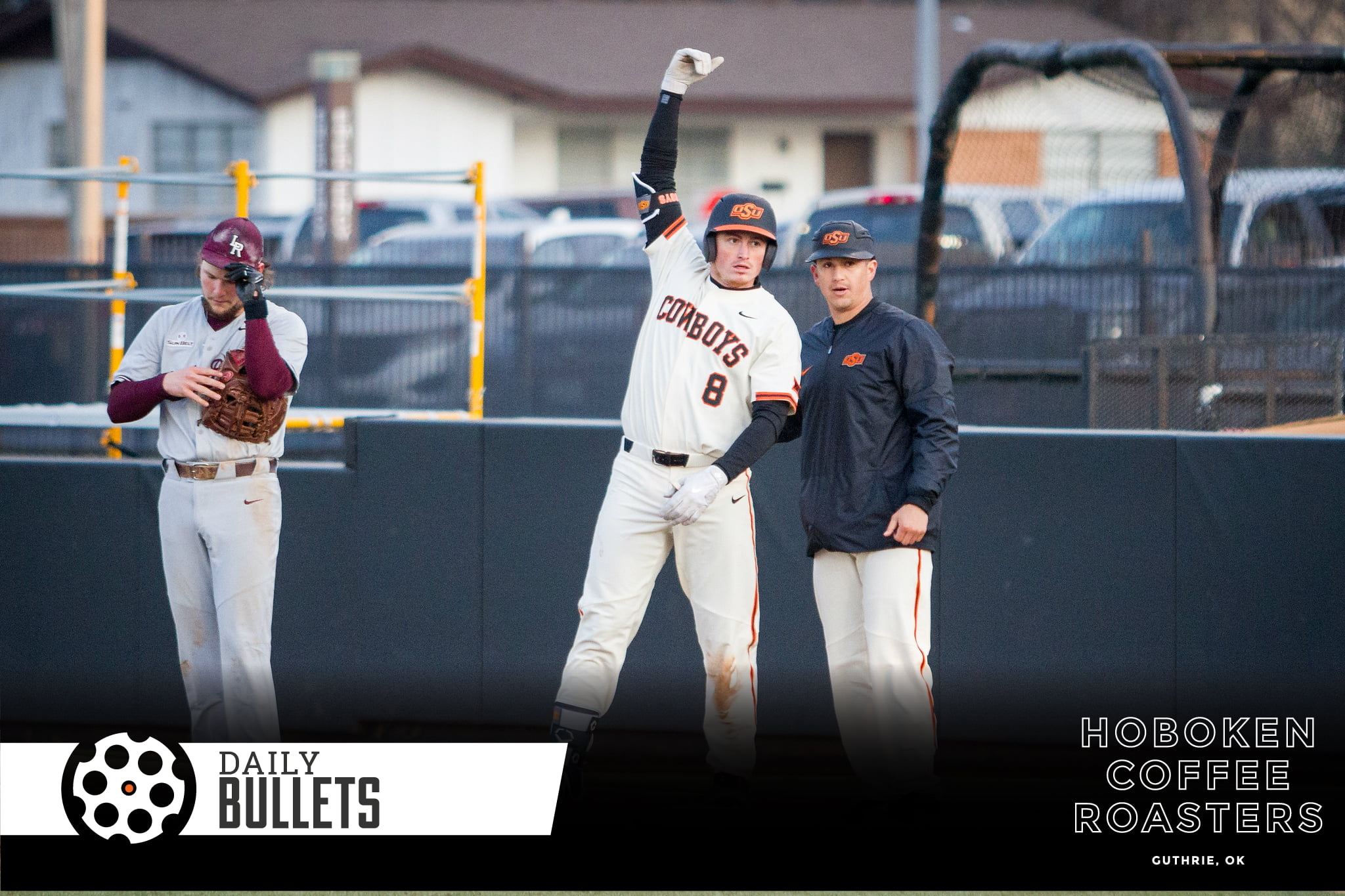 No casualties to report from the flu epidemic of late February, let me know where the Jayhawks are staying and I’ll go rest in the lobby.

• This is a great point about the current version of Cowboy Basketball – they keep fighting.

But what a night for OSU basketball. What a memory for Waters, who had a shooting display to rival what Randy Rutherford did 24 years ago at Allen Fieldhouse, scoring 45 points on the Jayhawks. What a memory for Mitchell, who a month ago was playing pickup basketball at the Colvin Center and Wednesday night dang near took down the 11th-ranked team in America.

And what a night for Boynton. It’s hard to get too excited about a coach whose recruiting decisions led to this debacle of a season. But man, Boynton can keep a team together. [NewsOK]

That last paragraph hones in on it – there’s concern over recruiting practices that led to this point but the continued fight gives optimism.

Another angle – there’s such a fine line between developing players for next year and establishing a losing culture – I think after games like Wednesday night, it looks like the former is truer than that latter.

In a season full of moral victories for Oklahoma State, the thing you always walk away from watching them is their effort. Mike Boynton has instilled a competitiveness that will stay in Stillwater as he builds his program. Have to think better times are ahead.

• You could talk me into being excited about two things for the Cowboy offense this fall – the creativity of a new coordinator and the offensive line he’s working with.

All signs point to (Charlie) Dickey being a great hire, having groomed young linemen into strong units at Kansas State, and looking like a perfect complement for Gleeson’s QB run game blocking schemes.

So much of a young quarterback’s success is beyond his control – the line he plays behind, the threat of a viable rushing attack, and receivers that make him look good.  I’m struggling to conceive what could potentially slow down Spencer Sanders from that group.

• Cowboy Baseball added an impact graduate transfer at the catcher spot – but his impact isn’t limited to his spot in the lineup.

Carter, a graduate transfer from Stanford but a Tulsa native, earned a degree in architectural design during his time with the Cardinal, and the catcher has found good use for it in Stillwater. [NewsOK]

Carter pulled a Barry J., finishing his degree in Palo Alto then his eligibility in Stillwater – I’d like to start calling it the “brain drain”. But you wonder how often coaches go after transfers for multi-faceted reasons: perhaps to share more about the culture of a winning program… or help design their stadium.

• Review here what the Pokes will be fighting for when the Jayhawks come to town Saturday.

What could actually happen here is that OSU could take Kansas out of it completely with a win over the Jayhawks in GIA this weekend. A loss there would mean that for KU to keep its Big 12 title streak of 14 in a row alive that Tech and Kansas State would both have to lose two more games just for KU to share a 15th in a row. That’s not going to happen. [PFB]

One of the PFB guys mentioned they don’t want KU to lose unless it’s OSU dethroning them and I respect that. I think it would mean more to K-State fans to do it but if you’ve been a Texas Tech Basketball fan since before last season’s Elite Eight-run, it’d be tough to convince me you don’t deserve to break it either.

• I still can’t get over what Lindy Waters did on Wednesday night with those four threes late in the game.

He hits 4 threes in under a minute to send Oklahoma State to OT with Texas Tech. pic.twitter.com/VlmQfaZOA2

• Looking at the legal context around who owns buried treasure

• Decent look at how to read more in a year