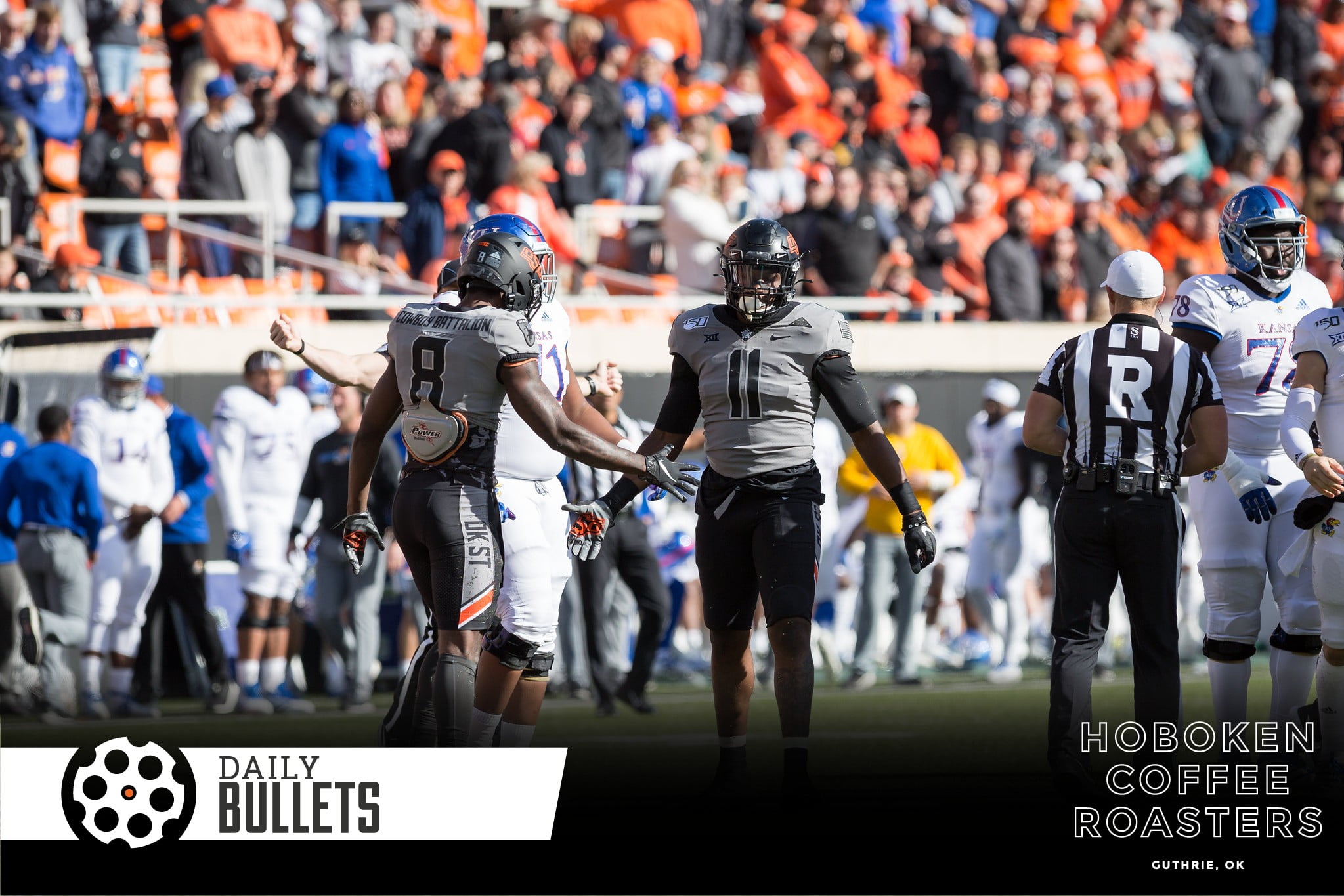 Good morning and Happy Monday. Here are your freshly-loaded Daily Bullets to get your week started on the right foot.

• Baylor — for the third (!!) time this season — is being forced to postpone a game because of CoVid. This time, it affects Oklahoma State: the originally-scheduled Oct. 17 showdown between OSU and Baylor is being rescheduled, the Big 12 announced Sunday night. The game is being moved to Saturday, Dec. 12. Here’s the statement from the league:

“The Big 12 Conference announces the postponement of the Saturday, October 17, Oklahoma State at Baylor football game. Upon the recommendation of medical advisors, Baylor is suspending football operations temporarily after multiple positive COVID-19 test results. The game has been rescheduled for Saturday, December 12. The Dr Pepper Big 12 Championship remains tentatively scheduled for December 12 or 19 pending game results needed to determine the championship game participants.”

This tweet pretty much sums it up. Baylor had to pause workouts last week so this felt like a real possibility, but a huge bummer nonetheless that serves as OSU’s first in-season disruption in league play.

In related news … some obvious frustration among OSU players. And easy to see why: this team is on fire right now. Getting consecutive bye weeks is a brutal beat (though, obviously, health and safety comes first).

This means OSU’s schedule is entering a double bye (bye this past weekend, bye this upcoming weekend) with only one bye — between K-State on Nov. 7 and before Bedlam on Nov. 21 — left on the slate.

• Good story here from Jacob Unruh of The Oklahoman on Amen Ogbongbemiga on his battle with CoVid-19 and his rise as a leader in OSU’s locker room. He says he regrets sharing his diagnosis publicly in part because of how much attention he got after sharing the news.

• Not a surprise, obviously, but Oklahoma State stayed at No. 1 in Berry Tramel’s Big 12 power rankings.

The Cowboys have navigated the early part of the season in the best possible manner, winning with defense and with freshman quarterback Shane Illingworth, while Spencer Sanders heals.

• Matthew Wolff finished runner-up to Martin Laird on Sunday in the Shriners Open in a thrilling playoff, further cementing his legacy in the game right now as one of golf’s best and brightest young stars.

• This will be must-see.

Yesterday was Desmond Mason’s birthday. As such, please enjoy these highlights.

• LeBron James won his fourth NBA championship Sunday night and thus officially became the greatest basketball player in history. (As if there was any doubt.)

• Pretty wild NFL Sunday with a ton of schedule changes. Found this article to be pretty helpful and insightful, especially if you’re managing fantasy football rosters or trying to keep up with all the moving pieces.

• It Had to Be The Lakers (from The Atlantic)