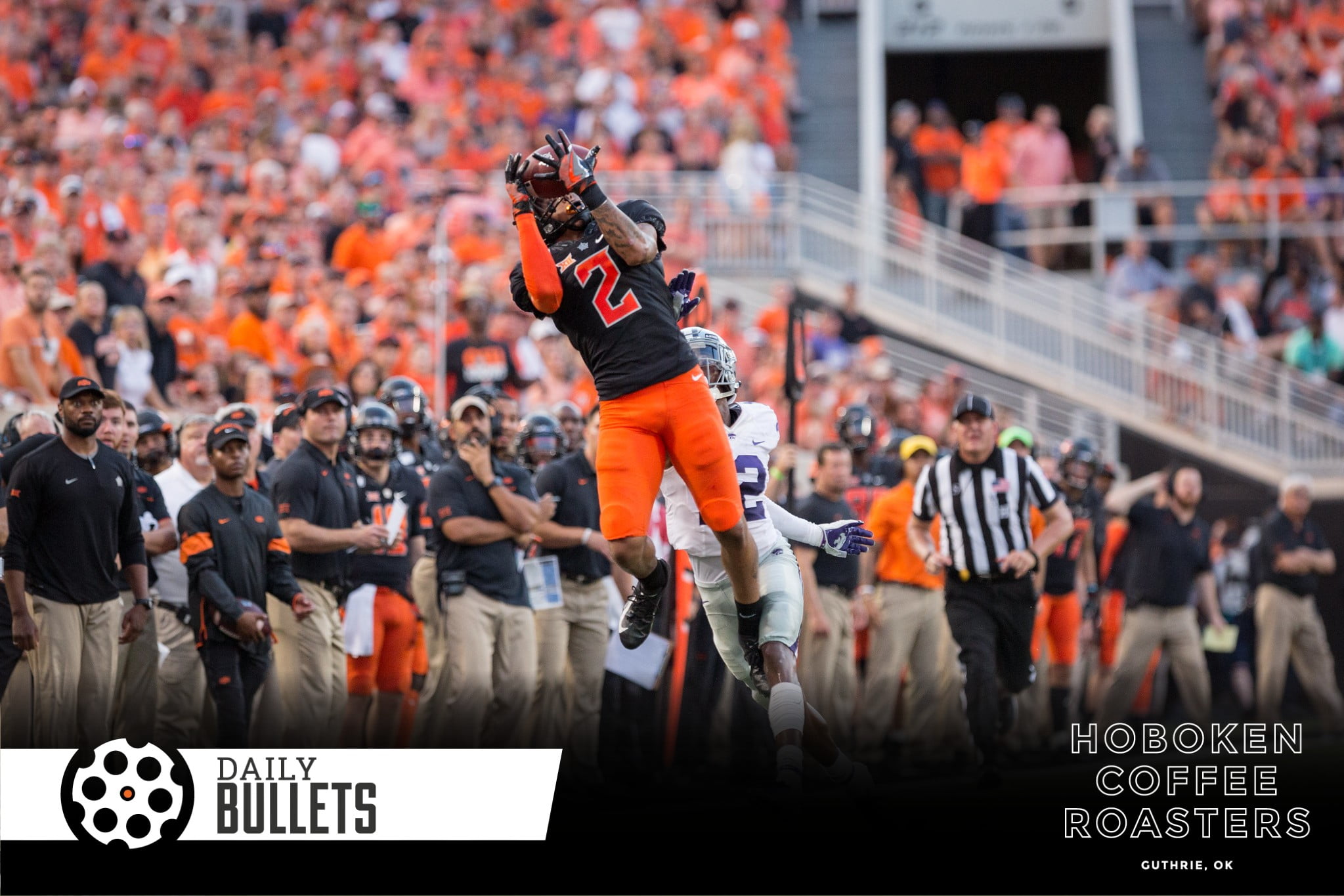 Glad to see the Chuba Heisman campaign is rolling.

• The Pokes brought back alum Barry Hinson as the first analyst to work with the basketball coach. His story coaching in the Missouri Valley, specifically at the University of Southern Illinois, may seem familiar in some respects.

Then came the perfect storm. A renovation of SIU Arena prior to the 2010-11 season displaced long-time season ticket holders, many of whom walked away forever. Declining performance on the court combined with an increase in academic and disciplinary concerns led to Lowery’s firing in 2012, and local newspapers reported a loss of $500,000 in ticket revenue over his final three seasons. Average attendance in his final year was 3,299.

When the school hired Hinson as Lowery’s replacement, the program was on the verge of academic probation. Its Academic Progress Rate was alarmingly low, and extraordinary measures were required to rescue the program over Hinson’s first few seasons. Eventually, Hinson and his staff steadied the ship, but his teams suffered through three losing seasons. [SB Nation]

• As an OSU fan, it’s hard not to look frustratedly at Jonathan Taylor’s season at Wisconsin and wonder what in the world I’m missing. But it’s helpful to see what unbiased third parties are saying when they compare Taylor to Chuba Hubbard.

(Hubbard)’s a talented running back and would need a few more 200-yard performances or four-touchdown games to gain on Jonathan Taylor with the way JT is running the ball. Hubbard is the second-best running back in the country at this time and at no discredit to him, is second only to the best back we’ve seen in some time at the college level. [PFF]

• It looks like Mason Rudolph will be in a position to keep his starting job as soon after the Steelers return from their bye week (this week).

Despite (Devlin) Hodges’ success, the Pittsburgh Post-Gazette’s Gerry Dulac and Ray Fittipaldo have reported that the Steelers plan to start Rudolph for their Week 8 matchup with the visiting Miami Dolphins. Tomlin brushed off a question about his quarterback situation following Sunday night’s win. [CBS Sports]

And it appears per an update today, that Rudolph has left concussion protocol.

Steelers QB Mason Rudolph is no longer in the concussion protocol, per team. He was cleared by an independent neurologist and will return fully after the bye.

• These reader questions on Chad Weiberg and Mike Holder were great

• This really surprised me that “centers” were the top of the list.