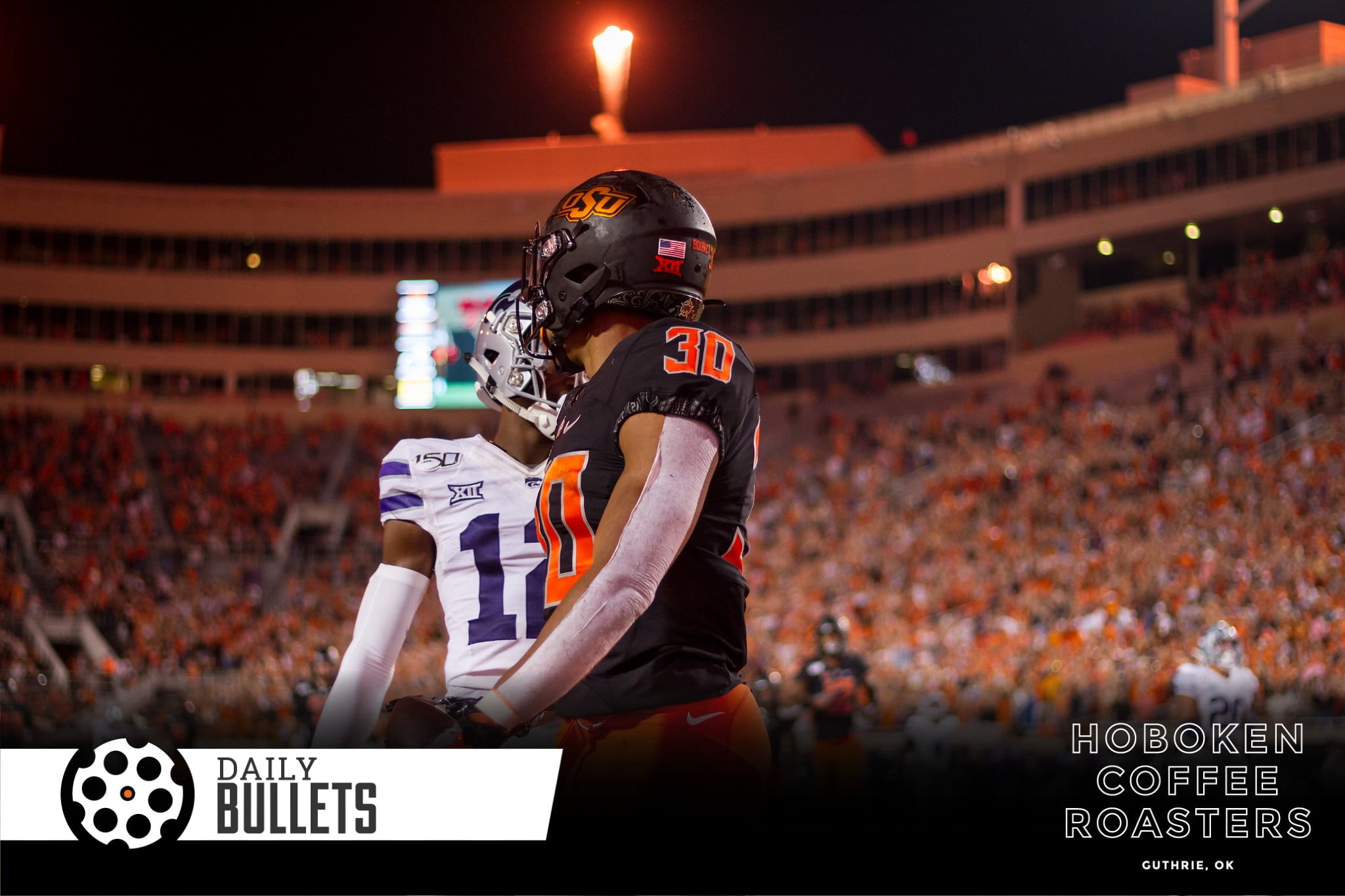 Gosh, homecoming is the most fun. Beat the Bears.

You belong at the home of America's Greatest Homecoming. #letswork I #gopokes pic.twitter.com/btOyU6Gt6T

• Most Viewed of the Week (No. 1): OSU Launches Chuba’s Heisman Campaign

I don’t know what the right timing on this is – what would have happened if OSU had started Dez Bryant a Heisman campaign after Georgia in 2009? Sure, a wide receiver campaign is a longshot but the point is that you don’t want to waste your time (draw unnecessary attention) to a player until it’s highly likely he’ll be able to handle the attention.

But Chuba’s webpage looks pretty cool and the Canadian angle is a unique angle. If he can somehow get a country behind me, this thing could gather some steam.

Gundy loves to quote how QBs evolve and grow after twelve to 18 games, he surely knows much better than I would. But I’m most curious about the incremental steps that occur up to that point. What Spencer Sanders looks like in games seven through twelve (or 13?) is the most interesting and significant data point for the second half.

How Chuba and Tylan finish off their Cowboy careers will be entertaining and worth the price of admission.

• Most Viewed of the Week (No. 3): JuCo Defensive End Tyren Irby Commits to OSU

Signing JuCo’s tends to pay off on their second year on campus – meaning Irby would hit his stride when this wave of freshmen (Trace Ford, Tyler Lacy, and Israel Isuman-Hundley) become upperclassmen. With Mike Scott and Amadou Fofana leaving campus this year, it’s a good play to get some age and experience onto campus.

Yes – the football schedule was the fourth most-viewed article on the site over the week. But a helpful observation is this – if Chuba can go 100 carries for the next three weeks after the bye week, he gets another break before OSU closes with Kansas, West Virginia, and OU.

Now – taking on the defenses from Baylor, Iowa State, and TCU won’t be a bed of roses either.

• Most Viewed of the Week (No. 5): Expert Projects Cade Cunningham to Kentucky

The Cunningham developments of late are a two-parter – the above (that a mostly always accurate pundit has him going to Kentucky) and that another five-star point guard just committed to UK, albeit the top 2021 point guard. Man, this is a tangled web we’re stuck in but it’s fun to be in the room for it, right?

On a different note, we’re not quite to a Dax Hill-esque situation (where it just feels like time isn’t moving), but I’m ready for this to wrap up.

• How Dana Holgorsen and Houston are tanking is kind of wild

• How to train your brain to remember almost anything

• An airline is testing a 20-hour direct flight