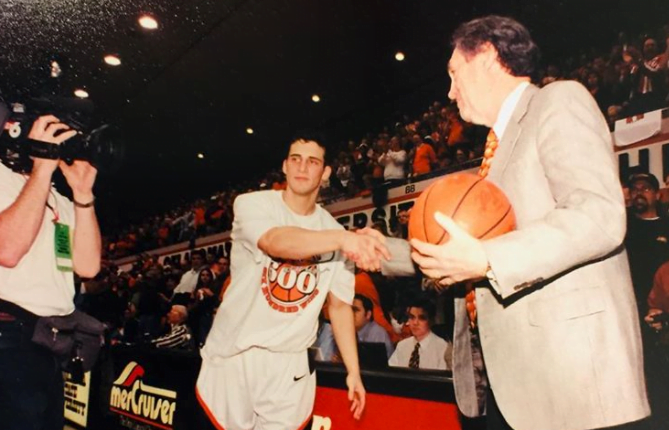 Eddie Sutton died on Saturday, and that’s really sad. But it’s also sweet to be able to look back on what he meant to the people whose lives he passed in and out of throughout the years.

Two of those lives that meant the most to me in my childhood belong to Doug Gottlieb and Desmond Mason. They were seniors in college when I was a freshman in high school, and boy are those freshman-in-high-school years formative.

I was enamored with their teams, with what they accomplished and with how they hooped. All things considered — and specifically because of the intersection of life, age and timing — I think you could probably say those Desmond-Doug-Joe Adkins teams were my favorite sports teams ever. I remember them so fondly.

So it was a joy to read what both men wrote on Saturday after Sutton died. Desmond first.

Right now I will remember the coach who told me he loved me for who I was not for what I could do! I’m so happy you are hugging and kissing Mrs. Sutton finally! You deserve to be reunited with your queen. Coach, you once asked me do I ever get emotional, and I said not really, I’m not really the crying type. You told me it was ok to show emotion … well I am right now. You are the best and no one can ever tell me different. [Instagram]

Onto Doug, who was just unbelievable here. I’ll pull a few snippets, but you can see his IG page for the whole thing.

You told us that when we play “Oklahoma” or “the Jayhawks” we ought to bring a pup tent cause it was war, not for the weak. You were right. Coach you imparted so much wisdom on us, so many simple demands that made us more disciplined men and better teammates, all while giving us the most honest feedback on earth, thank you … it remains an irreplaceable time of growth in all of our lives.

Coach, we never forgot to say “I love you” during our phone calls, all of us as teammates still do the same. You brought me personally closer to my dearest of friends, let us represent your (now our) school and gave me the chance to run your team.

One more thing Coach, I’m sorry we couldn’t get you your national championship. We all are. The Arkansas guys, the 92 and 94 teams (stacked), the 95 guys, my squad and the 04 team all feel this way. We wanted it for you, for our program, but mostly for you. We played hard, we went to class, we had so much damn fun and let us find ourselves as players and as men. [Instagram]

I don’t think about college very often. It was fun. I loved it. But it was a long time ago. A different chapter (that feels like a different life). Gottlieb’s tribute had me feeling college things, though. The term “irreplaceable time” resonates. College was certainly that for me, maybe for you as well.

To have a north star at that time as an athlete with your family distant and your parents gone for the first time in your life is impossible to overvalue. Gottlieb and friends clearly had that during their time in Stillwater, even as I watched from afar before my own college experience several years later.

So sometimes it’s good to look backward before returning to the forward march. Because sometimes looking backward reminds us of where we’ve been and how we got to where we are and that — as Eddie might point out — nothing really mattered between there and here except the people whose lives you passed in and out of along the way.