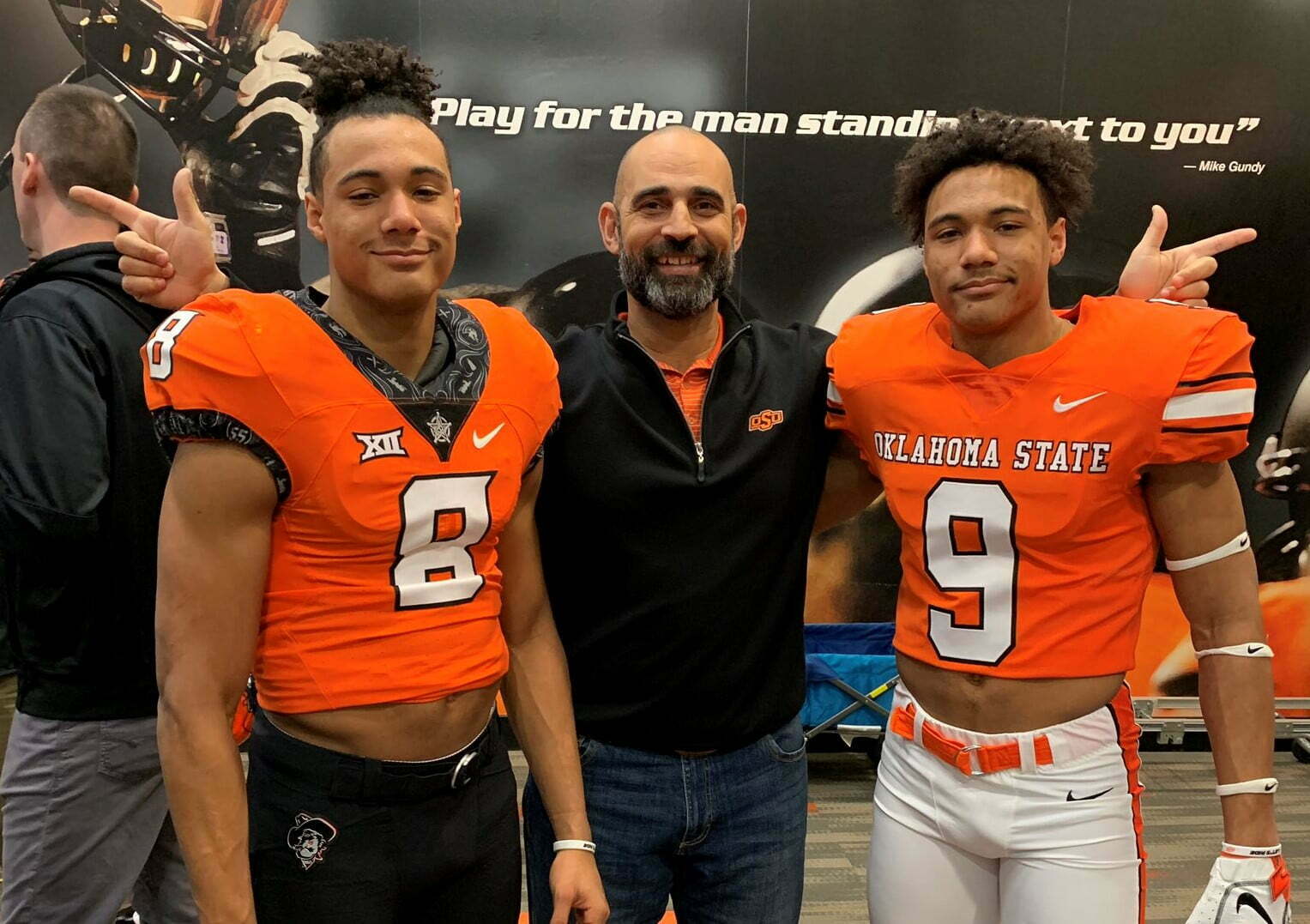 Next up in the 2021 recruiting class film study series, I take a look at the fifth-highest rated player in the class, three-star wide receiver Blaine Green. Before we take a look at the Texas wideout, you can find my previous breakdowns in this series below:

The Allen High School product had offers from Auburn, Baylor, Colorado, Duke, Kansas, Michigan State, Minnesota, Mississippi State, Nebraska, North Carolina, Ole Miss, TCU, Texas Tech, Utah, Virginia Tech, Washington and Washington State before signing with OSU. In addition, his twin brother and former Allen wideout Bryson Green is also a part of OSU’s 2021 class. The Green twins aren’t the first in their family to make it to the Power Five level either, as their brother Seth Green plays for Minnesota, which is also where their father Bryan spent his college playing days.

Similar to Bryson, Blaine played both basketball and football for the Allen Eagles. On the football field, he helped his team achieve a 10-1 record and reach the third round of the 6A-D1 Texas High School Football Playoffs last season. Additionally, he was named to the District 9-6A First-Team Offense and received all-district academic honors after making 42 grabs for 892 yards and 12 TDs.

In 2019, Bryson missed some time because of injury and during this period Blaine had to assume a larger role in the Eagle offense. Blaine proved he was up to the challenge as he hauled in 55 receptions for 1,063 yards, earning him an 6A All-State Honorable Mention.

I was able to watch Allen’s regular season matchups with Denton Guyer (11-3) and Braswell (5-5), along with the Eagles’ playoff game against Trinity (11-2). Below I’ll breakdown some of the key areas for wide receivers and how Green stacks up in each one.

Green was asked to run a variety of routes in the Allen offense both as an inside and outside receiver. He excelled at moving the chains and did a great job of using his 6-2, 210-pound body to get good positioning in front of defenders. He’s not the most polished route runner, and would at times have trouble snapping off comeback routes and making sharp horizontal cuts. However, I could tell there was improvement from his junior to senior year, and he has the athleticism and skill to fine tune this at the college level. He showed some of these skills on plays like the one below.

Green’s strength in terms of route running is his ability to play with physicality through the stem. He also uses his size to make himself a primary target in the red zone and consistently made plays for Allen in this aspect of the game. Additionally, he does well to find gaps in zone coverage and continues working when the play breaks down to find openings for his QB to get him the ball.

Although, I would like to see him utilize his hand strength and long arms more to create separation off the line.

Green remained balanced and didn’t get jammed or knocked off his path when the defender met him with contact at the line of scrimmage. There were instances on film of him winning at all levels in high school, and I think he has the ability to do this in Stillwater as well.

Green’s hands are excellent, and he uses his length to pluck the football out of the air and secure it away from his body. He routinely made difficult grabs and had some pretty incredible catches in traffic. Green is a natural at finding the football, tracking it and then adjusting his body and making the reception. In the following clip he shows off a nice grab against Trinity.

As I mentioned above, he’s a tough assignment for defensive backs in the red zone because of his athleticism, recording a 36-inch vertical at The Opening Regional in 2019, and physicality. He showed off his contested catch skills in this area several times on tape.

Green’s body control along the sideline is also impressive.

Along with his outstanding vertical jump, Green also recorded a 4.68 40-yard dash at The Opening Regional, and I believe he’s gotten even faster since that time was recorded in March 2019. In the following video, you’ll see Green show off that speed as he heads to the end zone.

This speed and his size allowed him to be a threat after the catch during his high school playing days. In addition, Green has solid vision and instincts when operating in space. He rarely was brought down by initial contact and has enough lateral agility to make a few guys miss in the open field. Below you’ll see Green break through two defenders and score.

Green, along with his brother, is one of the best blocking high school receivers I’ve ever seen. He is a high-effort blocker that looks to bury his opponents on every play, as you’ll see in the next video.

Green does an excellent job against both defensive backs and linebackers and uses his length well. He consistently brings the effort as a blocker, and I think he’s going to continue to excel in this area of the game at OSU.

I think that Blaine could come in and play right away for the Cowboys. He and his brother both possess the size and skill set that will translate well at the next level. There’s definitely still room for improvement, but I believe Blaine is going to have a great career in Stillwater.