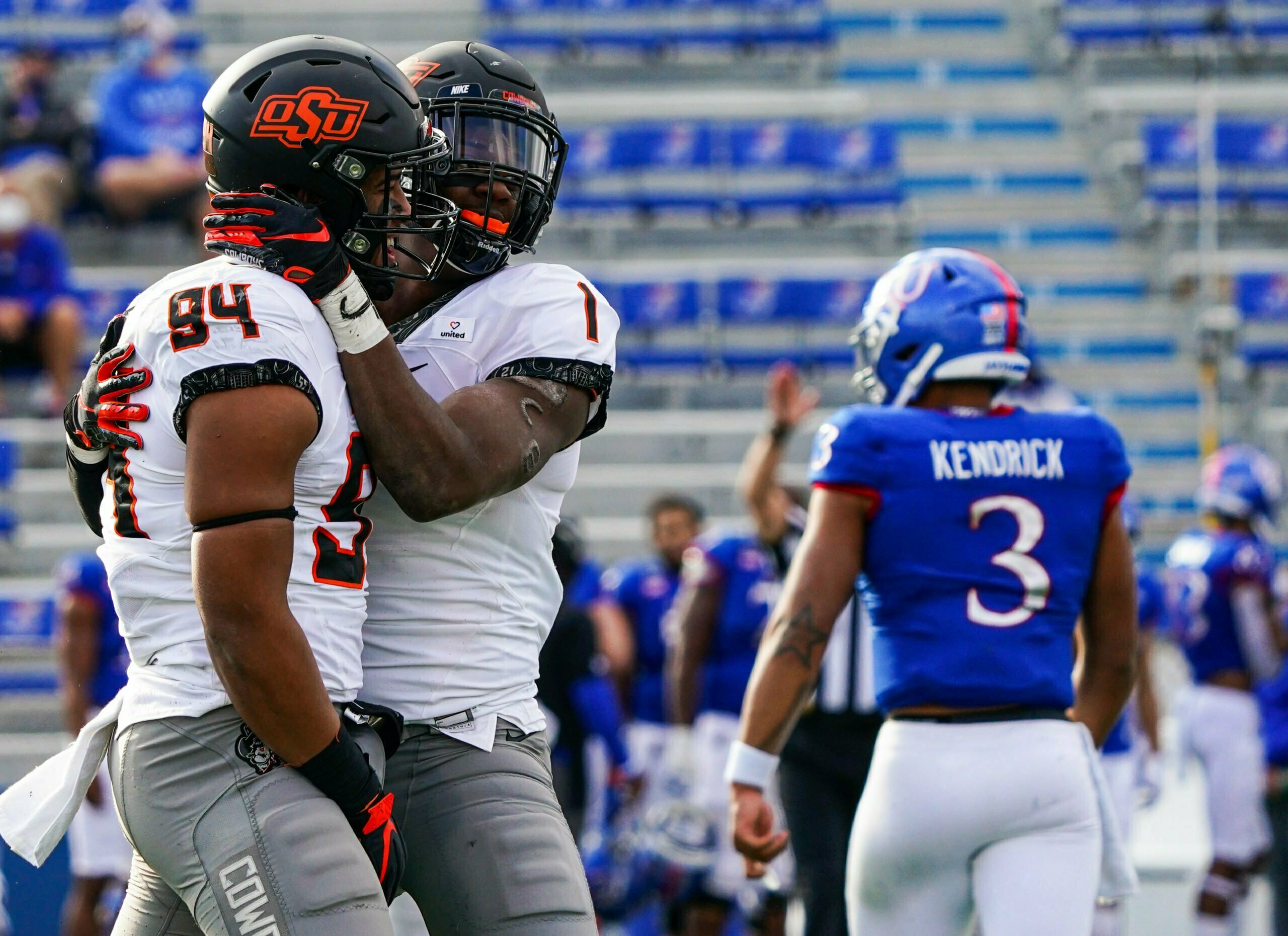 Since there wasn’t an Oklahoma State game this past weekend, I thought for this week’s film review I would go back to the KU game and talk about the superb play of the Cowboy defense. If you missed my breakdown on the OSU offense in this matchup, you can find it here.

For this post, I’m going to focus on the first three quarters, as OSU defense coordinator Jim Knowles primarily went with backups in the fourth. Here are how those 11 drives went for Kansas:

In addition, the Jayhawks were 0-for-11 on third down through those drives.

Now, KU ranks at or near the bottom of the Big 12 in almost every offensive statistic, but the Jayhawks were able to put up 10 points against WVU (also had one additional touchdown on special teams) and 7 points on the Baylor defense (also had one more touchdown in garbage time), while the Pokes held them to 0.

From a scheme stand point, as we have seen Knowles do throughout this season, the Pokes showed a lot of different looks up front.

Here, OSU goes with only three down linemen with no additional rushers lined up on the edges.

We saw three down defensive linemen with the Leo (defensive end/linebacker hybrid) lined up as an edge rusher to one side.

The Cowboys would also add another edge rusher on the opposite side of the Leo.

Additionally, Knowles would go with only one down defensive lineman with a stand up defensive end on either side of him. Also, in this image you’ll see talented pass rushers Trace Ford and Calvin Bundage lined up next to each other.

The Cowboys showed a similar look to the one above, but moved Ford as the Leo into different spots, as you’ll see in the following image.

In addition, they went with one down defensive lineman, the Leo and three linebackers up near the line of scrimmage.

And, on a KU fourth-down play, we saw the Pokes line up with four down defensive linemen.

Knowles can do so many things with all of these different formations, and it causes nightmares for opposing offensive coordinators. I really like how he’s been mixing it up. I think he’s done a good job of using a variety of looks without getting too out of control or straying too far from what is working in that particular game.

Taking a look at the defensive backfield, the Cowboys primarily looked to be in Cover 3 and Cover 1, along with some Tampa 2 and Cover 0 mixed in. For a refresher, Cover 3 is a three-deep, four under zone in which the Cowboys use multiple variations, such as “Buzz” and “Cloud.” See the image below for a base Cover 3 scheme.

Cover 1 is simply man-to-man coverage from everyone except the deep safety, who is helping over the top. The following diagram gives an example.

InsideTexas.com’s Ian Boyd does a great job of describing Tampa 2 in the this article, and the video below shows the Cowboys utilizing this defense a season ago.

Also, one interesting note, as the Tape Doesn’t Lie podcast guys mentioned earlier this year, we haven’t see the Cowboys in as much Quarters coverage, or a four-deep/three-under zone, this year as we did in the prior two seasons under Knowles.

If I’m able to get some All-22 film, which shows everyone on the field, I will try to do a deep dive into these different coverages later on.

Now that we’ve hit on the schemes and the statistics from this game, I wanted to get into a few key takeaways. First, the Cowboy defensive line and linebackers were excellent in this one. They held the Jayhawk rushing attack to just 1.2 yards per carry through the first three quarters and recorded two sacks.

The Kansas offensive line just wasn’t able to handle when the Cowboy defense brought five or more pass rushers. For example, this sack in the first quarter on third down.

As you’ll see in the image below, the Cowboys occupied five KU blockers with just three defenders. This is never a good sign for the offense.

When the Jayhawks tried to run the ball inside, the Pokes weren’t letting them go anywhere. OSU was stuffing KU in their early down running game, as you’ll see in the following video.

And, on third down short yardage situations.

Kansas was just unable to get any upfield push, as you’ll notice in both videos above.

Now, when KU did try to stretch their running game to the perimeter, or when they completed a pass to the outside, the OSU defenders did a great job of making tackles in the open field. And, it wasn’t one specific group on this defense, linebackers, linemen and defensive backs were all doing a stellar job of bringing ball carriers down on initial contact.

Next, cornerback Christian Holmes prevents any further yardage on this tackle after the Kansas quick route completion.

Lastly, safety Kolby Harvell-Peel gets in on the action with the open field tackle shown below.

The Oklahoma State defense has tackled well all year, but it put on an absolute clinic in this one. If the Cowboys can continue to limit yards after contact, it will be huge for this team as they move throughout the remainder of the season.

With the Cowboys playing a decent amount of Cover 3-zone variations this season, they have been able to really take away passes in the short/intermediate middle of the field area. Of the 12 completions from KU quarterback’s Jalon Daniels and Miles Kendrick during the first three quarters of this game, I only counted one of them in the middle of the field.

However, most of the other 11 completions were short routes to the flat or screens. The Cowboys did a great job of not getting beat down the sideline as well, as you’ll see cornerback Jarrick Bernard-Converse with solid coverage in the clip below.

And, here you’ll see linebacker Devin Harper with an interception on a throw to the sideline.

If the Cowboys can continue to cover well when isolated in one-on-one coverage deep down the sideline, they are going to have great success in terms of passing defense. They have enough capable athletes who can handle their responsibility of dropping into the short/intermediate middle of the field areas, so if the outside coverage holds up, this is going to be an all-time great year in terms of OSU defenses.

The Cowboy defense has been great so far this season. It may not be against the best competition in the country, but it’s still impressive nonetheless. OSU faces up against an Iowa State offense, a team that has played much better than the KU offense has this season, especially in the running game. I’m excited to see how the Pokes matchup in this one, and I expect them to have another good performance on that side of ball.