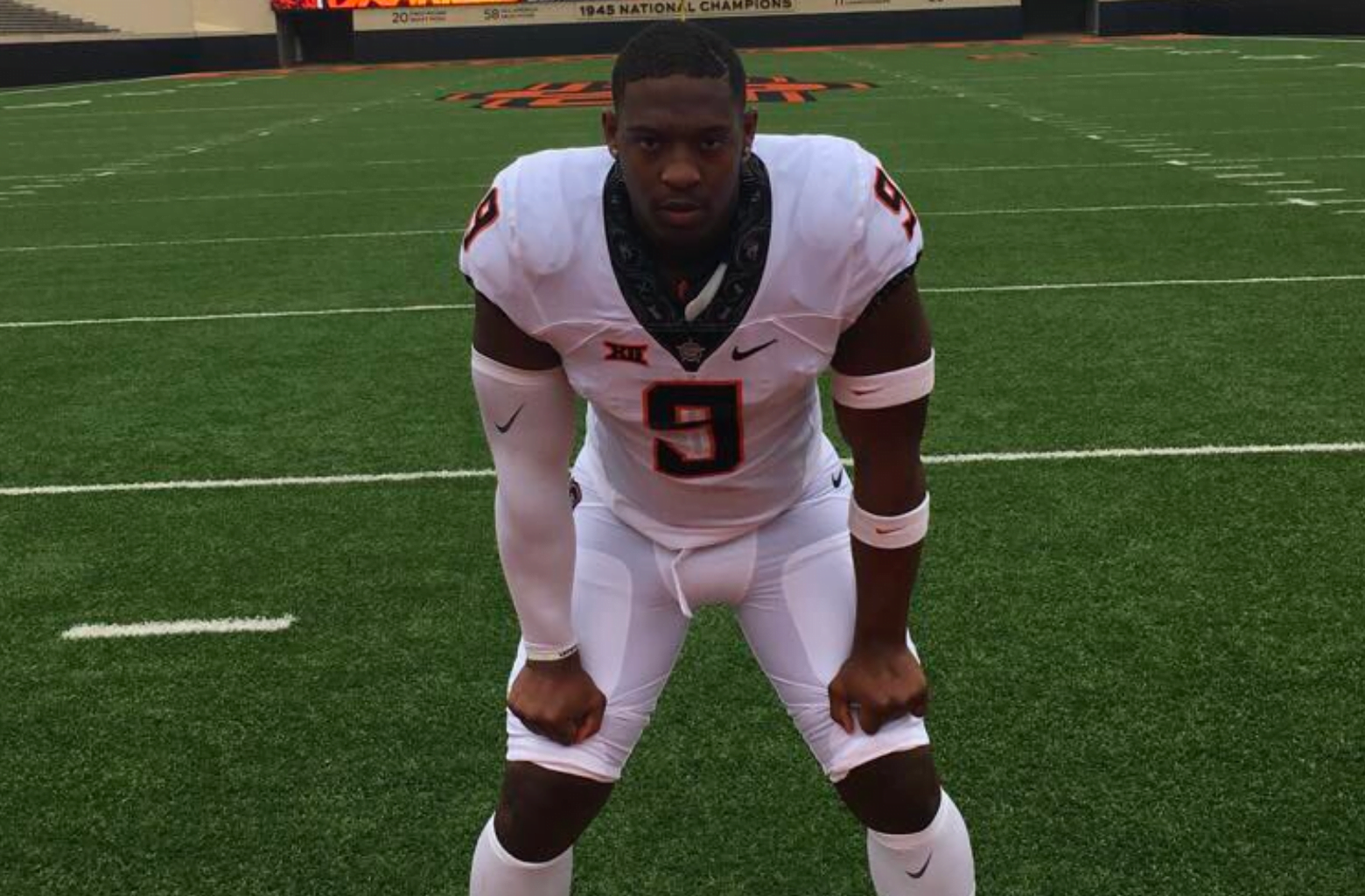 Mike Boynton and the Oklahoma State staff had their hands full with recruits this weekend as the Cowboys played host to Kansas on the hardwood, but the other millionaire Mike, the one with a mullet who allegedly can bench 225 eight times, arguably had his hands more full.

Gundy and his staff hosted a semi-exclusive VIP day for some of the top recruiting targets on their board this weekend, and among the many who were on campus included five-star class of 2021 linebacker Kendrick Blackshire, four-star class of 2021 OL commit Eli Russ and a whole lot more.

Kendrick Blackshire, 2021 LB: Blackshire already holds an OSU offer along with offers from OU, Alabama, Baylor, LSU and a slew of others. But getting him on campus is a huge deal. He and OSU DC Jim Knowles appeared to have a good time connecting.

Eli Russ, 2020 OL commit: Russ made the trip from Ardmore to meet his future OL coach, Charlie Dickey, for the first time. He’s the highest-ranked commitment in OSU’s three-commitment class of 2020. As for what he thought about Josh Henson’s departure?

Ken Seals, 2020 QB: A three-star QB prospect from Weatherford, Texas, Seals is an interesting prospect to watch for OSU as it continues to hunt out a QB for 2020. He doesn’t hold an OSU offer, but Vandy, Boston College, Kansas and a dozen others have offered. Been on OSU’s radar for several years.

Bryson Green, 2021 WR: Green is a 6-1, 175 pounds prospect from Allen, Texas. He picked up an OSU offer on his visit, adding to a collection of offers that includes Auburn, Texas, Baylor and Nebraska.

Truly an honor to visit Oklahoma State and blessed to say I have received an offer @kasey_dunn @CoachGundy ! pic.twitter.com/zH44flwybO

Blaine Green, 2021 WR: Green also picked up an offer from OSU this weekend, another OSU effort to land brothers. (Bryson and he are in the same classification, and share the same birthday; yes, they’re twins.) Blaine also attends Allen, also comes in at 6-1, 175, and has an almost identical offer sheet as Bryson.

Blessed to receive an offer from the University of Oklahoma State #GoPokes pic.twitter.com/MaSVn4wr6U

Jaylan Ford, 2020 LB: No offer yet, but perhaps a contingency plan for the OSU staff at LB? Ford is a 2020 recruit from Lone Star, Texas, whose already got offers from Toledo, Tulsa and Texas Southern. 6-1, 200 pound prospect.

Jay Wilkerson, 2020 WR: A rising receiver from Midlothian, Wilkerson made the trip to OSU and caught up with 2019 WR signee Langston Anderson. He doesn’t yet hold an OSU offer, but one could be coming. Texas Tech, Kansas, SMU, Illinois have all offered.

Kendal Daniels, 2021 S: One of the best prospects in the entire 2021 class, Daniels is a safety from Beggs whom OSU offered this past month.

Elijah Wright, 2020 S: Wright is a 2020 safety from Vian, Okla. who has offers from Army, Dartmouth and Eastern Michigan.

Trent Pullen, 2020 OL; Pullen is a new OSU target, having been offered this past month, but a long-time target for new OL coach Charlie Dickey.

Thank you for having me stilly ??#WrightWay pic.twitter.com/n5UsLkiLoM