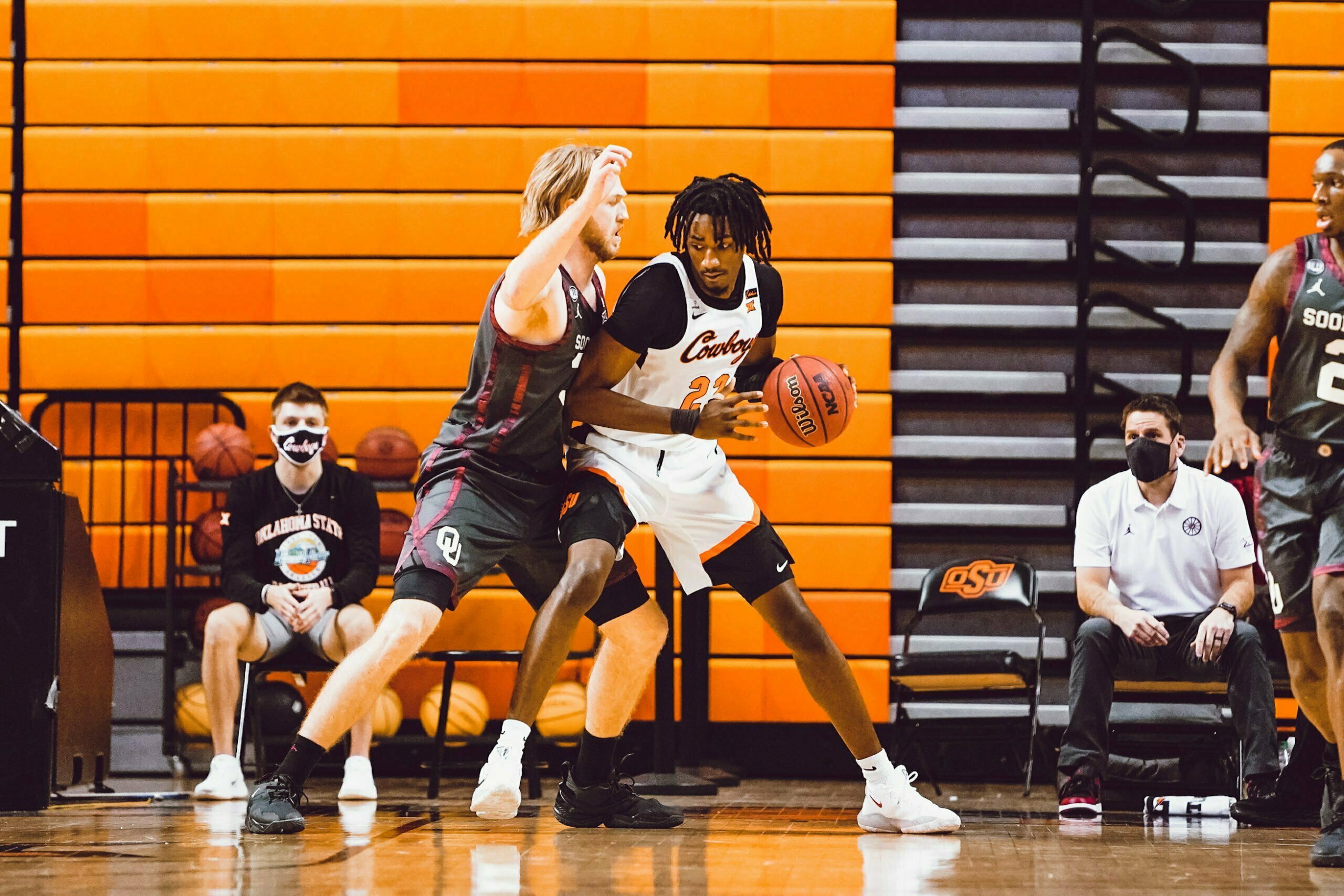 Get out your brooms, the Cowboys sure did.

Oklahoma State players danced at center court with a broom after the Cowboys beat Oklahoma 79-75 on Monday in Gallagher-Iba Arena. The win made it five in a row for the Pokes and secured a season sweep of their archrival. Here are five thoughts on OSU’s 17th win of the year.

Three Cowboys not named Cade Cunningham finished Monday’s game in double figures. After scoring just six points on Saturday, Kalib Boone led the Cowboys with 17 on Monday, and he did so on 8-for-9 shooting. He also had nine rebounds.

Bryce Williams isn’t going to be a fan-favorite among the OU faithful if he returns for an extra season. After putting up 15 on the Sooners on Saturday, he added another 14 on Monday. He also did an admirable job against Austin Reaves, a matchup we’ll get to.

Mike Boynton talked up his seniors on a microphone after the game, and the OSU student section started chanting “one more year” at Williams. Williams has mentioned his distain for academia, but he says it’s a decision he is still pondering.

“I just haven’t made up my mind yet,” Williams said. “It’d be great to come back, but I still dislike school a lot. I’ll probably make up my mind during March Madness or maybe after.”

Then there was Avery Anderson who scored 11 points. It was his 11th game this season in double figures.

The Cowboys have a maestro in Cunningham, but the group is much more than a one-man band.

“Every player does a part,” Williams said. “Don’t look off any player. All of us always help. I know Cade’s the main man, but he has a lot of soldiers behind him.”

As any good coach would do, Lon Kruger made an adjustment against a guy who dropped 40 points on him two nights earlier.

In Saturday’s matchup, Cunningham got a lot of one-on-one work against Elijah Harkless. In Monday’s game, Cunningham got doubled off pick-and-rolls and fully collapsed on when he started going to the rim.

Cunningham still ended with 15 points after having just two points and three turnovers in the first half.

In the second half, Cunningham went to the rim no matter the amount of Sooners dive-bombing him. That, paired with some late intentional fouls, saw Cunningham shoot 10 fouls shots of which he made nine.

It wasn’t national media frenzy game that his 40-point outburst was, but 55 points on a team in two games isn’t too shabby. He also finished Monday’s game with seven rebounds and four assists.

“The beauty of Cade is he doesn’t make it about himself,” Boynton said. “He makes the right play. When he’s double-teamed on ball screens, he’ll give it up and allow somebody else to go create offense.”

Saturday was about Cade Cunningham vs. Elijah Harkless, but Monday was about Bryce Williams vs. Austin Reaves.

Williams went to Boynton on Sunday and asked if he could guard Reaves, Boynton said. Williams and Reaves had some verbal spats Saturday, and Monday the pair were going at it.

Reaves entered halftime with seven points on 1-for-6 shooting, meaning most of those points came at the foul line. Reaves is an expert at drawing the foul. He drew a game-high seven fouls Monday and scored six of his 19 points at the stripe.

Williams picked up his third foul early in the second half and was taken off Reaves until crunch time.

Reaves scored just three points in the final eight minutes, with the and-one he had being what Mike Boynton said resembled a shot someone would attempt in horse.

“Last game, we were kinda chit-chatting a lot, going back and forth, so it really just carried over to this game,” Williams said. “… I just want to take on the challenge and accept the challenge and try to guard him 94 feet. Just make everything tough on him, make catches, make drives, shots everything tough. He’s a smart player. He knows how to get fouled. He’s smart.”

Oklahomans combined to score 50 points in the second rendition of Bedlam this season.

Brady “Cowboy Killer” Manek has been in a slump, but he woke up to try to drill OSU one last time. Manek finished with 20 points, and he hit a quartet of 3s.

In nine Bedlam games, Manek has averaged 15 points a game against the Cowboys.

Meanwhile in orange and black, Kalib Boone put up his 17 with Keylan Boone adding seven and Rondel Walker putting up six.

Keylan Boone was part of what was essentially a five-guard lineup to defend against all of the Sooners’ dribble handoffs. He finished a game-best plus-9 in 23 minutes after playing just five minutes Saturday.

Walker’s point total wasn’t as good as it was Saturday, but Walker scrapped to six rebounds. At one point late, a rebound hit the ground and Walker and Manek were the first two to Eddie Sutton Court. It ended up being a jump ball.

After the final buzzer, Chris Harris brought a broom to center court.

For the first time since the 2016-17 season, the Cowboys swept the Sooners in the Bedlam series. The team danced around the broom, doing dance moves that I would not look nearly as cool doing.

It’s the kind of stuff that makes rivalries fun. It feels like with Mike Boynton saying “We don’t like them” and OSU’s entire roster dancing around a broom, it’s only going to add to the passion each set of fans bring to Bedlam basketball.

The next time OU beats OSU, the Sooner faithful are going to go all at that broom dance or Boynton saying he needs to get out of Norman.

And for OSU, a school that’s been beaten and battered in the football Bedlam series, every chance it gets the fanbase will take to dance on OU.

What a fun two games in three days.