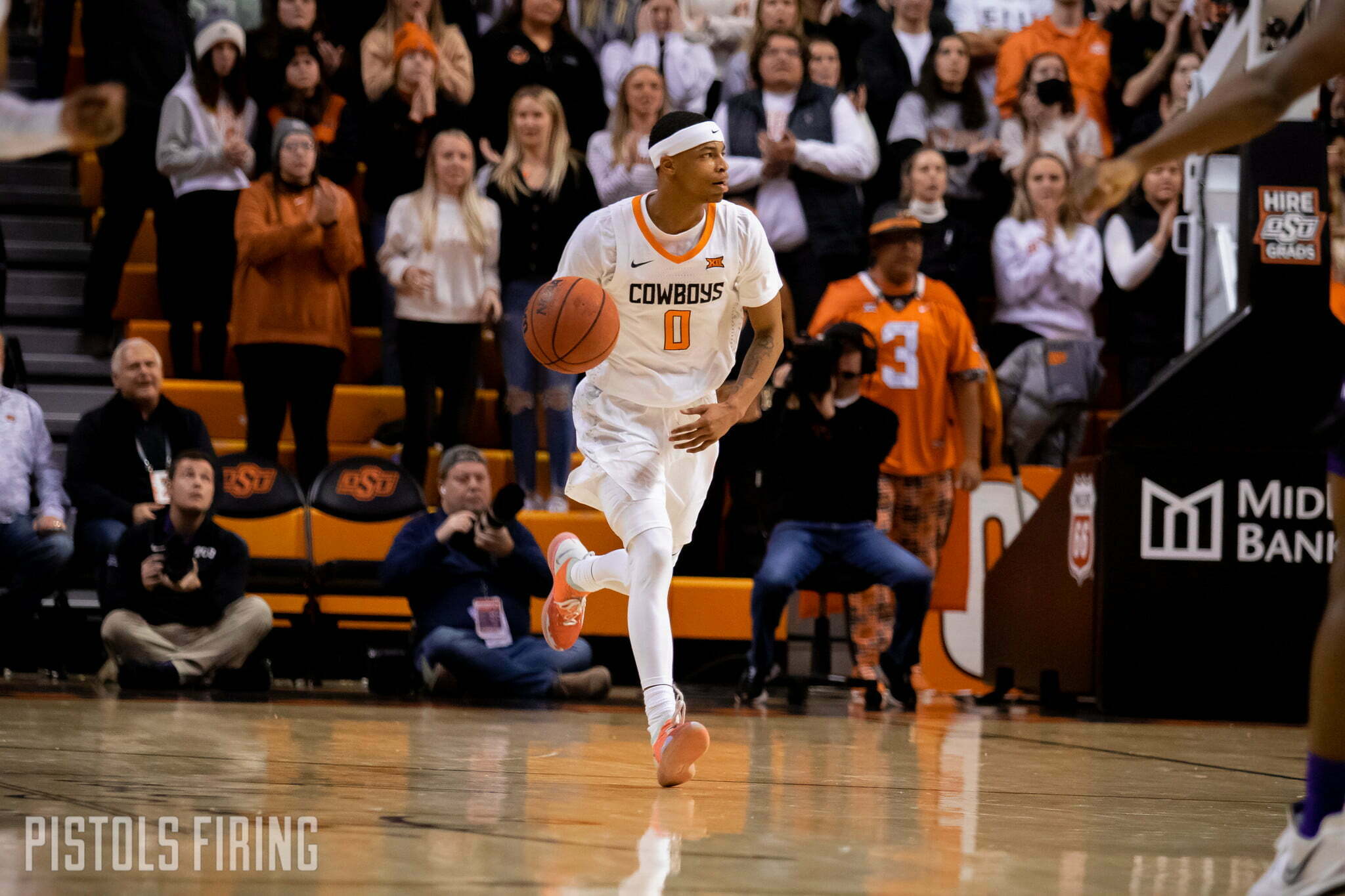 After a streaky first half offensively, the Cowboys needed a tip-in at the buzzer to take a two-possession lead into halftime. Then, mostly without their leading scorer, the Pokes steamrolled the Mountaineers to take a 20-point lead six minutes into the second half and they never looked back.

1. Bryce Williams Does it All

The Cowboys are 1-5 without Bryce Williams this season, and the second half against West Virginia was a microcosm of just how important he is to OSU.

Ninety seconds out of intermission, OSU’s leading scorer Avery Anderson picked up fouls No. 2 and 3 and headed to the bench with the Cowboys up eight. The writing was on the wall for your classic, grind-it-out finish that kept you hypertensive to the end. Then Bryce Williams wrote his own narrative.

Four and half minutes after he subbed in, the Cowboys were up 20. At one point during that stretch, Williams assisted on two straight buckets, had a hockey assist on another and then laid in consecutive tough shots himself. That two minutes of play alone could serve as a pretty good highlight reel.

When the Cowboys lost in Morgantown, West Virginia forward Gabe Osabuohien did some damage in the paint, scoring 12 points on seven shots and grabbing eight rebounds to Moussa Cisse’s seven points and four boards. The table was turned in Stillwater and then Cisse dunked on it.

Cisse turned in an 18-10 double-double, scoring a career high and adding to his streak of three-plus alley-oop games. Osabuohien, on the other hand, scored one point and went 0-for-3 from the field.

With the game all but over Osabuohien hit the deck to try to steal the ball from Cisse and an official got in his way. He vented his frustration to the ref, apparently in an unprofessional manner, earning himself a technical, the walk of shame and an earful from Bob Huggins.

The Cowboys tied their Big 12 scoring high on the season, and they did under the basket. Led by Cisse’s 10 rebounds, OSU doubled up WVU on the glass 48-24 and owned the offensive boards 14-8. That led to a 15-6 advantage in second-chance points and lopsided 40-16 edge in paint scoring. The Cowboys were just 3-of-13 on 3-pointers but had 24 layups and 12 dunks.

Including his 31-point outing in Morgantown last year, No. 0 came into Saturday’s matchup averaging 19 points per game in the last three meetings with WVU. And from the opening tip, he looked like he might go for 30 again.

As mentioned, Anderson got into foul trouble early in the second and had to sit for over six minutes. But when he returned, he helped keep the Mountaineers at bay and didn’t pick up another foul. He finished sharing the game-lead in scoring with Cisse of 18.

5. The Cowboys Locked the Mountaineers Down

West Virginia came in having just broken a seven-game skid last week in Iowa State and in serious need of a win to set up a last-ditched push for a Tournament bid. But it was the team with no postseason to play for that showed the most urgency.

The Cowboys held the WVU to 1-of-19 from the field over an 11-minute stretch that started toward the end of the first half and ended with OSU taking control of the game for good. The Mountaineers shot 32 percent on Saturday from the field and 26 percent from 3.

The Cowboys haven’t always been perfect on defense late in games, but they have the length to bother the heck out of you and the bodies to keep coming. But none of that matters without effort and, given the situation that they’re in, it’s been pretty dang impressive to watch this team’s fight.