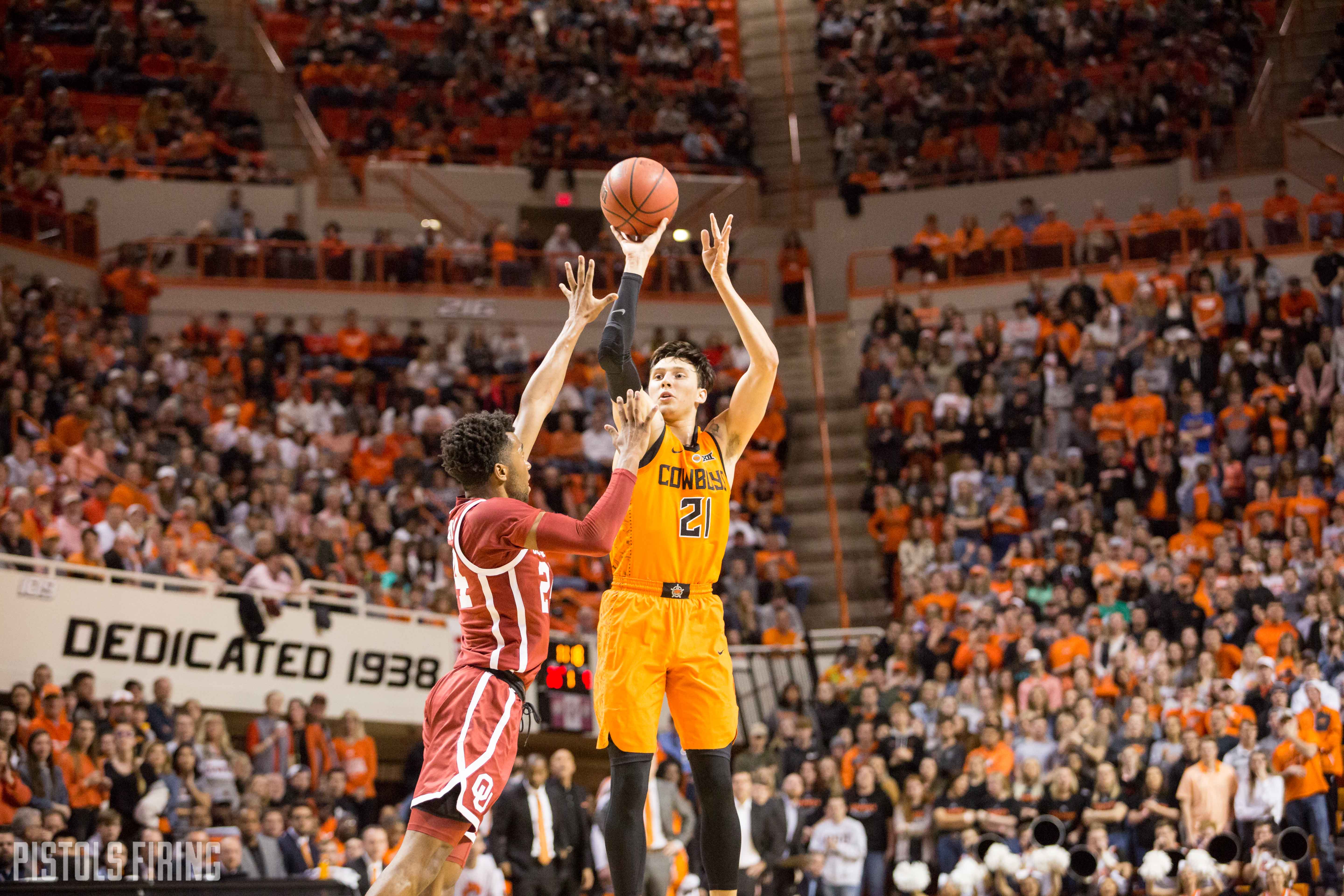 The Cowboys didn’t trail for the first 31:55 of regulation, but it was a dogfight long before then. In spite of a career night from Lindy Waters (20 points on 7-of-13 shooting) the Cowboys early scoring dried up and the Sooners earned a 70-61 win inside Gallagher-Iba Arena.

OSU ran out to an early lead fueled by a barrage of made 3-pointers by Waters. The former high school teammate of Trae Young (in case you weren’t aware!) was OSU’s offense from the tip. Waters scored 8 of the Cowboys’ first 11 points and made all five of his shots to start including three from beyond the arc. The Cowboys got out to an early 17-5 lead, then 22-7. The Pokes started 6-of-8 from deep.

But that barrage turned into a mirage as the red-hot Cowboys cooled midway through the first half allowing the Sooners to climb back into it. OSU went on scoring droughts of over five minutes and four minutes in the first, making just 3 of its last 13 shots from the field to end the half, while OU went on an 11-0 run hitting 5 of 6 during that time to pull within 3 at 34-31. A Curtis Jones 3-pointer slowed the hemorrhage and pushed the once 19-point lead to 6 heading into the break.

The finesse of the first half was followed by a brawl in the second. The volume perimeter shots gave way to a tightly contested scrapper. OU shot 64 percent from the field in the final period and outscored OSU 39-24. The Cowboys ended the game on another scoring drought, this time of 5:35, missing its final eight shots as the Sooners went 2-0 against the Pokes.

With three minutes remaining a loose basketball shot out of a scrum in the paint and rolled right to freshman guard Jamal (The Enemy) Bieniemy who lined up a wide-open 3-point dagger to give the Sooners their biggest lead so far 66-61. That was it. That early deep well dried up. The Cowboys, shorthanded, outgunned and wheezing, didn’t make another field goal.

Stat You Should Know

My key to the game for the Cowboys was to shoot at least 35 percent from 3 and to outrebound the Sooners. Genius! OSU shot 44 percent from 3 and won the battle of the boards 31-28. Boynton’s squad is now 6-2 this season when that happens.

What’s next: The Cowboys host Boynton’s alma mater South Carolina on Saturday at 1 p.m. as part of the Big 12/SEC Challenge.