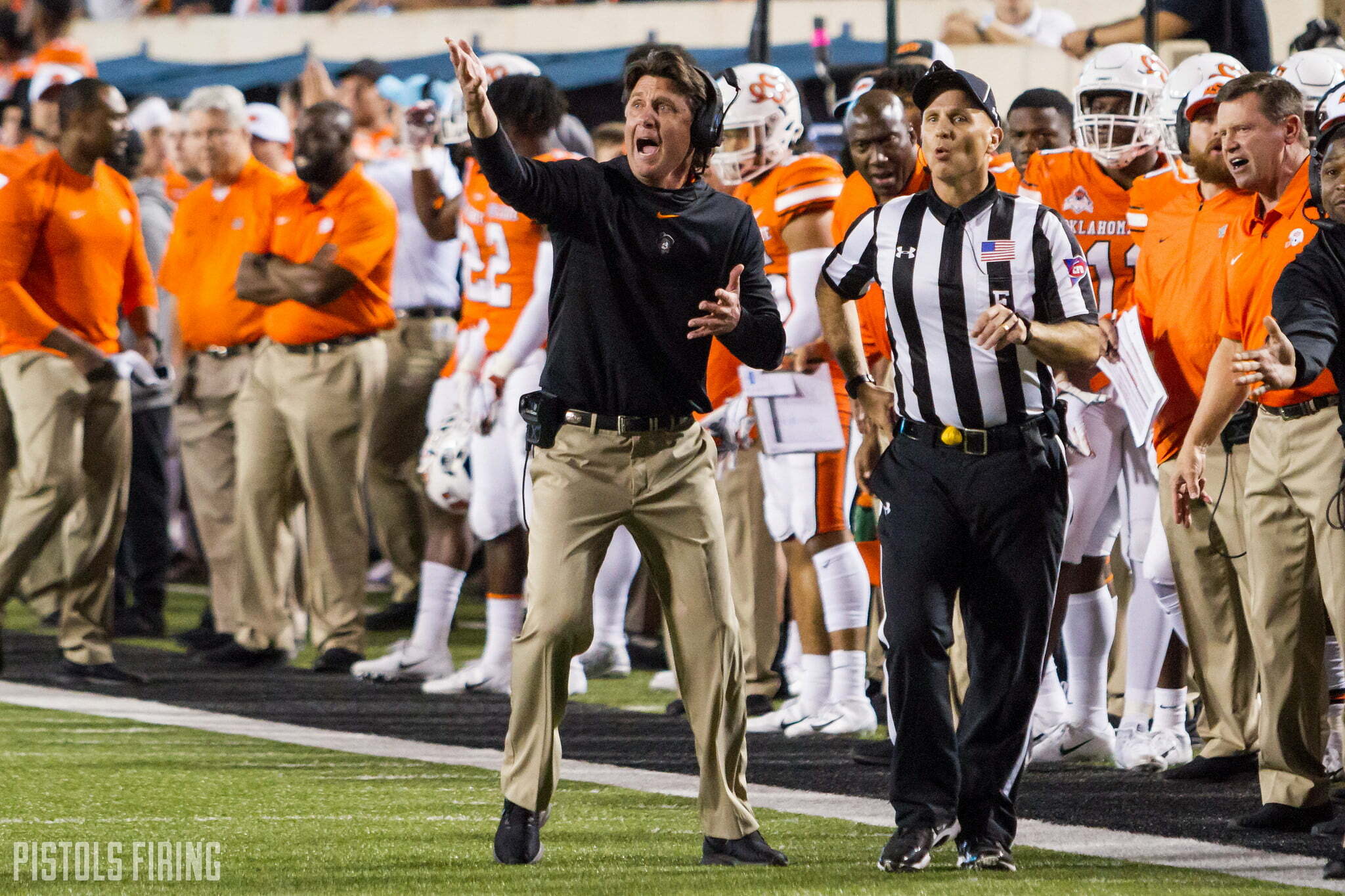 Mike Gundy met with ESPN’s Marty Smith last week for an extensive interview to talk about conference realignment, OU and Texas leaving the Big 12 for the SEC, and TV’s role in the future of college football. The full interview published Monday morning on Smith’s podcast, “Marty Smith’s America The Podcast.” Below are the highlights of their conversation.

On OU and Texas leaving the Big 12: “I think like everybody else [my reaction] was surprise. I’m just thankful that we have great leadership. Dr. Shrum and Chad Weiberg, I have complete faith in them as well as the other presidents and ADs in this league. Everybody needs to get together and come up with a really good, solid plan I think. Oklahoma State, I think we’re in great shape. I mean, look at our track record. We’re top 10 in the country in wins over the last decade. We have 15 winning seasons in a row, 15 bowls in a row. Tremendous success. In the end it’s all about ‘Are you successful in football and can you sell television money?’ And I think that’s what it comes down to. I think we’re in great shape.”

What it means for OSU football: “I wish I knew. I think anybody that says they really know the future is maybe stepping out of line. That could be maybe even the highest up at this point. The goal from what I hear is that this league stays intact through 2024. And, at that point, we all know there could be teams looking to go somewhere else. I’m not going to get involved in that because I think business is business. … I know that Oklahoma State has had tremendous success and when you look at where we’ve been from a viewer’s standpoint, over a long period of time, people like watching Oklahoma State football. There’s continuity here. Not to pump up my own tires, but I’m 17 years here. We’re stable, we’re a good product and I think we’re very marketable.”

On the Big 12’s future: “I wish I knew. You hear people talk about ultimately there’s going to be a “Power Four.” In my opinion if I was in meetings or behind closed doors, would I say that’s a probability? I’d say yes. Somebody else might make that decision. Could there be teams that jump in and say we’re going to continue as a Power Five? I think that’s marketable. I think the television — ESPN — they’re going to have a big, big say in this. They’re the ones that are representing television dollars. They make those decisions. I think at some point the leaders will get together and say ‘hey look, this is what we have if this is what you’ll offer us.’ If not it might be something else. Ultimately that’s going to be who makes the decisions in my opinion.”

On Dr. Shrum calling out OU leadership: “I like people to be very upfront and be very blunt. I like to know where you stand and I want you to know where I stand. I’ve only known her for a short period of time. I’ve had long conversations with her. I like her. I think she’s tough. I think she believes in Oklahoma State. I think she’s innovative. I don’t know how far we’re going to get in life and in society today taking a backseat and sitting there and letting other people direct our traffic. You have to get out front. From what she’s shown me, she’s not scared to do that.”

On Bowlsby sending cease and desist to ESPN: “All that stuff’s way over my head. We have to trust [Bowlsby] that he’s making the best decision with his committee for us to move forward with the group. I have no idea what any of that meant. What I said is this: Between the commissioner, his group, the presidents and ADs, they have to get together and get a gameplan to say ‘this is what is best for the future, post-2024.’

On Cade going No. 1: “It’s awesome. When we play well here in football, our enrollment goes up. When Coach Sutton was here and we were going to the Final Four, our enrollment was up. People like winners. People like success. With Cade being here and being in the position he’s in, it only takes [the OSU logo] and brands us and markets us even more. I don’t know him really well, but I hear fantastic things about him as a person, that he’s humble. I watched some games of his on TV, and he plays pretty good.”