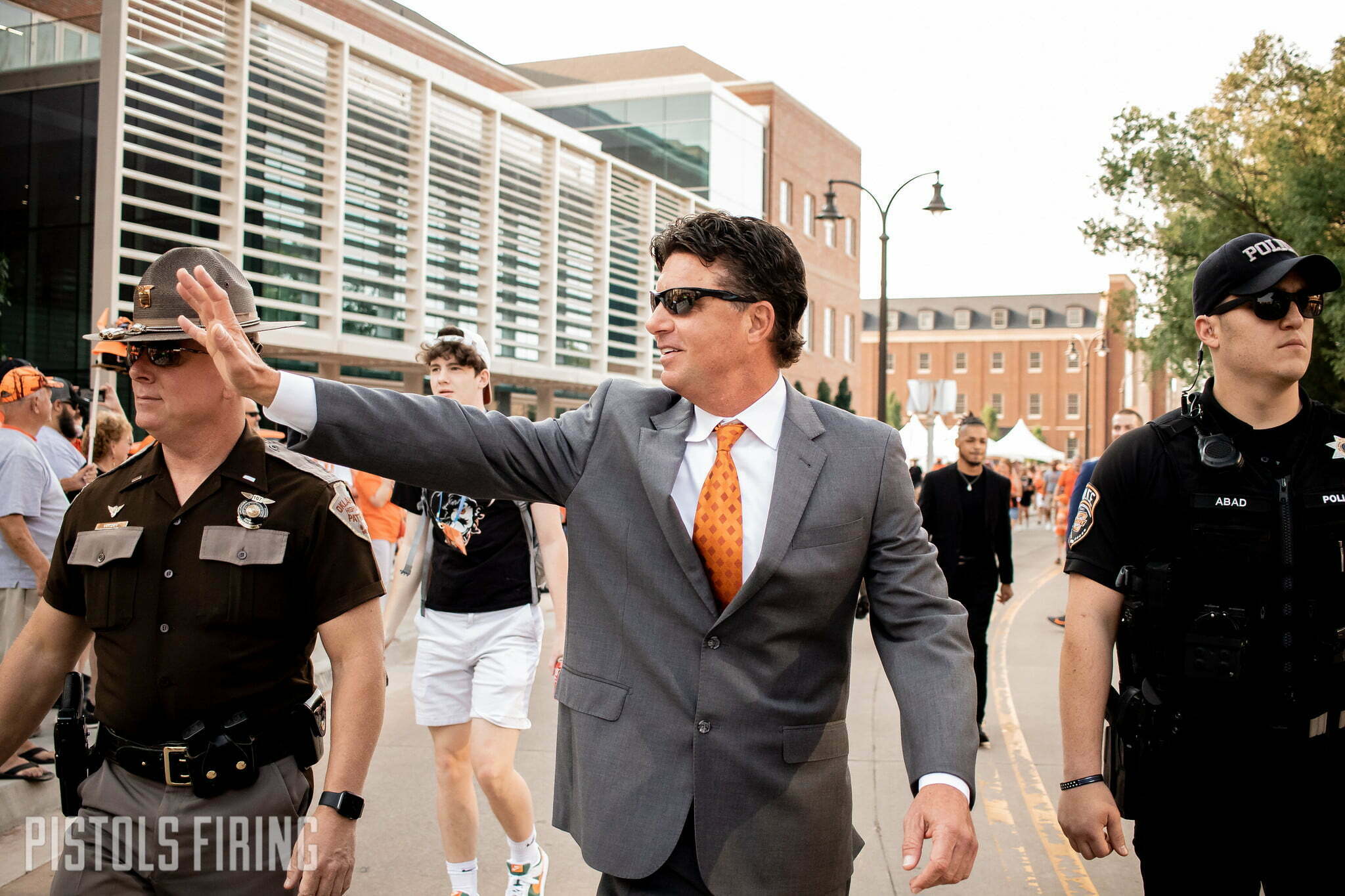 As if Saturday’s Bedlam game between No. 9 Oklahoma State and No. 13 Oklahoma doesn’t have high-enough stakes on its own, what with a berth in the Big 12 title game on the line for OU and a chance to showcase playoff mettle for OSU, Mike Gundy on Monday seemingly upped the ante.

Speaking to the media at his weekly press availability, Gundy expressed some doubt about the future of the Bedlam series and suggested that this weekend may be the last time it’s played in Stillwater.

Gundy elaborated on his thoughts of the business side further by mentioning the Big 12’s expansion back to 12 teams as one factor, the league likely moving to divisions and scheduling conflicts that could arise by scheduling further out.

“When you look at the business side of it, we play … I don’t even know what they’ll do. We’re going to 12 teams, right? So you’re going to have divisions now,” he said. “That would be, let’s think about this, six and six. Did we used to do five (division games) and three (non division games)? We’re scheduled out, you guys can help me on this, through 2032 or something. We’re scheduled out way longer than they’ll keep me around here. So, your financial commitments to buy outs and payouts are at an all-time high now. Then if we go back to playing five and crossing over, I would think that we would end up with, I bet somehow they find a way to play nine (conference) games. That’s just me. I’m just talking about television money, right? That’s what the television is paying for. So let’s just say we’re playing nine, so we have our three nonconferences scheduled. The SEC, in my opinion, from what I’ve heard, is going to go to nine also. If they have their three, then you would have to buy out and pay off teams to start with. And then secondly, you would have to be willing as a Power Five conference school that’s playing nine conference games, we all play another (Power Five school), like I think we play Arizona State next year. So that’s 10 Power Five conference games. So, if you’re going to go back into this game, you would be willing to play 11 (Power Five schools) out of a 12-game season, which would be extremely difficult.”

He continued by adding that from a business standpoint, the case to continue Bedlam would at the very least be met with some hurdles.

“And from a business standpoint, the more success and games you win in football is a huge revenue for your athletic department and your university because the more you win in football, enrollment goes up. That’s a fact. Marketing money goes up. There’s a huge amount of money involved in that,” he said. “So, if we were running a company, and you’re in a business standpoint, somebody would have to make a decision. Do you want to risk some of that in how many other teams across the country that are competing to get in the final four are willing to play 11 (Power Five) conference games and only have one nonconference, based on the amount of money that could be sitting there at the end. Whether you like it or not, I’m guessing that’s what’s gonna take place. Now, have I been in those discussions? No. That was a lot of big words for me just in a short amount of time. But that would be my guess. But I’m going to do what Dr. Shrum tells me to do, and I’m gonna do what Chad Weiberg tells me to do. Then I go on down the road.”

This is not dissimilar to what Marshall Scott wrote a few months back discussing potential conflicts that may arise if Bedlam were to continue. Whether or not the schools do want it to continue to be played might not be completely relevant; whether each school has the room on the schedule is more relevant. OSU is pretty booked up for the next decade and adding teams to the Big 12 means there is likely to be less room, not more room, to add to the schedule.

Of course, leadership could bend rules and make Bedlam happen if it wanted to make it happen. OU and OSU could agree to play an extra nonconference game against a Power Five opponent to make something work. Who would rather see OU play Tulane than play OSU? Nobody, right?

But that’d take a compromise from OU and probably from OSU, too. And with how OU’s abrupt departure went down, right now it does seem like Gundy might be right: Saturday in Stillwater might be the last time Bedlam is played inside Boone Pickens Stadium in a long, long time.