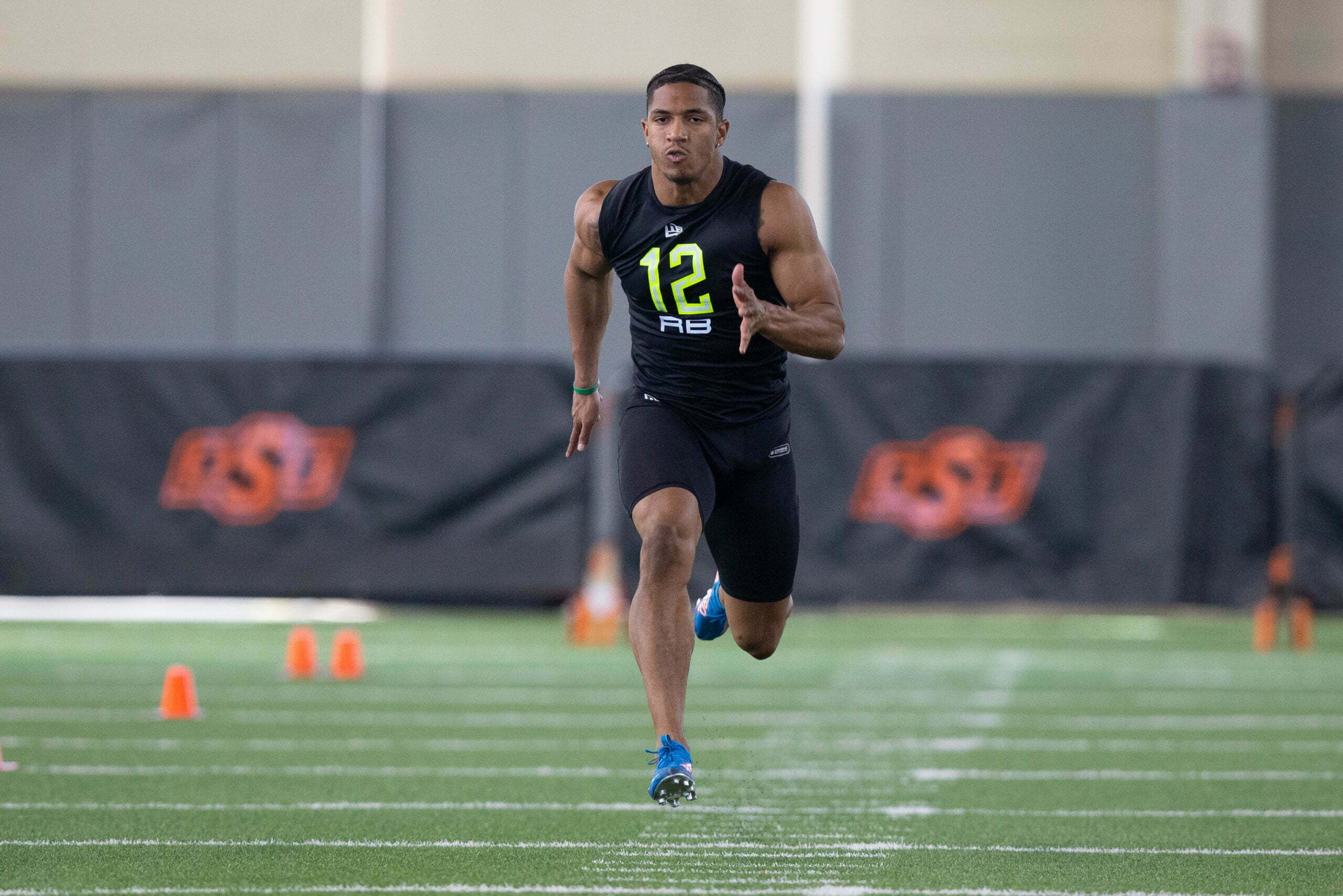 There was some good, bad and ugly news for former Cowboys in the NFL in Week 5. But let’s start on a positive note with a career game from Chuba Hubbard.

In his second week filling in for injured Panthers running back Christian McCaffrey, Chuba Hubbard built off of his strong debut.

Chuba handed in the first 100-yard game of his young career while also adding five catches for 33 yards.

Chuba has racked up 220 rushing yards and 78 receiving this season, with the bulk of his production coming over the last three weeks with McCaffrey sidelined.

There was some noise that McCaffrey would return against the Eagles, but he was held out. It’s still unclear if he will make of a go of it in Week 6, or how much of the workload he will carry once he returns, so expect Chuba to get a chance to add to those totals.

The running list of former Cowboys in the NFL is starting to look like the roster of a MASH unit. Joining the likes of Justice Hill and Teven Jenkins, another former OSU star is done for the year.

After being taken in the sixth round of the NFL Draft by New York, Williams worked his way up a crowded cornerback depth chart in the offseason to earn a spot on the active roster. He appeared in all five of the Giants’ games so far, both in special teams and taking defensive snaps the last four.

Washington’s targets and production have been up and down this season — when he’s gotten looks, he’s made catches — much like it’s been throughout his tenure in Pittsburgh. But an injury could clear the path for Washington to get more targets, and thus, more production.

Starting wideout JuJu Smith-Schuster suffered a dislocated shoulder on Sunday and will require surgery. He’s expected to be done for the year.

Washington missed last week’s game due to a groin issue but was expected, per the above-linked article, to return to practice on Tuesday. In his last appearance, in Week 4, Washington recorded a season-high four catches for 69 yards.

Former Oklahoma State DB A.J. Green stepped in for an injured Denzel Ward and played in nearly every snap of the Browns’ 47-42 loss to the Chargers on Sunday. Unfortunately, a penalty he was called for late directly led to a Chargers score, and indirectly, to a Browns loss.

The play was on 4th-and-4 in the fourth quarter with the Browns hoping to get off the field with a lead. Green was guarding Chargers receiver Mike Williams and was called for defensive pass interference.

You be the judge.

Green played 69 defensive snaps of the Browns’ 75 and turned in a career-high six total tackles and two passes defended. Coming in he had totaled just one defensive snap through four games. Green can expect more opportunities next week as Ward is listed as questionable.

The Jacksonville Jaguars appeared to be getting a steal when they scooped up last year’s surprise deep threat, but through four games Tyron Johnson has seen just three targets and recorded one catch.

But now, with DJ Clark on injured reserve, it looks like the former Cowboy wideout might also get an increased role in his respective offense.

Jacksonville head coach Urban Meyer said that last week was Johnson’s “best week of practice” and praised his physical skills but implied it was time for him to take that next step. The Jags host a struggling Miami defense on Sunday.

Ogbah Continues to Grade Well, Dolphins Do Not

Emmanuel Ogbah continues to look good by those grading individual players, but the scoreboard says otherwise for his Miami Dolphins who are now 1-4 after giving up 45 points in a blowout loss to Tom Brady and Co.

Ogbah mustered only one tackle on Sunday and didn’t get to the GOAT, and he’s totaled just 1.5 sacks through five games, far from this career-high nine last season.

But he’s still grading well and is among the NFL’s leaders’ in QB pressures thus far.

Carson Could Return Next Week

Already down quarterback Russell Wilson, the Seahawks were also without their top rusher Chris Carson due to neck condition in what was a 26-17 loss to the Rams.

The Seahawks have characterized Carson’s neck as a chronic injury that flared up anew in the preseason. Carson played through it the first four games of the season but Carroll said he was “too uncomfortable” to go against the Rams. [Seattle Times]

It sounds like there’s a chance that Carson could return next week after head coach Pete Carroll said this week that he had taken “a big turn” in his recovery.

Ammendola Nails One from 49

The former OSU kicker went 2-for-2 in field goals including a 49-yard attempt during the Jets’ 27-20 loss to the Falcons. He did, however, miss his only extra-point attempt. On the year, Ammendola is 6-for-7 on FG attempts and 3-of-4 on PATs.