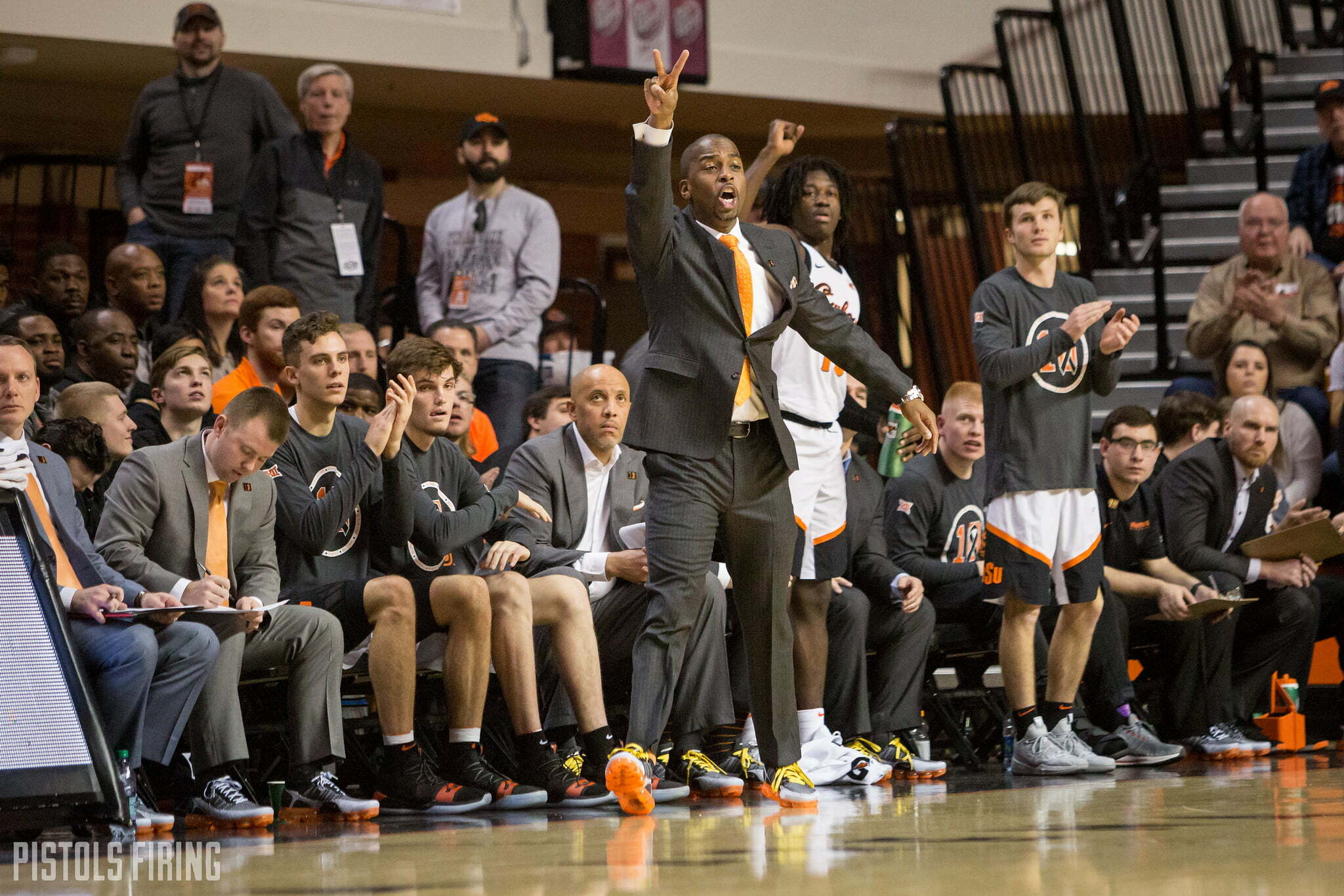 STILLWATER — Members of the Oklahoma State basketball team met with the media Thursday.

Here are some of the highlights from Boynton and Co.’s interviews.

Tanner Taylor on His Transition from Manager to Player

Tanner Taylor still has a moment of panic when Mike Boynton asks for a white board.

That feeling then fades as Taylor remembers he is a player now, and those aren’t his duties anymore. One duty Taylor has had to add since being added to the roster was the team’s workouts, something he is working through the soreness of.

There are six other newcomers practicing with the Cowboys, but none of which have been added to the roster yet. Taylor’s entrance to the squad was different in that he didn’t participate in the walk-on tryouts. As a two-year manager, Boynton knew what he needed to of Taylor.

“It was kinda mutual,” Taylor said. “He knew I had interest, and he knew what I was capable of. He knew I had good character.”

Saturday was the first time Taylor was on the bench as a player. He said the feeling was hard to explain, but he could definitely feel the energy of putting the cursive lettering of Cowboys across his chest.

Although he didn’t check in, Taylor’s parents came down to watch Saturday’s game, and Taylor said he thinks they’ll be in Gallagher-Iba Arena again Saturday when the Cowboys face Kansas State. Taylor said he FaceTimed his parents for about two hours when he told them the news that he was joining the team.

“I called them actually, FaceTimed them that night,” Taylor said. “I told them I was interested in doing it when the tryouts started, and they said,’ ‘Go for it, once in a lifetime opportunity.'”

Evans was arrested and fired as a part of Mike Boynton’s staff after Evans chose to stay in Stillwater after Brad Underwood left for Illinois.

“It’s an unfortunate situation,” Boynton said. “I still believe in my core that Lamont’s a good person caught up in a tough situation. I still continue to pray for him and his family.

“As it relates to our program, we’ve moved forward. We’ve dealt with what we’ve needed to. We’ve been as cooperative as we’ve needed to be, and we’ll see what happens next.”

Every February, Mike Boynton goes on a diet of only nuts, fruits and vegetables, and after considering not doing it this season, he has decided he’s going to do it again.

With Thursday being his last day of freedom, Jenny, Boynton’s wife, who is also a dietitian, is in charge of his last supper.

“My wife’s really good about making sure that tonight I get nice and stuffed,” Boynton said. “January 31st and March 1st are like her favorite two days on the calendar.

“I don’t have any request. Beggars can’t be choosers. I’m going into hibernation kinda for the next month, so I’ll take what I can get.”

Boynton in the Zone

Boynton was taught in the Henry Iba school of tough-nosed, man-to-man defense, but with a small bench, he has had to expand his defensive knowledge.

“I’ve studied coaches all my life and obviously grew up in the northeast,” Boynton said. “Knew (Hall of Fame coach) John Chaney, who was a big proponent of a zone, and (Syracuse coach Jim) Boeheim, I don’t know if he’s ever coached a possession of man-to-man defense in his life. Two of the greatest coaches ever.

“I certainly know that it’s an effective way to coach and have success. I just never was exposed to it myself by the coaches I’ve played for or worked for. None of them were ever really, really hard set on coaching zone. But, sometimes when you’re forced into situations you have an opportunity to learn.”

Boynton said the 1-3-1 has probably been his team’s most efficient defense since the roster trimming. He put Cameron McGriff at the top his 1-3-1 zone, a spot where coaches sometimes put a guard. McGriff made that decision pay off Saturday with two steals and a handful of deflections.

“It’s a defense that we’ve had and probably didn’t think we’d use as … We kinda started using it out of necessity,” Boynton said. “I’ve seen (McGriff) play (at the top) before, so I wasn’t surprised. I know he’s capable, and he’s got a little bit of a football background, so the type of 1-3-1 makes you have to be kind of a linebacker, safety. I knew his athletic instincts would be a good thing for us to have him up there.”