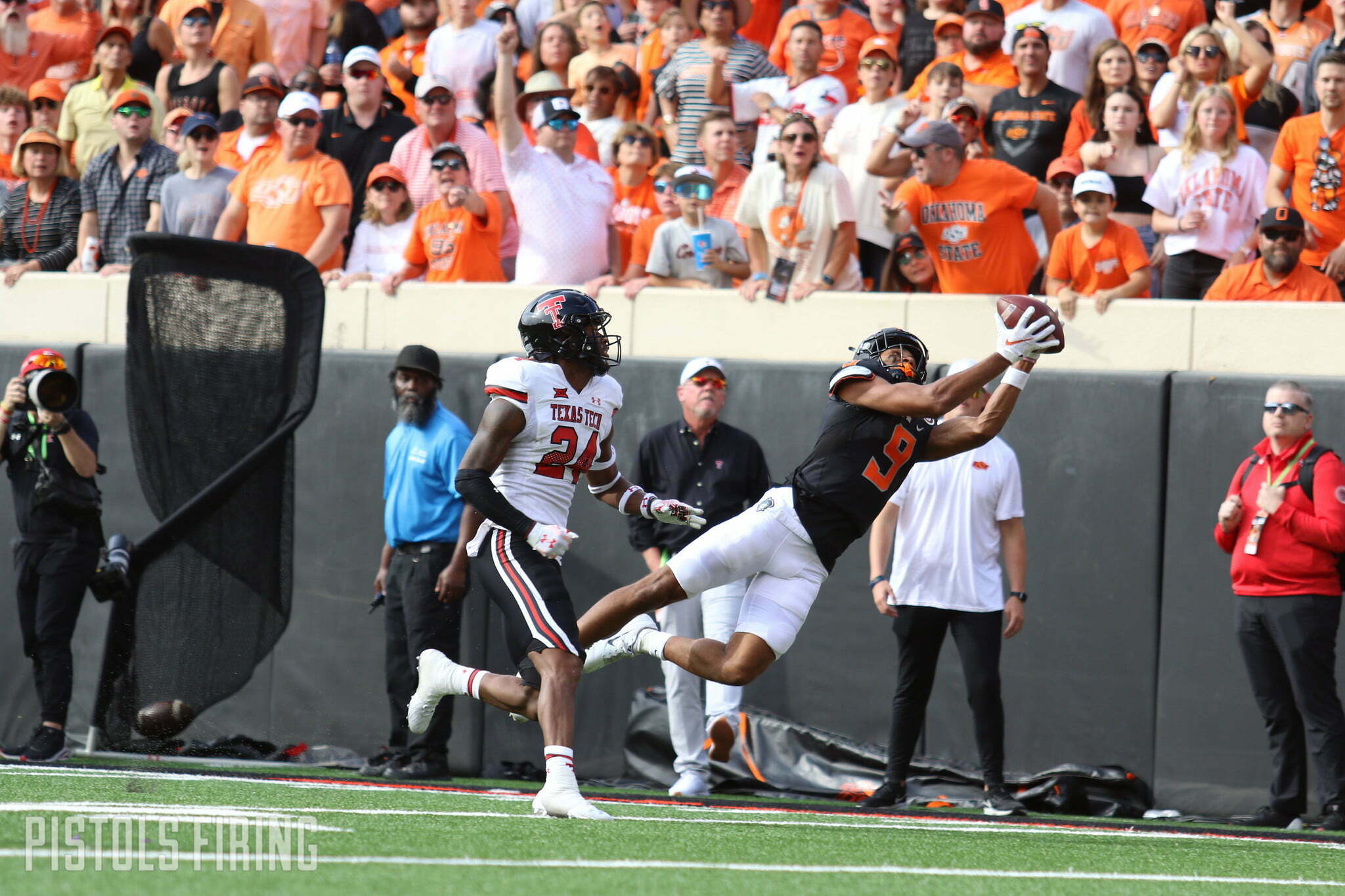 Oklahoma State receivers made so many great catches during the Cowboys’ comeback win over Texas Tech that even the refs wanted a second look at several of them.

To the officials’ credit, this was me scoping YoutTube highlights on my phone at work two days after the game.

To celebrate the big-time contributions of Spencer Sanders and OSU’s receivers, I’m going to use our regularly scheduled Superlatives time slot to focus just on those impressive pass plays.

This play should live on school-sponsored highlight reels for years to come. Don’t worry. It will never get old.

On the Cowboys’ opening drive, Sanders rolled right to draw the defense in on what looked like a designed QB run before flicking the ball 20 yards down the field to Bryson Green. And the sophomore did the rest.

Green muscled through would-be tacklers and then used another Red Raider to shield himself from the turf as he rolled toward the goal line and stretched the ball into the promised land. It was an impressive display of athleticism and body control that highlighted Green’s career day.

Another great throw by Sanders and a beautiful route and catch by Brennan Presley that the FS1 TV crew predicted before the ball was snapped.

The officials were apparently so enamored with the play that they couldn’t be bothered to stop the clock despite Presley going out of bounds. Hence the confused look on No. 80’s face after the play.

This was an especially important play because it moved the Cowboys into the red zone extending a scoring drive. Four plays later, Sanders picked up a rushing TD and Jaden Bray converted a two-point conversion to complete the comeback and tie the game at 31-all.

Another huge play by Presley earlier in the third. On this one, Sanders expertly places the ball where only his target can get it and Presley shows off those impressive hands for a big third-down conversion.

Another huge play by Green. If they weren’t afraid of fanning out too hard, the refs could have just rewatched it on the jumbotron. But I get it. An official review seems more… official.

Cowboy fans got their first look at the touted receiver as a bigger, stronger sophomore on Saturday.

After turning heads with his big-play acumen as a true freshman last season, Jaden Bray missed the first four games of 2022 with a hand injury. When he finally saw the field on Saturday, there was some obvious rust. He only hauled in two of the 10 balls thrown his way.

He collected his first catch at the Tech 5-yard line but slipped and went down for no gain. On the next play, he reeled in a ball at the back corner of the end zone but couldn’t get a foot down in bounds.

But on this play, Bray may have knocked off the most rust when he dove for a low ball from Sanders in the middle of the field. He got his arm under it and picked up 24 yards.

This catch may end up looking pedestrian compared to some of those from last season — and the many more OSU fans hope to see moving forward this year — but it makes the list if for no other reason than that it accounted for his first receiving yards of 2022 and because it should be the first of many big plays to come.