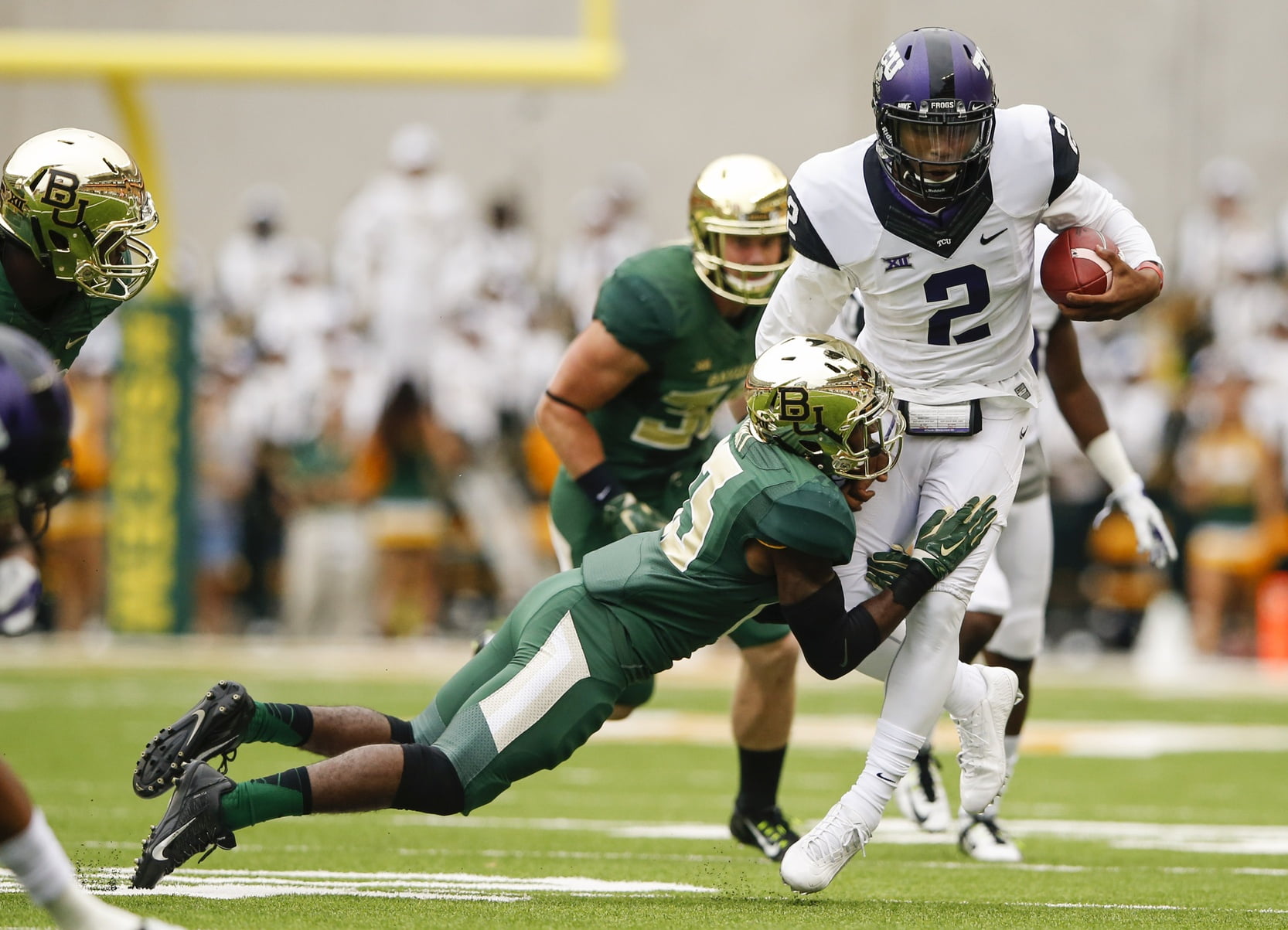 OSU should seeing a lot of this on Saturday in Ft. Worth (USATSI)

My first thought when I saw the Frogs O’ War post that Trevone Boykin was out this Saturday for TCU was “oh wow I’m going to have to change my Big 12 power rankings.”

Second thought: “that sucks for him.”

TCU coach Gary Patterson tells me there's no truth to a report that Trevone Boykin had wrist surgery Monday and will miss 4-6 weeks.

“Snap, somebody’s about to get taken to the woodshed.”

It all happened so fast. From the time Frogs O’ War first tweeted its Boykin news to the time the apology post went up only 37 minutes elapsed.

Speaking as someone who somewhat actively tries to avoid breaking news I have to say that if you’re an independent-ish site like Frogs O’ War you better have like 19 sources and photos of Boykin’s open wrist during surgery sent to you from his mom to pop something like this.

Which I’m sure they nearly did.

So one of two things happened here:

1. They were tricked (their words) on purpose by TCU which planted false information inside their athletic dept. to see if someone would leak it to Frogs O’ War.

This seems both improbable and self-indulgent.

Is TCU losing games because somebody in the athletic dept. is leaking info to a blog with 3,500 followers on Twitter? No, so you’re going to set up an elaborate plan involving the falsification of information about one of the best QBs in the country just to catch this person?

2. Frogs O’ War got catfished (I mean, Boykin IS in a soft cast so it would be a pretty easy reach). This is way more likely and as someone who — I think — has been on the receiving end of an attempted catfish (of sorts), not without motive.

Believe whatever you want about the camo uniform situation from two years ago but there’s probably at least a little truth to the notion that somebody wanted to “catch” me (or another site or publication) in the act. Whatever that means.

Which is why this from Jason Kersey needs to be discussed.

EASY KERSEY! RT @jasonkersey: Nobody is perfect, but the Boykin stuff is why you probably shouldn't count on fan blogs for breaking news.

I gave Kersey hell about this but he’s actually right. People like me shouldn’t be breaking news unless it’s handed to me on a silver platter. That’s not my groove, not what I want it to be either.

That’s why the Oklahoman exists or the Tulsa World. It’s the divergence between Adam Schefter and Grantland. A Schefty ain’t going to leave you gasping for air like Brian Phillips and vice versa.

There’s a place for everything.

The funniest part about all of this is option 3 which we didn’t discuss. That Boykin really did have surgery and IS out for Saturday and Frogs O’ War caught it going both ways.