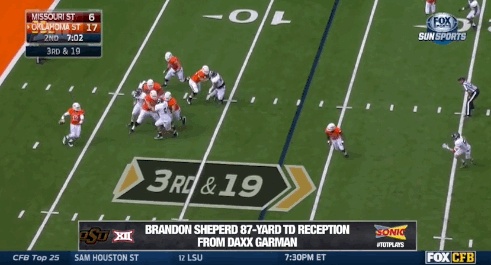 In football we get so few opportunities to watch guys perform that it becomes difficult to not overstate the banal or at least render overwrought what, in a vacuum, is not nearly as grand a performance as we make it up to be.

This throw is one example.

For months with Daxx it was that floating, spinning bomb from the indoor practice facility that we clung to like a cub clutching its first real meal out of a slippery stream.

Now it’s this — this on the run, off the wrong foot, fling to Brandon Sheperd in coverage for the second-longest passing TD in OSU history. And here it will live until my hosting plan runs out.

1. That’s 35 yards on a line off his right foot. Have you ever tried to throw off the same foot as the side your throwing arm is on? It’s impossible. If Walsh tried this it would have ended up in the “grotesque car wreck, don’t let your children watch because THIS IS NSFW” portion of the news.

2. It’s not like Sheperd was just sitting out there staring at the new turf. He was pretty well-covered in what Daxx called a “two high safety look” so to even try this throw makes me think you’ve got a set on you.

3. I mentioned this over the weekend but I wonder if we remember this throw in two years the way we remember Weeden’s smoke show throw to Blackmon against Colorado in 2009.

Odds are against it but if Daxx does take over for the next two years and OSU is anything close to those 2010/2011 teams, this will be the throw that everyone falls in love with over and over again on YouTube.