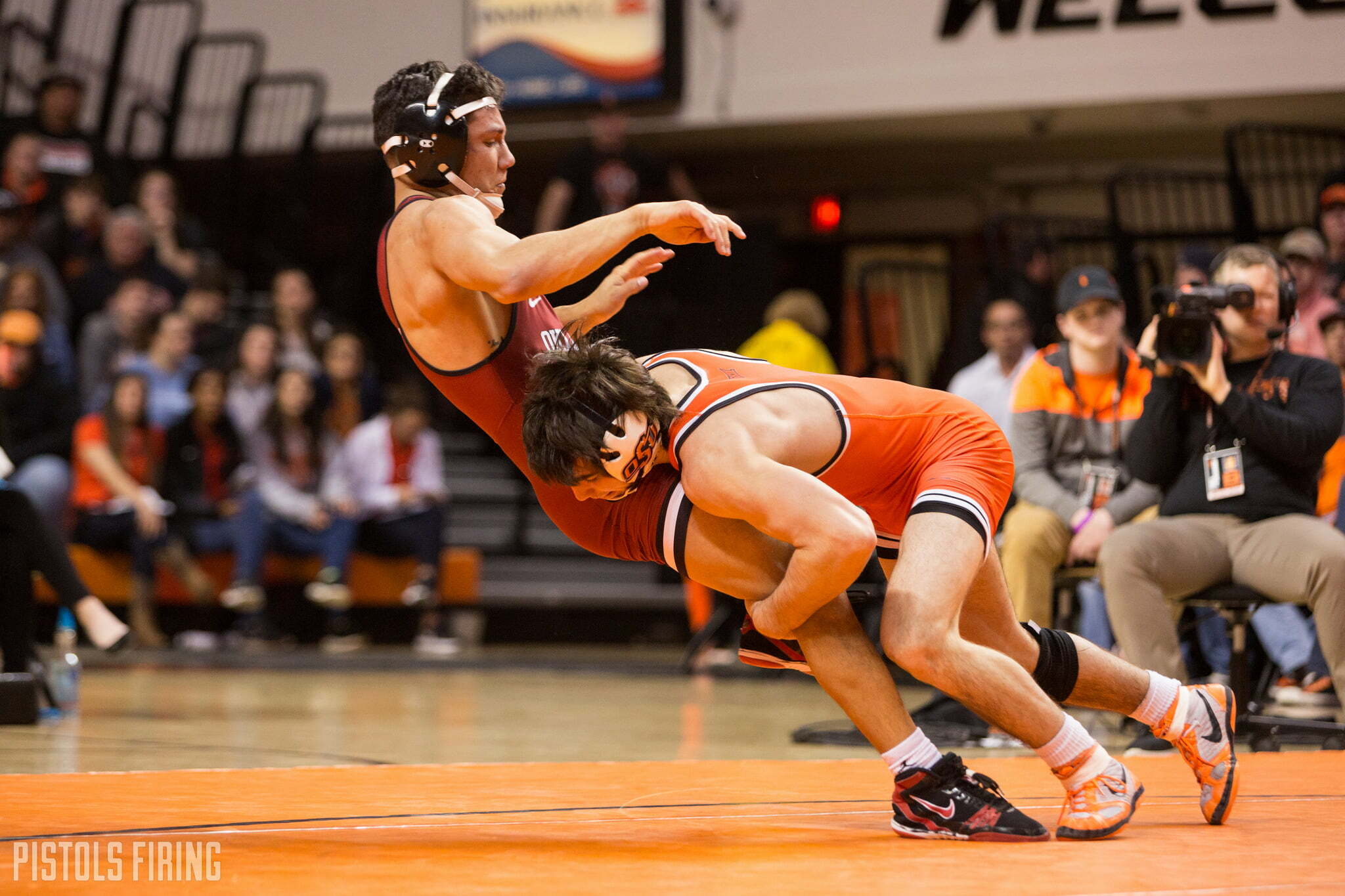 The seeds and brackets for the Big 12 Tournament in Tulsa this weekend have been released. I’m going to do a two-part breakdown for the event covering what to look for at the lower weights today and the upper weights tomorrow. Let’s take a look at 125-157.

The 125 weight class is probably the deepest group in this tournament. Nick has a good draw for this. He picked up the No. 1 seed over Utah Valley’s Taylor Lamont, who received the 2 seed. That was good for Piccininni. The bottom half of the bracket here is tougher than the top and Nick should pretty easily make the final.

If Piccininni does, his likely matchup with Lamont should be good. Lamont’s really solid. I would probably say this one is a toss up. Lamont hasn’t wrestled in about a month, though, and I don’t know what the story is there. Maybe he’s injured? Not sure. The final should be great though. If it’s not Lamont it’s likely NCAA runner up Zeke Moisey and that would be a good one too.

Brock drew the 3 seed mainly due to a loss to Montorie Bridges in the Wyoming dual where Brock went for a throw early, was put on his back, and wasn’t able to come all the way back to win. They’ll probably meet in the semifinal and I expect Brock to win comfortably.

It will likely be Brock vs. Seth Gross in the final. Gross is a great wrestler, ranked No. 1 in the country at 133. Brock can go with him, though, especially on his feet. The big question is what happens if Brock takes bottom or gets taken down? He struggles there and Gross is good on top. Should be a good match, but you have to pick Gross here. He was 2-0 against Brock last year.

Dean Heil has the 2 seed here. Most are aware Heil has dropped a few matches this year after winning the NCAA tournament two years in a row. There’s potential that he could avenge one of those losses this weekend. Bryce Meredith and Ian Parker drew the 1 and 4 seeds and both have wins over Heil this year. They’re opposite Heil in the bracket and most likely you’d expect Meredith to come out on top.

Heil’s route to the final isn’t easy. He’ll likely have Josh Alber in the semifinal who’s tough, but Dean did beat him a few weeks ago. The Heil/Meredith rematch would probably be the most talked about match of the weekend. I like Dean here and expect him to win. Here’s the last match between them.

Boo comes in with the 2 seed. His weight is pretty deep here but is legitimately winnable for him. In the semifinal he’ll have either Khristian Olivas or Davion Jeffries. He’s beat both of them and both were pretty close matches. He’ll need to wrestle well to win there.

In the final, he’ll probably have Max Thomsen of Northern Iowa. Thompson beat Boo in OT in the dual this year. Thompson will be the favorite, but you have to think Boo has a shot. Boo looked really good early this year, hit a lull midseason, and has really wrestled well the last few weeks. I’ll be really interested to see how he closes out his season.

Here’s Boo finishing off a major against his potential semifinal opponent.

Jonce is the 4 seed. He needs to finish 3rd or higher to get an automatic bid to the NCAA tournament. Interestingly, John Smith said last week that Blaylock may still be out with an injury and these brackets aren’t final, so we’ll see.

If he’s out Tristan Moran, will be the starter here. A healthy Jonce should win his first match then he’s probably looking at Clay Ream from North Dakota State. Ream is good, but Jonce hung tight with him in a loss in their dual match.

If he wins there he’s in the NCAA tournament. With a loss he’ll have to win two on the backside to finish 3rd and get in. His 3rd place match would probably be vs. Luke Silverberg of SD State who would be the favorite. Blaylock will at least need one upset to get the automatic bid.