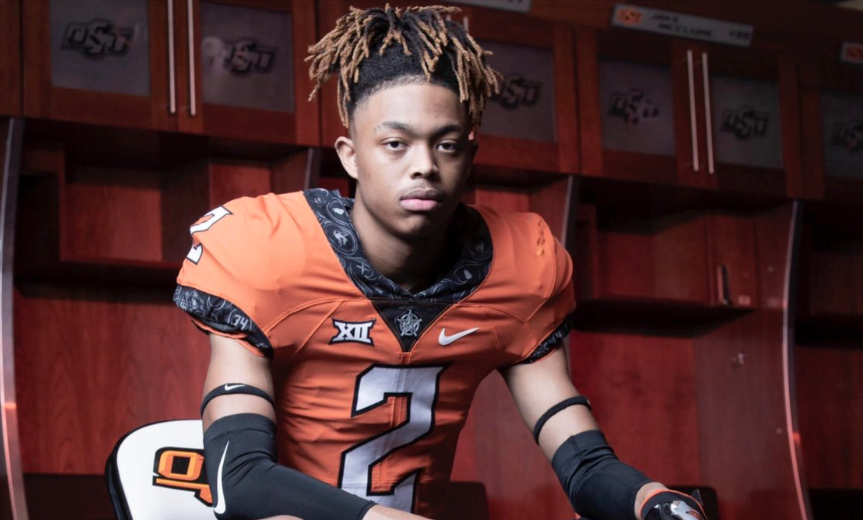 Next up in the 2020 recruiting class film study series is three-star defensive back Korie Black. After covering several transfers, I’m getting back to the high school products. If you want to check out my other posts in this series, see the links below:

Black is the second player out of Connally High School in this recruiting class for the Pokes, along with offensive lineman Trent Pullen. The young corner played both ways for the Cadets, racking up over 500 yards receiving on offense to go along with some stellar player on the defensive side of the football.

I was able to watch one game from his junior season against Lorena High School, a team that made it to the third round of the Texas 4A Division 2 State Playoffs that season. I was able to review two games from this past season against Spring Hill (playoff team, lost to Connally in the second round) and Gilmer (playoff team, lost in the fourth round to eventual champion Pleasant Grove). All of the clips in this post will come from these three games

While watching the games mentioned above, I counted the number of times the ball was thrown to a receiver Black was covering. Although, I would like to point out there may have been some I missed due to the camera angle… or possibly I’m just dumb. Anyway by my count, there were 12 passes thrown his way. Of the 12, two were caught by the receiver, there were two pass interference penalties and Black had two interceptions.

Black was primarily in man coverage in the film I watched, both in press coverage and playing off the receiver. Black has great reaction time and was very rarely caught out of position. He did a good job of squeezing the receiver to the sideline on deep routes, giving the quarterback less room to make the throw. An example of this is shown in the following clip.

Black uses his length well, standing a little over 6 feet tall, and isn’t afraid to get physical with opposing receivers despite only weighing in at 165 pounds. Additionally, he spent time at both corner and safety at Connally, which allows him some versatility in coverage at the next level.

As I mentioned above, there were times when Black got beat and resorted to grabbing and pulling the receiver, which resulted in penalties. There are times when Black looks like he has the potential to be an elite corner, and other times where you can see he needs to refine certain areas of his technique and not over rely on his athleticism. I believe these are coachable things and don’t expect them to be an issue during his tenure in Stillwater.

Due to Black’s previously mentioned athleticism, and the fact that he also played receiver for the Cadets, he has excellent ball skills. I touched on this briefly in the coverage section, but he does a great job of narrowing the QB’s throwing windows by using his length and physicality. This gives him a better chance of making a play on the ball. When Black does get his chance, he attacks the ball at the catch point. The following video below shows one example of this.

Black did a decent job of getting his hands on opposing receivers when in press coverage. He looks to have good awareness of how this can disrupt receiver’s routes and timing with the quarterback. An example is shown in the following video.

However, there were times when he played a little too passively and didn’t initiate much, contact. At the high school level, he could make up for this with his quickness and overall speed, running a 4.66 40-yard dash at Nike’s The Opening, but this will be something he needs to work on at Oklahoma State.

Overall, I think Black will fit in nicely with OSU defensive coordinator Jim Knowles’ style in regards to press coverage.

In terms of tackling, Black does a good job of wrapping up when initiating contact and I didn’t see him miss any tackles in the games I watched. In the video below, you’ll see him blow by a blocker and make the tackle on a wide receiver screen.

If the receiver he’s covering does make a catch, he was always right there to ensure he didn’t pick up any additional yardage. In the running game, he wasn’t very aggressive, but I don’t believe that was part of his role in Conally’s defensive scheme. You would like to see him be a little more aggressive and get in on the action, but I think altogether I think he did a decent job in this phase of the game.

Black has the potential to be a standout player for the Cowboys down the road. I don’t think he will see any action next season, but once he adds a little more weight to his frame, I could see him being a major contributor for coach Knowles.