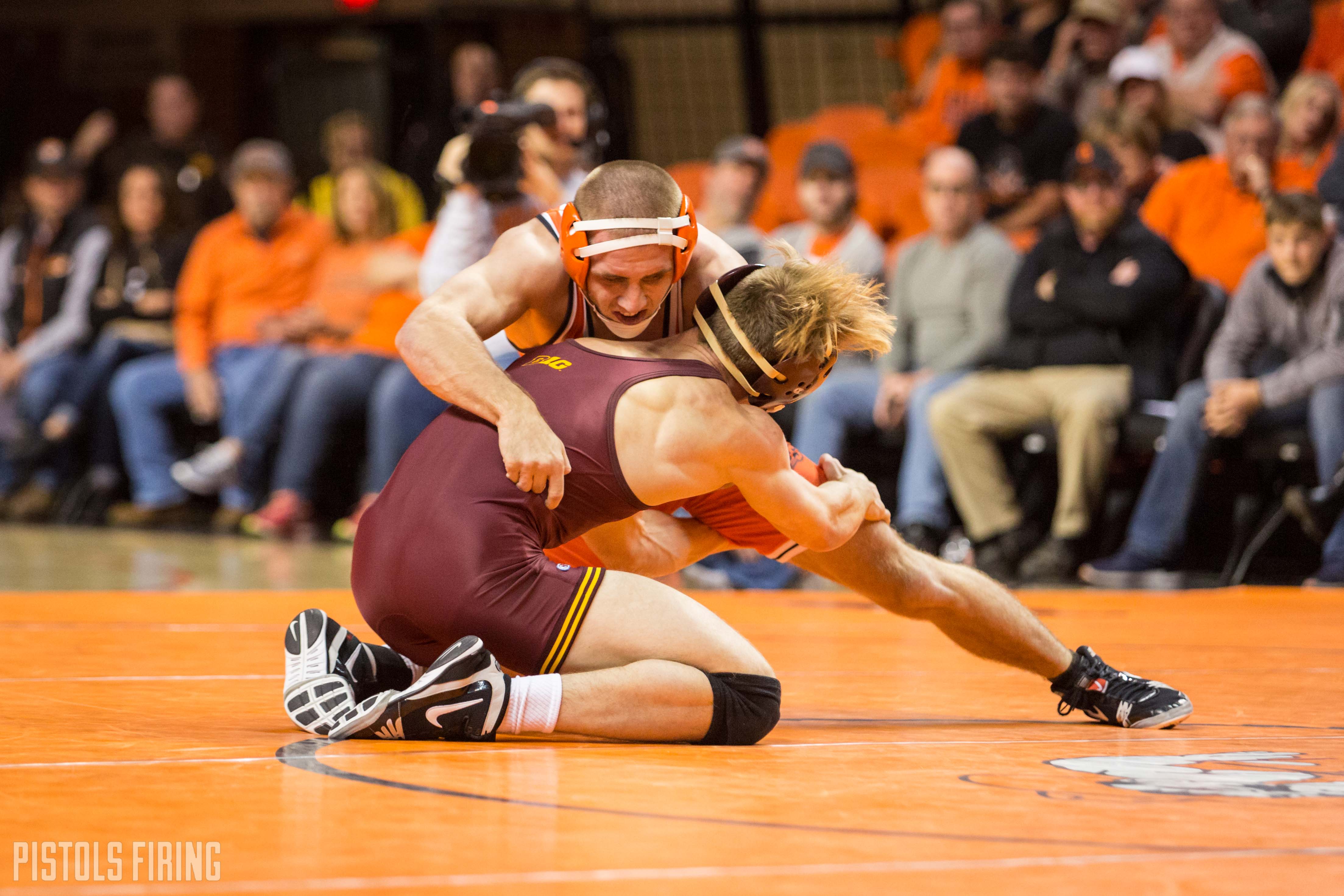 Oklahoma State routed North Dakota State 40-3 in the first Big 12 dual of the season, and one of the Cowboys’ stars hit the century mark in career Ws.

Dean Heil’s 50th straight win was never really in question as he got out to a quick lead with a takedown and turn to go up 6-0. He continued with another turn and rideout to finish the first up 10-0 with around 2 and 1/2 minutes of riding time. Nico Colunga chose neutral in the 2nd and Heil took him down quickly, picked up another turn and finished with a 16-0 tech fall. Heil has not lost a match since his sophomore year against North Carolina’s Joey Ward.

“That is big,” Smith noted. “He had a little bit of a rough week. He was hurt all week and a little bit nervous about wrestling today, but I threw him out there. I didn’t see any reason not to. He did a nice job. That’s what you hope for him to do is to go out there and put him away quick. He did that.”

The closest match of the dual was also the only loss for the Cowboys. At 157, Jonce Blaylock took on 12th-ranked Clay Ream. Blaylock opened with an early TD then gave up an escape finishing the 1st up 2-1. Blaylock then took down and gave up a full period ride finishing the 2nd with the 2-1 lead still, but with a 1:42 riding time advantage for Ream.

Ream got a quick escape in the 3rd to knot the score at 2 all, but essentially held a 3-2 lead with riding time. Blaylock got in on a last second shot, but could not convert and dropped the match 3-2.

John Smith has a lot of fans in Fargo. #okstate pic.twitter.com/xcDQLfaFpt

Smith mentioned after the dual on the radio broadcast that the two matches that most jumped out at him were 184 and 197 where OSU picked up a fall and tech-fall. He said he felt he didn’t really know what they have there yet, so picking up those bonus point wins were a positive.

Right now at 184 Keegan Moore is 6-1 with his only loss coming in a 8-5 decision to 6th ranked Zavatsky out of Virginia Tech. This is pretty good considering three weeks ago Smith was making comments that who he had planned to start at 184 maybe shouldn’t be wrestling for him.

#OKState’s John Smith:
“…maybe there’s guys that shouldn’t be wrestling for us.” pic.twitter.com/6CV5Vt0wzS

In Coach Smith’s radio interview following the dual he also mentioned they had some struggles with their scheduling this year. Even though it’s not listed currently, he’ll be sending most of the team, including the starters, to the Fort Hays State University-Bob Smith Open to get them some work the first weekend of December. One of the more intriguing things of that tournament will be if it gives us any clarity on who will be the starter at 149.

Here’s a breakdown of the scores from each match.