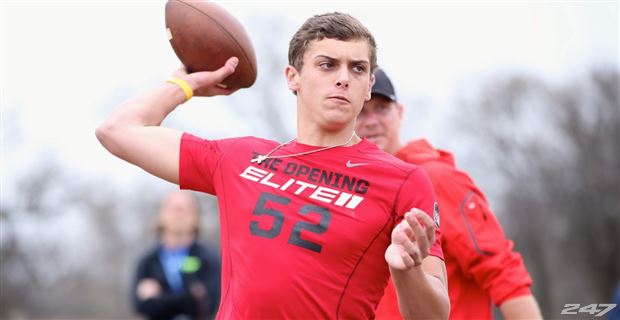 Bleacher Report’s Damon Sayles raved about the 2016 recruit following camp. “There were times when Starkel’s passes were poetry in motion. He has a gunslinger’s mentality, and he showed it and his overall enthusiasm for the game during seven-on-seven play,” said Damon Sayles. “In addition to having a strong arm and a high football IQ, Starkel was also one of the most charismatic quarterbacks at the camp – and his attitude was infectious.”

Starkel has not received an invitation to the Elite 11 finals, which will take place in Beaverton, Oregon, but it sounds like his attitude and personality left as much impression as his athletic ability.

Here’s a look at Starkel running and gunning at the Elite 11 semifinals:

He was named one of five quarterback honorable mentions from the weekend, and Starkel’s steady rise in exposure on the recruiting trail has led to offers from in-state Texas A&M and Yale recently.

As Sayles mentioned, he has a gunslinger’s mentality and a very smooth throwing as you can see.

Starkel is ranked a concensus three-star prospect, but with the national attention he is receiving, I expect he will move up the recruiting rankings soon.