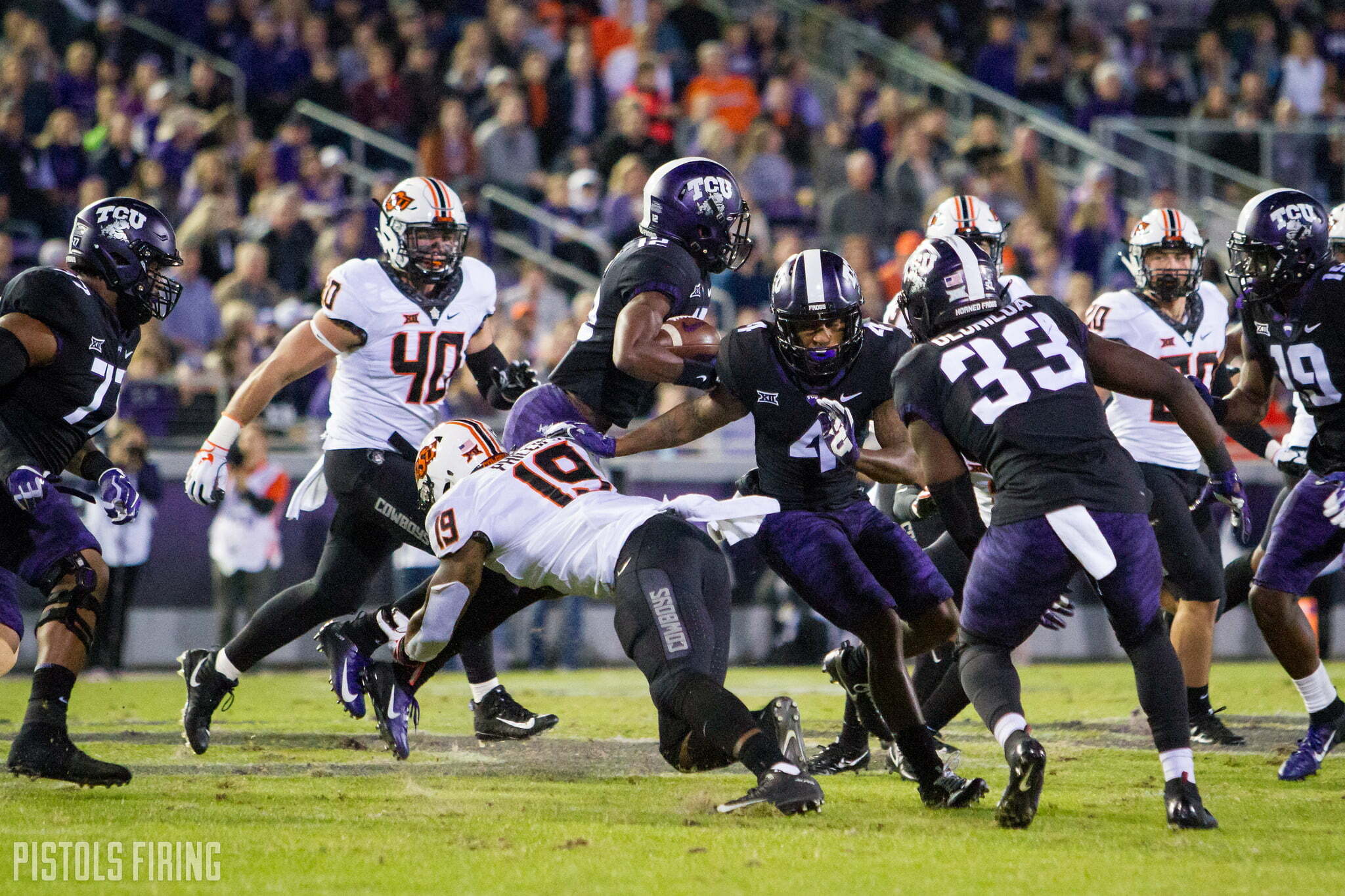 Next up in the recruiting reset series, I will dive into the position which makes up the “2” in Oklahoma State defensive coordinator Jim Knowles’ “4-2-5” defensive scheme… linebacker. Below I will look at what players the Cowboys are losing heading into 2019, what players are returning and what the 2019 recruiting class looks like at the linebacker spot.

Justin Phillips will play in his final game in a Cowboy uniform on New Year’s Eve in Memphis. He’s currently, and will most likely finish as, the leading tackler in 2018 with 92 total tackles. Additionally, he’s recorded 11 tackles for loss and 2 sacks, including this one on West Virginia quarterback Will Grier.

After a breakout game in Bedlam his freshman year, recording 10 total tackles, Phillips redshirted his sophomore season. He picked up right where he left off in 2016 and has tallied 215 total tackles, 23 tackles for loss, 6.5 sacks, 6 passes defended, 6 forced fumbles and 3 interceptions in his prolific career in Stillwater. He was one of the most consistent, and one of the best, players on Jim Knowles’ defense this season.

The returning linebackers will have big shoes to fill in 2019 as they make up for Phillips’ lost production.

Primary contributors Calvin Bundage and Devin Harper have combined for 104 total tackles, 13 tackles for loss and 4 sacks this season.

Bundage did have his share of penalty issues and had some issues getting by offensive lineman once they got their hands on him, but overall he had a solid season and will look to be a major contributor again in 2019. Harper will likely see his role increase heading into next season. He was primarily the backup for Bundage this year, but he proved he has too much talent to be standing on the sideline.

Outside of the two players mentioned above, Phillips’ backup on the depth chart, Amen Ogbongbemiga, showed he’s capable of making big plays, including this sack of Heisman trophy winner Kyler Murray.

In addition, former NJCAA Defensive Player of the Year Patrick Macon will look to make a strong comeback from a foot injury that caused him to miss this entire 2018 season. Other names to watch are Louisiana-native Kevin Henry who has 31 total tackles in his Cowboy career, and former three-star recruit Blake Barron who missed all of this season due to a knee injury suffered a few weeks before the season.

The Cowboys currently have two commitments at linebacker in the 2019 class, Kamryn Farrar and Na’Drian Dizadare. I’ll discuss these two recruits in further detail below.

Farrar was originally committed to Colorado before flipping his commitment to Oklahoma State in September. He was recruited by CU to play their “Buff backer” linebacker/safety hybrid position due to his athleticism. The Dallas, Texas native plays very physical and is not afraid to make a big hit. In addition, he moves very well in space and looks comfortable in pass coverage.

Farrar has experience covering inside receivers as well as running backs on routes out of the backfield. We saw the OSU linebackers get burned by running back wheel routes on occasion this season, but I don’t think those will be an issue for Farrar. He will need to get with Rob Glass to put on a little weight in his early college years, but I could see him thriving in a Calvin Bundage-type role for the Pokes.

Similar to Farrar, Dizadare is extremely athletic for the linebacker spot. The Evangel Christian Academy product is a sure tackler who possesses the strength to bring down pretty much anyone he gets his hands on by himself. He also fits the Calvin Bundage mold like Farrar, and looks comfortable dropping into coverage. Dizadare definitely has room to grow in regards to his pass coverage, but the talent and athleticism are there.

The three-star recruit will also need to bulk up a little bit once he gets to Stillwater, but this shouldn’t be a problem as he’s no stranger to the weight room, which you’ll see in his highlight video below.

Outside of these two, there are only two 2019 linebackers Oklahoma State has offered that could still yet commit, Kevon Glenn and Shammond Cooper. The four-star Cooper left the Pokes out of his final four schools, and although he isn’t announcing his commitment until January 3rd, OSU isn’t in the picture. In regards to Glenn, he had the Cowboys in his list of top schools, but after a recent offer from Florida State, it’s looking like Glenn may be Tallahassee bound.

There’s also three-star Ni’Kendrick Carter, who recently committed to Florida International. According to PFB’s Kyle Boone, Carter is still interested in Oklahoma State, but his offer may no longer be commitable.

My guess is the Pokes will stay put with the two commitment mentioned above, especially since they already have a 2020 commitment in Cy Creek’s Josh White.