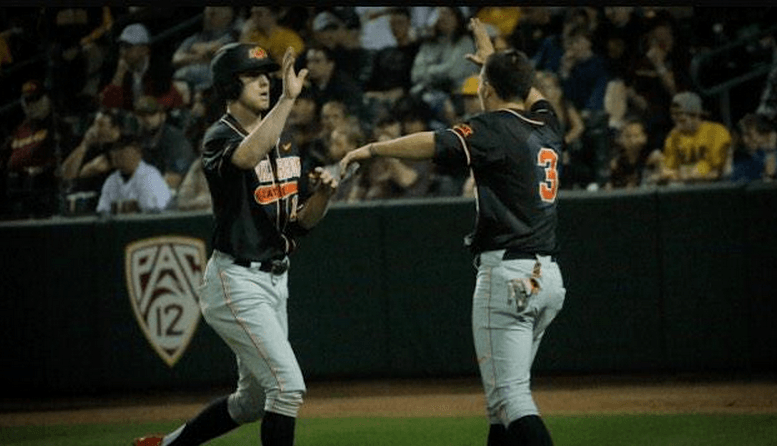 OSU won three of four over the weekend. (via Twitter.com/GarrettMcCain)

The offense had an Oscar-worthy performance this weekend, while the pitching staff was as sharp as Bradley Cooper in American Sniper.

The offense had a performance worthy of an Oscar this weekend, while the pitching staff was as sharp as Bradley Cooper in American Sniper as the Pokes took three of four in the desert.

The Big 12/Pac-12 Challenge was this past weekend, which saw the Cowboys travel back to Arizona to play four games. What at first looked like a boring and unsuccessful trip turned into an offensive explosion and a smashing success1.

The lowlight of the trip was Thursday’s game against the other OSU2. Early runs were problematic for the Cowboys, finding themselves down 5-1 when starter Tyler Nurdin was pulled halfway through the 5th. A two-run rally in the 7th closed the gap, but would turn out to be the final score. 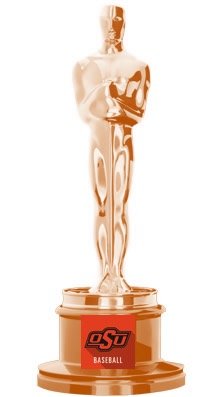 The Cowboys showed in the next three games why losing last season’s leading sluggers Zach Fish and Tanner Krietemeier might not be a problem. OSU amassed 33 runs and 40 hits3, a three-game outburst of double-digit runs that hasn’t occurred in almost five years.

As a team, the Pokes hit .351 with 12 extra-base hits (including three homers), 12 walks and six stolen bases in their three wins. Every facet of the offense was in sync, which relieved a lot of stress off the pitching staff.

Speaking of, the pitchers weren’t slacking either. They gave up just 10 runs in four games, with an impressive 32/10 strikeout-to-walk ratio. The crown jewel of the weekend was Jon Perrin’s start Friday, throwing six innings with six strikeouts and not allowing a hit.

This looked like the Cowboy team that had a preseason top-five ranking, and the upcoming schedule should allow the team to carry this momentum forward.

Williams was really locked in this week. He hit .583 (7-12) with two doubles and a home run, while contributing two RBIs and five runs. The starting first base job is his to lose at this point.

Honorable mention goes to senior Gage Green, who gave his best Moneyball impression with a .389 average, five runs, four RBIs, two stolen bases and a two-homer game Sunday. This week he played catcher as well as all three outfield positions.

This was a no-brainer. Perrin pitched six innings of no-hit ball, striking out six in just 84 pitches. While some might have disagreed with not letting him go after the no-hitter, I think it was the right decision. It’s a long season, and the Cowboys are going to need more performances like this from the senior if they want to make it to that Field of Dreams in Omaha.

Pokes want him back pronto.

Much better than the view outside my window…

This would be an awesome tour.

Thanks to the @Dbacks for giving us a tour of their beautiful new Spring Training facility today! #okstate pic.twitter.com/Np8vh7teYk

The offense was really clicking this week.

It’s another four-game week as the Cowboys return from the sunny desert to a snow-covered Stillwater. The 2015 season home opener is Wednesday against Missouri State (4-1), who is averaging 9.2 runs per game this season. First pitch is 4 p.m., assuming the weather doesn’t play a part.

The Western Illinois Fighting Leathernecks (0-2) visit Stillwater looking to play the role of Rocky and get a knockout of the Apollo Creed Cowboys4. The three-game series starts Friday at 4 p.m., with Saturday and Sunday’s games schedule for 1 p.m. start times.

1. After starting the season with seven straight games in the state of Arizona, the Cowboys are about to start a 15-game homestand. They don’t play outside of Stillwater until they travel to TCU to start conference play.

The highlight of the homestand will be the three-game series against Illinois, who have started the season 6-0-1 and could be ranked by the time the March 6-8 series arrives. OSU will want to build a lot of confidence in the next month before Big 12 play begins, and how these next few weeks go could determine how the rest of the season plays out.

2. There still hasn’t been an update on Donnie Walton, who hasn’t played since the second game of the season with a wrist injury. Jacob Chappell has struggled in his place, hitting .167 with two runs and two RBIs in six starts at shortstop.

If Walton is going to miss an extended amount of games, OSU might need to go in a different direction. One option is to move Tim Arakawa over to short, and play Andrew Rosa at second, which is what the Cowboys did to end the second game against Arizona State.

3. The pitching staff looked much better this week, but Tyler Nurdin is still struggling. He started the only loss of the week, giving up five runs (three earned) and nine hits in 4.1 innings. His ERA now stands at 5.87 and he’s allowed 15 hits in 7.2 innings this season.

1. Unlike last year’s nominee Gravity, which started out boring… and wound up putting me to sleep.↩

3. …which is about the same number of hits Leonardo Dicaprio probably should have won Oscars for.↩