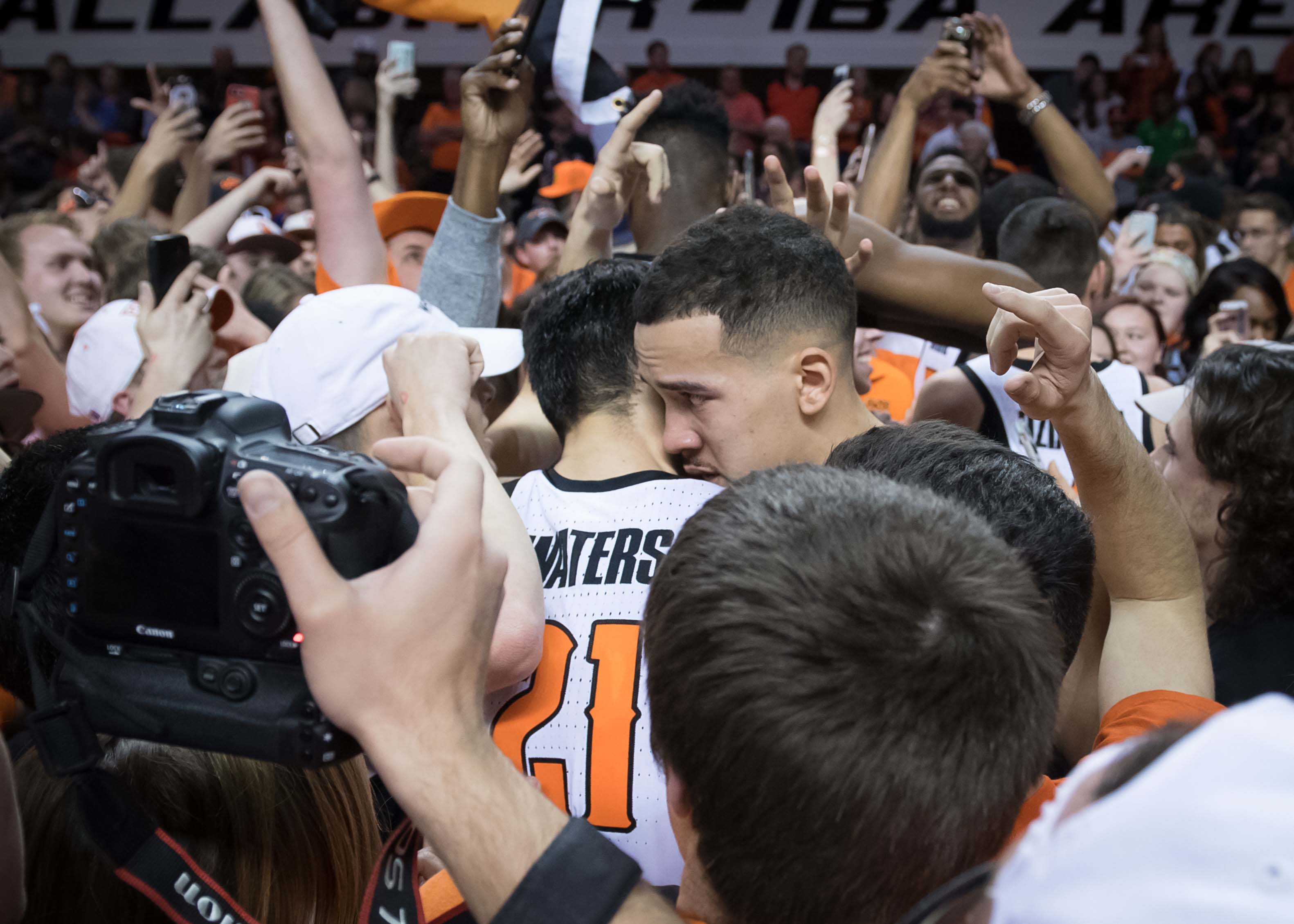 Oklahoma State’s season is over. I’ve allowed myself some time to process everything that happened this year. It was a season of ups and downs, and one that, for what feels like the first time in a while, has me excited about the future of the program.

That said, I have some thoughts to unload about what went down in the 2017-2018 and looking forward to next season.

1. This Season Was a Success

I’m writing this point on Saturday, March 10, the day before Selection Sunday, because I don’t want the selection committee’s decision or whatever happens in the NCAA tournament or NIT to affect what I think.

For OSU, this season was a success because of what they achieved compared to expectations before the season began. Before the season began, I predicted the Cowboys’ record would be 17-14 and 7-11 in conference play. (Also, I went 2-7 in my second half prediction so definitely don’t take me to Vegas.) While I wasn’t way off, I never could have predicted that their 19 wins would include regular season sweeps of Kansas and Iowa State. No one could have predicted road wins at both Kansas and West Virginia, or that OSU would have a school record 10-wins over top-10 opponents.

Most of all, I didn’t expect Mike Boynton to prove he could stand toe-to-toe with the likes of Bill Self, Lon Kruger, and Bob Huggins. He did exactly that going 5-3 against those legendary coaches.

This wasn’t a great Oklahoma State team. They’re not the best this decade. But they are one, no matter what happened in the postseason, that I will always remember as a successful one. Both for what they achieved, and as Boynton has put it, for the foundation they have laid.

2. Give Holder Some Credit 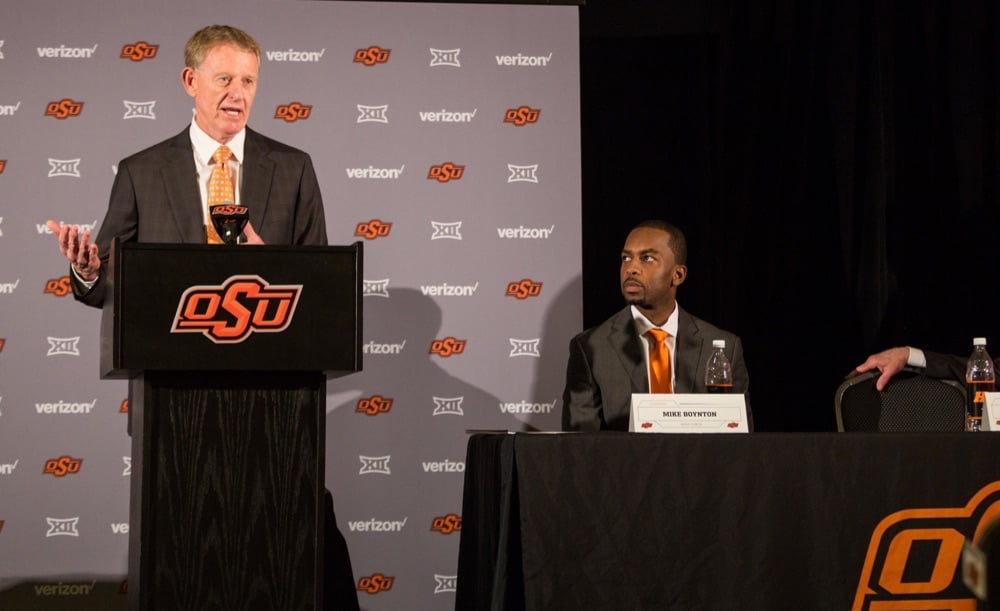 While most people will say Holder got lucky, I think his expectations finally paid off.

Boynton on the other hand — so far at least — seems like the best of the three (recruiting pending).

And Holder deserves credit for that. Because when we all assumed the worst, Holder saw something in that interview it took all of us at least half a season to see: the man that Boynton is (or at least appears to be).

I think that’s something we sometimes take for granted. Stillwater isn’t for everyone. There’s something about the ‘Cowboy Way’ that I think extends beyond the football team. Think about it. Since Holder became AD, how many former OSU players or assistants have become head coaches? Gundy. Bratton. Holliday. Gajewski may be an OU alum, but he’s still from the state.

Finding the kind of coach that fits Stillwater isn’t easy. You want the kind of guy who slaps the maple inside Gallagher-Iba when his team is about to upset their in-state rivals in overtime.

I think he was telling his team, "#LetsWork": Mike Boynton slaps the floor with 30 seconds left in OT. #Bedlam #okstate pic.twitter.com/5RTuLmVRBW

That is the kind of coach you want in Stillwater.

We expect athletic directors to be infallible. But they’re human and can be fooled just as easily as you and me (especially when you think your opinion is better than theirs). In seems in this case, third time was the charm. Holder deserves credit for it.

Next season, this Oklahoma State team will look very different. Three starters and multiple role players won’t be on the roster when the Cowboys hit the hardwood in October. That means OSU will lose four of their top six scorers including their top three.

While that seems daunting, I do like what is returning. Even with the surprising news that Yankuba Sima is leaving, OSU will have juniors Cam McGriff and Lindy Waters, who should take a step forward next season, especially with increased minutes.

Those two guys will be likely starters along with transfer Michael Weathers (who I think is going to be really good) and that’s not a bad first three along with, presumably a few transfers (a la Kendall Smith). I’m not picking them to win the Big 12, but I also don’t think they’ll be in last place either.

Now, a lot will rest on what Boynton is able to do with the guard positions. He could use a couple, preferably to land a high school player and a grad transfer. Bringing in another guard alongside Waters, Weathers and Curtis Jones who can defend and another center would also help. But all that being said, I don’t think they’ll take a major step backwards. (Have I mentioned how good I think Michael Weathers is going to be?)

4. The Schedule Has to be Better

Look, I don’t disagree with all the points that it’s ridiculous to treat a win over a team with an RPI of 175 like they’re miles away better than a team with an RPI of 275. They are different teams (think 3-9 FCS football team vs. 3-9 Conference USA team), but saying that scheduling one is more of a challenge than the other is a bit ridiculous, especially when you’re playing that game on your home court..

However, the rules are the rules, which means OSU has to play by them.

This year, don’t schedule four sub-300 RPI teams. You can have one or two, but make sure when you’re scheduling teams from the Southland Conference and Summit League, you’re aiming for teams that normally finish near the top.

There’s no reason to think you can’t beat South Dakota State in Stillwater. Top teams don’t like scheduling mid-major programs that “might” beat them. But why not call up UMBC, fresh off their historic 16-seed upset and get them on the home schedule? You don’t think you can sell some ticket off that? Why not call up Lipscomb? They return a lot of players from this year’s NCAA tournament team.

The benefit from those is a strong non-conference schedule. That removes that lazy argument from keeping OSU out of the tournament next year.

The perfect schedule for OSU, to me looks like this, assuming they stick with 13 non-conference games:

Do that, and they’re likely to win 10 to 11 games at worst, and not get griped at come Selection Sunday.