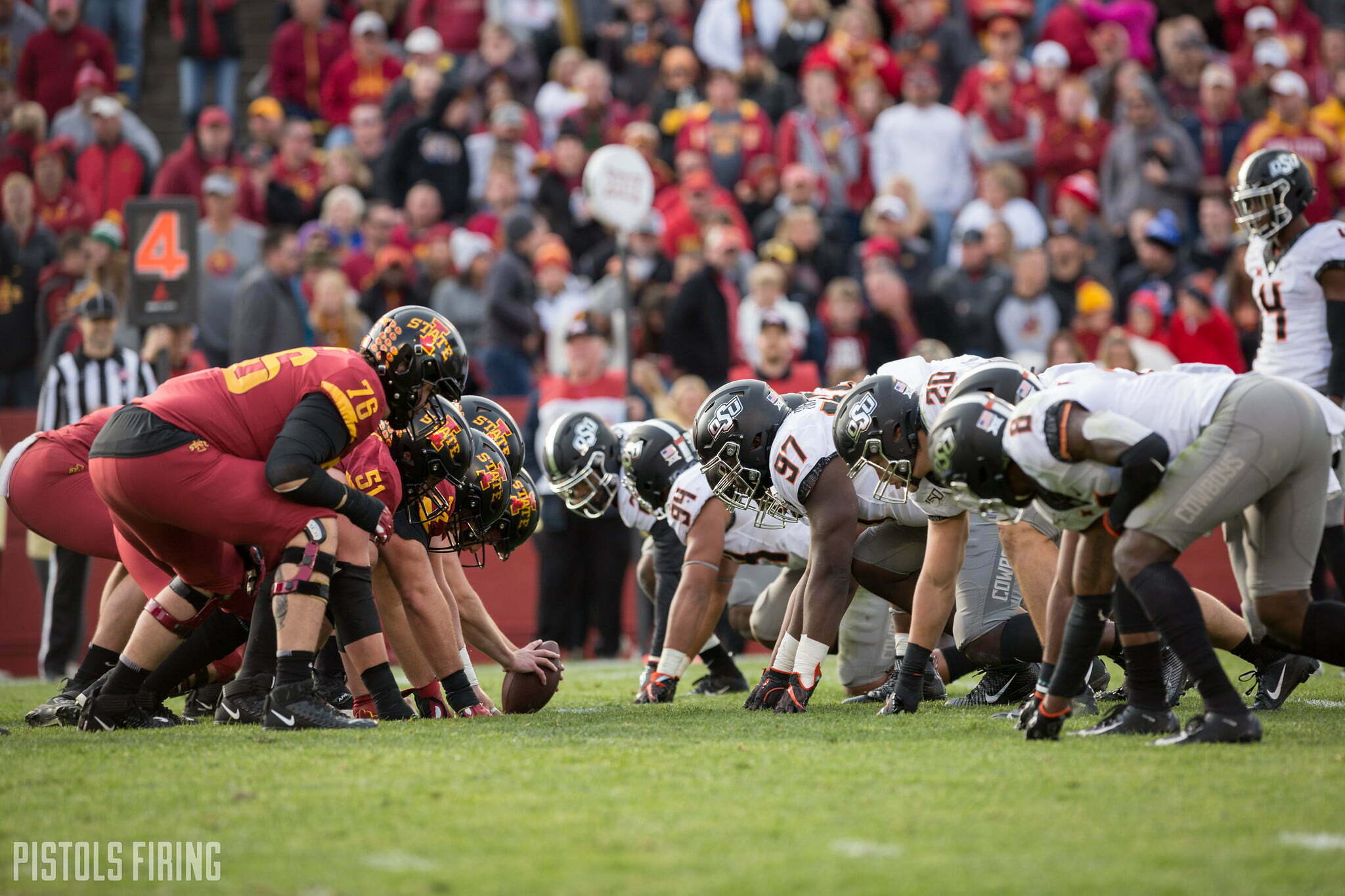 In case you’ve been living under a rock (and without wi-fi) for the last 72 hours, it looks like Oklahoma and Texas are leaving the Big 12 in their dust as the league’s bell cows stampede toward the greener pastures of the SEC.

Whether OU-Texit™ plays out in 2025, at the end of the current TV deal, or 2023 — or next year — the two schools’ addition would make the SEC the first 16-team super conference, paving the way for what seems like the inevitable era of super conferences.

There’s a clear path to four 16-team super leagues and it involves the other three power conferences poaching from the Big 12’s eight leftover programs. Some will be left out.

Here’s a look at what four 16-team superpower conferences might look like when all that dust settles.

Carson Cunningham and Colby Powell discuss the implications of OU and Texas leaving the Big 12 for the SEC and what it means for OSU in the latest Pistols Firing podcast.

The ACC currently has 14 official members and scheduling ties with Notre Dame, but that would become official too.

Notre Dame has been able to have its cake, eat it and even make a playoff appearance while remaining unattached. But facing the pressure of being left out of a super conference and any potential ensuing playoff implications — but mostly for the purposes of this hypothetical exercise — I’m gonna say that Notre Dame solidifies its ties with the ACC and signs on the dotted line.

West Virginia obviously makes sense geographically but, more than that, the Mountaineers will be reunited with several former Big East foes and two of their biggest rival schools: Pittsburgh and Virginia Tech.

What I’d miss: Bob Huggins and those throwback helmets.

What I’d love: I’ll just say that I won’t miss that John Denver song getting stuck in my head.

Kansas makes a ton of sense in the Big Ten as a basketball blueblood that fits within the conference’s mold academically. And the Ohio States of the world love another automatic W on the slate come football season.

Kansas State might earn me some groans but it works geographically and keeps the two state schools together. (See how this works, OU?)

Neither team moves the needle much for football, but watering down the league’s depth has not hurt the top-heavy Big Ten yet. A comparable football duo, Maryland and Rutgers, was added the same year that the College Football Playoff debuted and the conference has made the Final Four five of seven years.

What I’d love: Seeing the conference try to avoid a rebrand. Maybe they go with Big 6(Plus)Ten or Big SixTeen.

This makes a ton of sense to me, specifically for Oklahoma State. Though, two orange-and-black OSUs in the same league is a bit redundant. Maybe a forced Oregon State rebrand is on the table if Chad Weiberg has enough leverage.

Marshall Scott did a great job of laying out a Super Pac that included two Big 12 teams (OSU and Texas Tech) and Boise State and Boone did a nice job explaining why a Big 12/Pac-12 merger would do well. I’m going to ride in Marshall’s wave but swap in Iowa State instead of Houston. It’s purely a football decision to me.

What I love: A fresh start for OSU.

Who knows what implications this type of realignment would have on the playoff system, but the opportunity to avoid its Achilles heel (that team down the road) could provide a light at the end of the tunnel each year, at least for fans. (Players don’t look at it the same way as you do.)

Either way, sign me up for USC and Oregon football and hoops against the likes of Arizona and UCLA.

The rich get richer.

I’m actually intrigued to see how each team will fare in the SEC. I think Oklahoma will hold its own, but Sooner fans might have to go from expecting a conference trophy every year to chanting an acronym come playoff time.

Texas hasn’t held its own for much of the last decade or so in the Big 12. I have a feeling this move might find the Austinites jockeying for SEC status with the likes Tennessee and Missouri in their Promised Land. Oh well, we know UT has enough dough to launch a coaching search every 3-4 years.

Even if OSU and OU never play another football game against each other, the rivalry around these parts will still be palpable. But now the “little brother” talk will echo even louder across the state without the Cowboys’ chance to occasionally quiet it with an upset in Bedlam.

If you’re an OSU fan that consumes radio call-in segments, you might want to sign up for Audible or go searching for a few new podcasts.

Here’s a look at those super conferences.