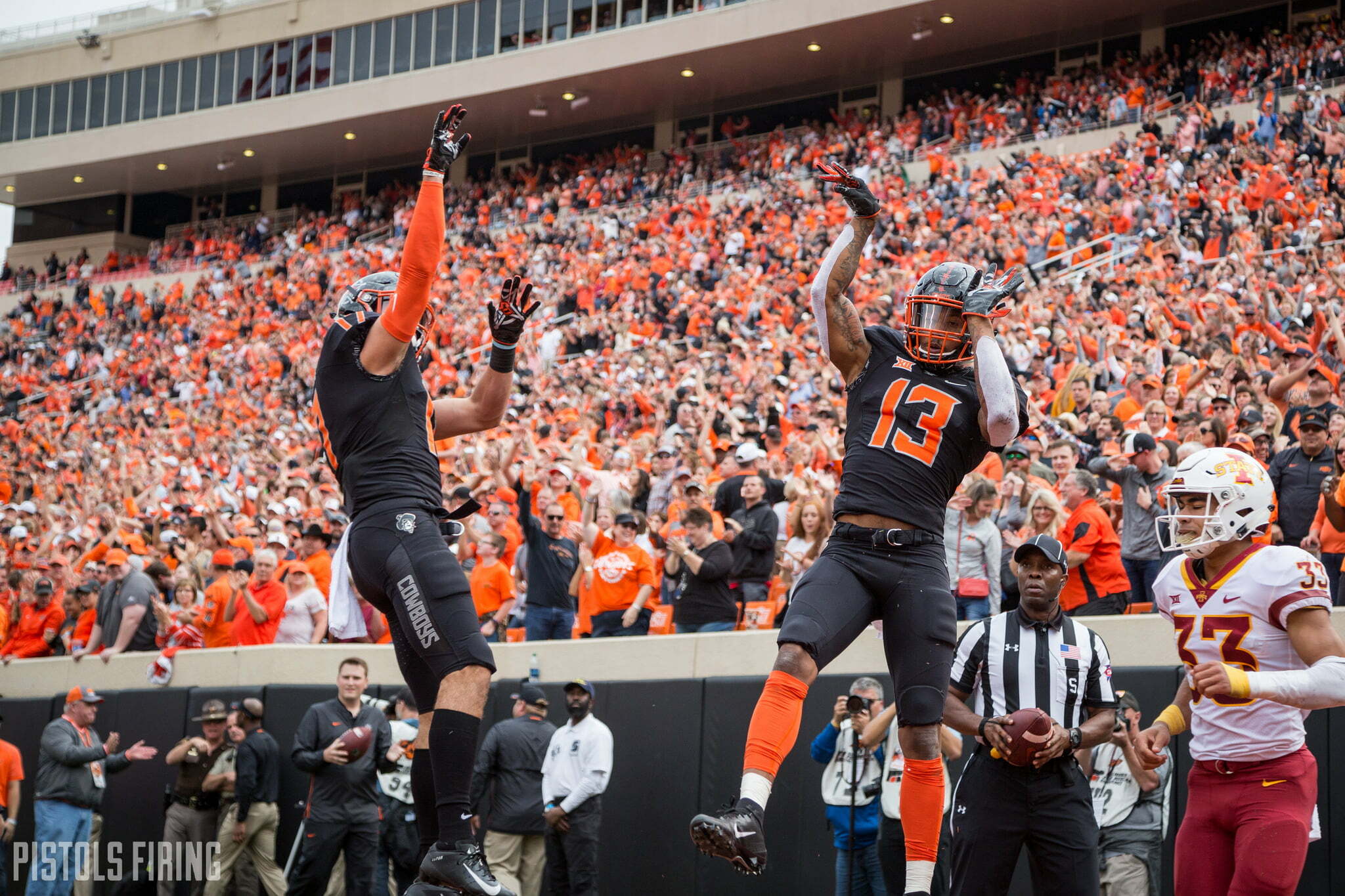 The Cowboys completed a spastic season with an uninspired performance in Ft. Worth. Their 9th-place finish in the Big 12 is the worst at Oklahoma State since Mike Gundy’s first year at the helm.

But … there were plenty of high notes that shouldn’t be forgotten from the last three months. Even if they make those low points that much more confounding.

So let’s glance back over the 2018 regular season for all its ups, downs and the few in-betweens.

I would not have seen myself typing any name other than Justice Hill in this category in September. And probably not even a month ago. But Tylan has put together an historically good 12-game stretch that might just have won him a Biletnikoff Award.

Wallace hasn’t put up his normal gaudy numbers the last two games, thanks in large part to defenses trying to scheme him out of the game plan. But he’s still been incredibly efficient on the year, catching 58.1 percent of his 136 targets.

Most of all, he’s been the Cowboys’ go-to playmaker on offense all season long — and it’s not really that close. Wallace has been targeted on a ridiculous 30.4 percent of OSU’s passes and still maintains that extremely efficient catch rate.

To provide a little context here: The highest share of that workload James Washington ever saw was 28.7 percent during his junior season, sans an injured Marcell Ateman, and he turned in a 54.1 percent catch rate.

Rookie of the Year: Chuba Hubbard

There were a number of first-year players that took the field for the Pokes in 2018 and made impacts in different ways, but this is no competition.

Chuba Hubbard showed his world-class speed early and often as OSU’s third-string back, as well as glimpses of the spark he can provide in the return game.

The more touches he got, the more impressive he looked. Whether or not he is RB1 or RB2 behind Justice Hill next year, expect Chuba to:

Of the three good wins that Oklahoma State earned this season, I don’t think I felt any better about the Pokes than on Homecoming night, and it wasn’t just the pre-game COOPs I enjoyed during out PFB our tailgate (shout-outs to all of you that stopped by). It also wasn’t the gorgeous throwback threads the Cowboys donned. Though I’m wearing my No. 21 Barry jersey right now.

That game was just fun from the opening kick because it was a much-needed breath of fresh air and shot in the arm for Cowboys fans. OSU was still licking its wounds from a bye-week slump that started with a maligned Manhattan trip, but it didn’t take long for the Pokes to feed off of the energy of that sell-out crowd.

Taylor Cornelius landed an opening-round haymaker to Tylan Wallace that knocked the ‘Horns back on their hooves and pretty much set OSU on the path to an upset.

UT would battle back with a jab here, a body blow there, but OSU was able to bob and weave its way through the second half and to a big-time win, even if it included some late infighting at center ring.

Best Trick Play: The (Sort Of) Fake Punt Against Texas

During the above-mentioned upset over Texas, Oklahoma State did something we’ve been clamoring for what seems like years.

The common gripe on conservative coach who hid behind a cavalier mullet, was his reluctance to coach like an underdog in underdog situations. He shed that cloak a bit in 2018, but never more than on this one drive.

With the Pokes leading by 10, and close enough to halftime that Gundy would normally try to hide the football under his hoodie and wait out the clock, he instead dialed up the “fake” punt on fourth-and-1.

The trickery worked drawing the UT defense offsides despite a controversial shifting of OSU’s line.

A few plays later on that drive, the Pokes would face another fourth-and-1 and Gundy would thumb his nose at all of us for even imagining that he would coach scared.

Don’t listen to Kirk Herbstreit, this isn’t a commonplace “Gundy wrinkle” but it worked.

Despite my swapping the all-conference tailback for Tylan in the MVP slot above, how many more wins does Oklahoma State finish with if it has a healthy Justice this last month? Maybe none. Maybe two more.

Chuba performed admirably in his stead in Norman, but one has to wonder, in such a close game, if OSU’s bell cow and probably best overall player wouldn’t have made a difference.

For all we know, Justice may have played his last down in orange. If he has, he’s already done enough to go down as one of the best running backs in Oklahoma State history. And that’s saying something.