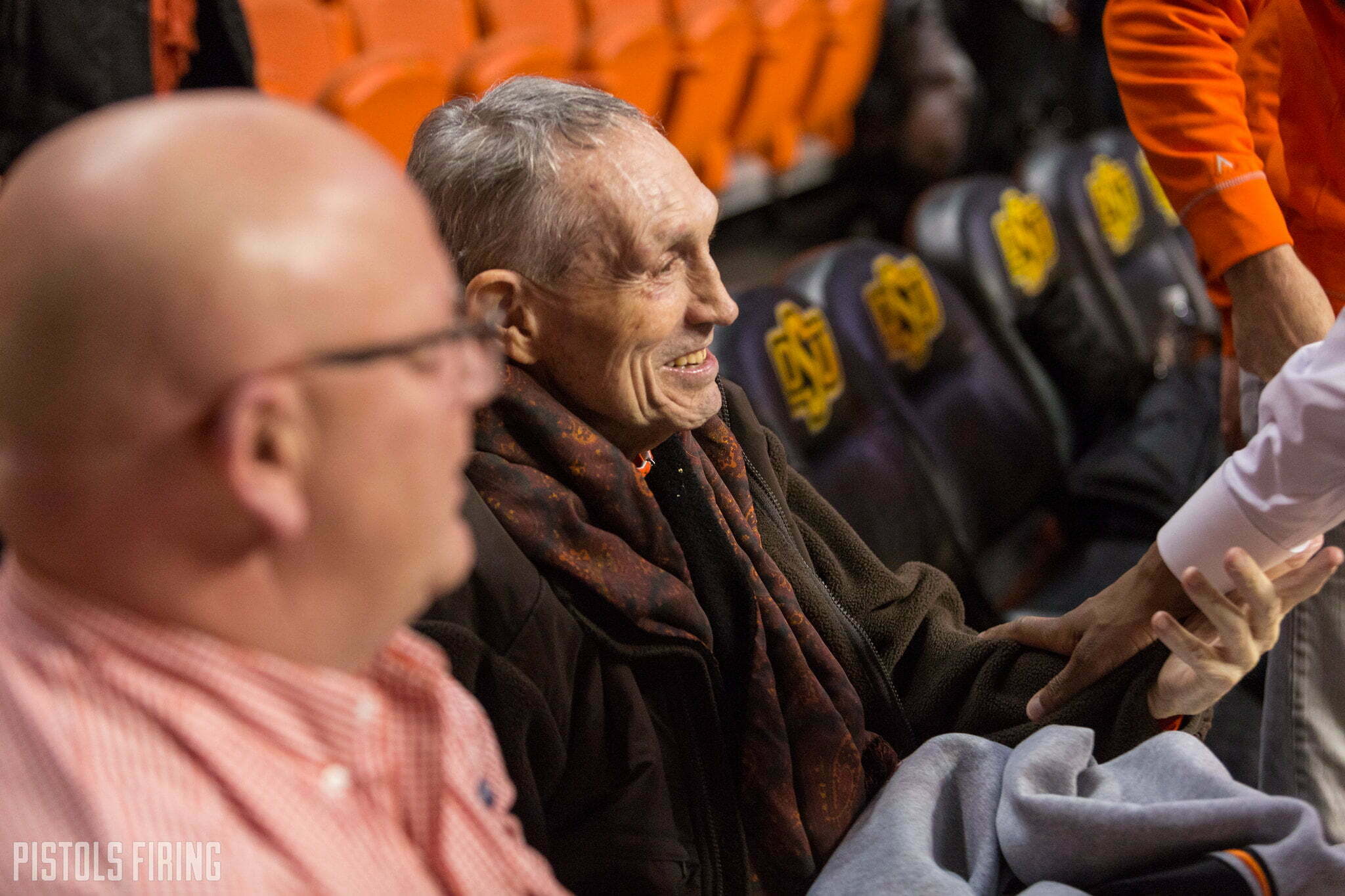 How do you sum up a life like Eddie Sutton’s in 800 or even 1,200 words? It’s an impossibility of course and maybe even patronizing to try and distill 84 years of life into a single column. And yet, the collective tributes to one of the great personalities and people in OSU history create a wonderful mosaic of someone who — at his very best — was revered within the industry in which he thrived.

But lionization within an industry rarely tells the whole story, right? Because industries are broad, we have to capture them in inhuman ways like how many games you won or how many titles you secured. Maybe, at best, we get national anecdotes about how good a person is when it comes to Xs and Os or how he or she is a terrific interview.

These are pieces, though, not the whole puzzle.

As I’ve thought about Sutton’s death and life over the last 48 hours, there’s one idea I keep coming back to. Maybe it’s more of an ideal than idea. That this man — maybe Bucklin, Kansas’ most famous human — could somehow galvanize an obstinate kid from Chicago, a Mormon from Nebraska, a set of twins born in Delaware, a legend from North Carolina and that he could do all of this while simultaneously teaching them how to run defensive sets and how to be adults. All in the wake of the greatest tragedy in university history.

Sutton’s genius, if he had one, was that he didn’t really care who you were or what you had done. He wasn’t a great recruiter by traditional standards (the Gundy parallels in Sutton’s career are honestly 👀), but he was the ultimate harmonizer. He was able to take seemingly incongruent ingredients and absolutely cook inside the house his old coach helped build back during World War II.

Sutton’s career as Oklahoma State’s head coach represented good times — maybe the very best times — in Stillwater. In the same way OSU fans have experienced a 10-year(ish) golden era of Oklahoma State football and speak in hushed tones about Boone Pickens Stadium nights that seem to stretch into the ethereal, Stillwater was built on those winter nights where GIA was the warmest place in town.

GIA was Stillwater’s hearth for a decade and a half. That baton was eventually passed to Gundy and the football program, but the embers stoked by Sutton for the full breadth of his career at OSU kept us all toasty when everything else in our always-turbulent sports world seemed to be in flux.

Berry Tramel said this recently in his excellent look back at Sutton’s life, but Sutton could not have been born at a more perfect time. His hard-ass “get the pads on” schtick would not have played as well in the player-empowerment era of 2019 as it did in 1999. In the ways that Mike and Mike (Gundy and Boynton) have adapted to players in the current landscape, I’m not sure if Sutton would have been able to do that.

“There’s so much going through my mind in 2004 [during the NCAA Tournament],” Tony Allen said recently. “I’m like, ‘I’ve got to make it. I’ve got to make it.’ So I probably had an episode in front of him. Probably wasn’t buying in. He looked down, he was on his board. ‘Stand up, you need a hug.’ He gave me a hug.

“I looked, I’m like, ‘What the hell?’ I remember going nutty after that. Buckets, crossover, passes, steals. I went nutty. I took over the game.”

You’ve probably heard people say Sutton was complicated, which is a thing people say after someone dies when they don’t know how to reconcile the parts of someone’s life that don’t match up with their ideal of what that life was. Sutton wasn’t complicated, though. He was just human. He did stupid things. He did great things. Both were amplified because of the platform he created, but he was just a human, kind of like the rest of us.

I never got to cover Sutton so I don’t have any great insider-y stories or quips from talking to him or being around him. I was a child when he took the reins in Stillwater. I was 5 years old when he had his introductory press conference in Stillwater with Mr. Iba riding shotgun.

I went to a lot of games he coached in the time following that press conference. Games with my dad who was the same age then that I am now. Games featuring Byron Houston and Andre Owens and Sean Sutton. We moved from Tulsa to Houston in 1994 so I didn’t go to very many games after that, but I still remember getting to stay up late as a 12-year-old for Big Mondays in Norman or Lawrence. Those were the Adrian Peterson and Desmond Mason teams. We watched them all.

So while I don’t know exactly what went into the elixir Sutton created that resulted in 15 straight years of unparalleled success, I do know this from my time covering myriad teams, organizations, players and coaches: When something special is happening outside the walls of a building it almost always means that something even more special is happening inside of them.

Doug Gottlieb alluded to this over the weekend when he wrote the following.

You told us that when we play “Oklahoma” or “the Jayhawks” we ought to bring a pup tent cause it was war, not for the weak. You were right. Coach you imparted so much wisdom on us, so many simple demands that made us more disciplined men and better teammates, all while giving us the most honest feedback on earth, thank you … it remains an irreplaceable time of growth in all of our lives.

Sutton was not only the steward of a kingdom that had long since been run down by decades of incompetency and years of disregard, he was also its rebuilder. A through line from Iba to whoever would put the pieces together after Sutton (we have yet to reach that era). The brilliance within this, though, is that he always seemed to want to use this power for good, for the betterment of the people around him. This is a dangerous thing to think about someone you were never around in a meaningful way, I realize, but he seemed genuine.

Eddie Sutton was my coming-of-age coach. The most powerful figure for OSU’s most prominent teams, which I rooted for as I graduated from boyhood to the purgatorial time between boyhood and manhood. We are so formative in those years before we enter into the faux adulthood that — at best! — is a facsimile of what our lives will eventually become.

What is forged in that in-between takes root because our hearts are so pliable and our minds are such fertile grounds for the future. I was that age when Eddie reigned in Stillwater. Maybe that’s why I think about him differently than everyone else. The famous father figure for so many Oklahoma State players but also, strangely (?) for so many Oklahoma State fans as well. My experience of Mike Gundy and Mike Boynton and even somebody like Gary Ward was very different than my experience of Eddie Sutton.

When you think about Eddie, what photo comes to mind? Maybe his scowl (probably his scowl) or maybe the unadulterated joy of cutting the net down after that St. Joe’s game. For me? It’s the slack-jawed “mouth slightly agape because Desmond just threw the stupidest pass in basketball history” look. The disappointed dad. This one. He was — collectively — our OSU dad. 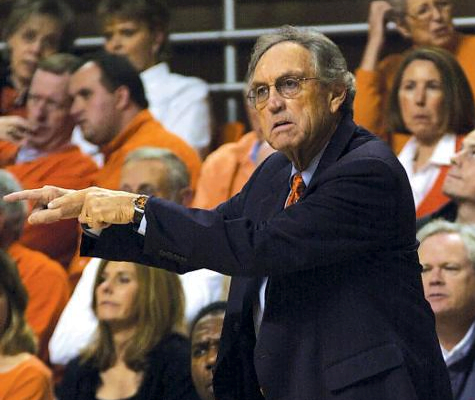 Though he was never young in my experience of him, to me Sutton represented the unending hope of our youth. Mike Holder talks about this idea a lot. Gottlieb talked about it above. The boys he recruited became men along the way. But so did the fans who followed along. That was meaningful in a way that I’m not totally sure is replicable in any other way or at any other time in our lives.

Life may have been topsy-turvy, but there was Eddie winning 24 games every year. There was that unmistakable voice on the radio explaining why he fed Fred Jonzen late against Nebraska or why he pulled Mo Baker with 6 minutes to go (this actually would never have happened). There he was, stone-faced on the bench glaring at Andre Williams. He was an oak at a time when there were no oaks (though the entire arc of his story is also a good reminder not to place our ultimate hope in fallible men).

In that sense, Sutton’s place in OSU history is secure. He might not be on the objective Mount Rushmore in OSU lore, but he’s certainly on my own personal Mount Rushmore because of the time of life in which I experienced his career.

When my favorite team ever moved on after that heartbreaker to Florida in the 2000 regional final, Sutton was quintessential Sutton in the postgame presser. He was asked about Desmond Mason, Brian Montonati, Joe Adkins and Doug Gottlieb. What he said about them then can be said of him now.

Simple words that convey something that went miles beneath the surface to the place where life trajectories intersected in a little town in northeast Oklahoma for a couple of years or more and souls mingled at a time when the entire world seemed obtainable. Words that the entire OSU community is feeling in these days. He was speaking in metaphorical terms, but this one, well, this one is forever.