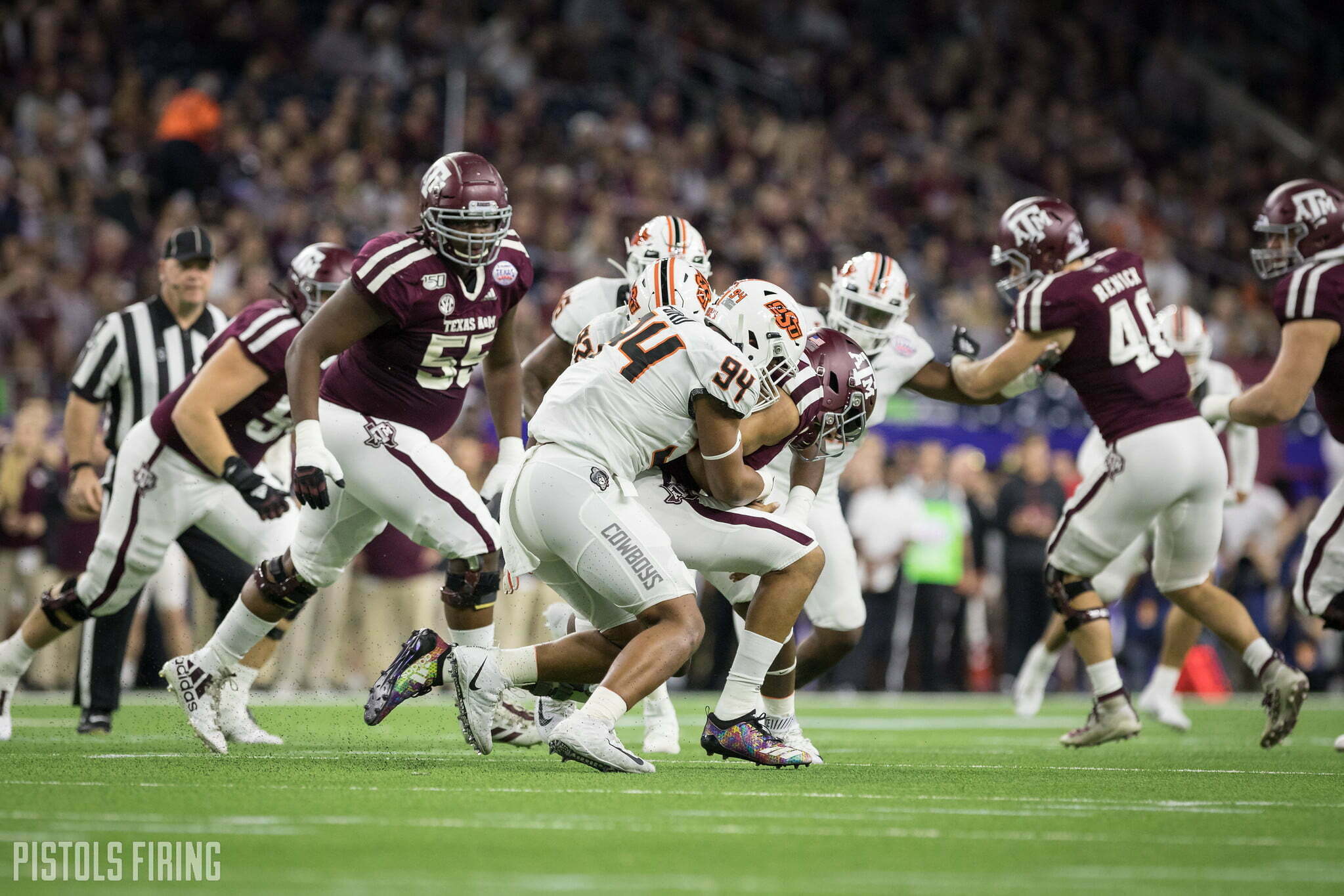 About a week ago, I wrote about the “NFL Guys” on Oklahoma State’s offense. This stemmed from a Mike Gundy quote on what teams need to win the Big 12.

“But to get to a point where you can potentially finish for a conference championship, you have to have NFL players on your roster. You have to get great quarterback play. We’re going to have a number of guys on our team next year that are good enough to play in the NFL.”

For this post, I’m going to take a look at the other side of the ball. Now, I realize there are talented players like Israel Antwine, Tre Sterling, Jarrick Bernard, Malcolm Rodriguez, Tyler Lacy, and plenty of young guys with a ton of skill on the roster. However, the four Cowboys below are the players I think can make it to the NFL and make an impact.

Ogbongbemiga will be entering his redshirt senior season for the Cowboys, and will look to man one of the starting linebacker spots for Jim Knowles’ defense again. The Canada product racked up 100 tackles, including 15.5 tackles for loss, five sacks, five quarterback hurries, an interception, a force fumble and a fumble recovery in 2019. This was good enough to earn him a second-team spot on the Coaches All-Big 12 team.

The Calgary native has been an absolute force in the middle of OSU’s defense. He’s a physical tackler who does a great job of fighting through blocks and making plays. Although, Ogbongbemiga’s athleticism may be overshadowed at times when he’s on the field with former safety and current linebacker Malcolm Rodriguez, this doesn’t mean he isn’t an athletic freak. You can see his speed showcased in the play below, sacking former OU quarterback Kyler Murray.

Player Comp – Kwon Alexander: Alexander and Ogbongemiga are both around the 6-1, 230-pound range and both are extremely talented athletes. The current 49er may have a little more straight line speed, but both players have great range in the open field and make plays in space. In addition, as I mentioned about Ogbonbemiga above, both guys use their hands very well to shed blockers and also do well in coverage. Finally, both players shine on the blitz, as shown in the previous video with Amen, and the clip below for Kwon.

Williams announced on January 11 that he would be returning for his redshirt senior season after there was some speculation he could make the leap to the NFL. The Louisiana native has been a long-time starter on the Cowboy defense, but next season he will no longer have his running mate A.J. Green. Green and Williams have been the primary cornerbacks for the Pokes over the past three seasons, and although Green was regarded as the more talented of the two, Williams has had a very impressive career so far in Stillwater.

The Cowboy DB has recorded 124 tackles, including 4.5 for loss, 24 passes defended and two interceptions (one shown below) over a span of three seasons for OSU.

Green seemed to have a little more top end speed than Williams, but the Shreveport product can hold his own in that department. He’s plays very aggressive and has excelled in both press-man and zone coverage. Williams has been tasked with guarding smaller quicker receivers, and he’s been able to stay with them, as well as not letting bigger, stronger receivers out muscle him.

Player Comp – Kyle Fuller: My comp for Williams is current Chicago Bear Kyle Fuller. Fuller came into the NFL with some question marks around his man coverage abilities. However, he has proven he can cover guys one-on-one and it shows through his consistent rankings at the top of Pro Football Focus’ top man coverage cornerback lists. In addition, Fuller and Williams both stand 6-0 and around 190 pounds. Both players also have great reaction time and are very aggressive breaking on the ball, as Fuller highlights in the following video.

Lastly, both players were long time starters in college, with Fuller logging 42 career starts at Virginia Tech, a number that Williams will exceed next season at OSU.

When I was writing my film breakdown of Trace Ford before the start of last season, I was really impressed by what I saw. However, I had no idea that he was going to be the talent he was in his true freshman season. He finished the year with 29 tackles, including four tackles for loss and three sacks, nine quarterback hurries, five pass breakups, an interception and a forced fumble. More than just OSU fans were impressed, as Ford earned a Coaches All-Big 12 Team Honorable Mention for his performance.

His combination of speed and athleticism gives him the ability to make plays like this.

These attributes allow Knowles to line Ford up all over the field, as I wrote about during last season. This includes allowing the 6-3, 227-pounder to drop back into pass coverage, something he’s shown he’s very capable of doing. The Oklahoma City product is also extremely physical and does a great job fighting through blocks. In just his first year on campus, Ford filled in admirably for former Poke Jordan Brailford in the “Leo” role, the defensive end/linebacker position in OSU’s defense.

Player Comp – Jamie Collins: In the Trace Ford film breakdown piece I linked above, I compared him to current Los Angeles Ram Dante Fowler. I still like that comp, but I’m going to go with one I think is a little more accurate in long-time New England Patriot Jamie Collins. Collins is also a super athletic guy who played quarterback and safety in high school, leading his team to a couple of state titles. During his time at Southern Miss, he played defensive end, linebacker and safety. He was primarily tasked with the defensive end/linebacker hybrid position, similar to Ford, and excelled at it due to his strength and speed.

Collins is a solid all around NFL player and displays this on a regular basis with plays like this.

Peel played a mixture of linebacker and safety in high school, but has really excelled at the “Bandit” or safety/linebacker hybrid position for the Cowboys. He had an absolutely outstanding season in 2019, recording 71 tackles (three tackles for loss and a sack), 13 pass breakups, five interceptions, two forced fumbles, two fumble recoveries and a QB hurry. The junior defensive back was named to the AP All-Big 12 first team and was one of the primary leaders on this OSU defense.

Peel is very comfortable anywhere he’s lined up on the field. Whether that be on a receiver, in zone coverage, up near the line of scrimmage or at a linebacker position, he is consistently making plays. Peel is a sure tackler in the open field, as he’s showed many times throughout his Cowboy career, including the play below.

The Texas native has what it takes to finish next season as an All-American and win some big time awards, and I personally think he’s going to do it.

Player Comp – Kenny Vaccaro: In a previous breakdown of Peel, I compared him to New England Patriot Patrick Chung. I still like this comparison, but after having another year of watching him play, I think I’m going to change from Chung to current Tennessee Titan Kenny Vaccaro. One again, the two share a similarity in size. Both guys share great strength for a defensive back, while also still having good speed. Both players use their physicality to their advantage and can come up and make big plays near the line of scrimmage, as Vaccaro shows below.