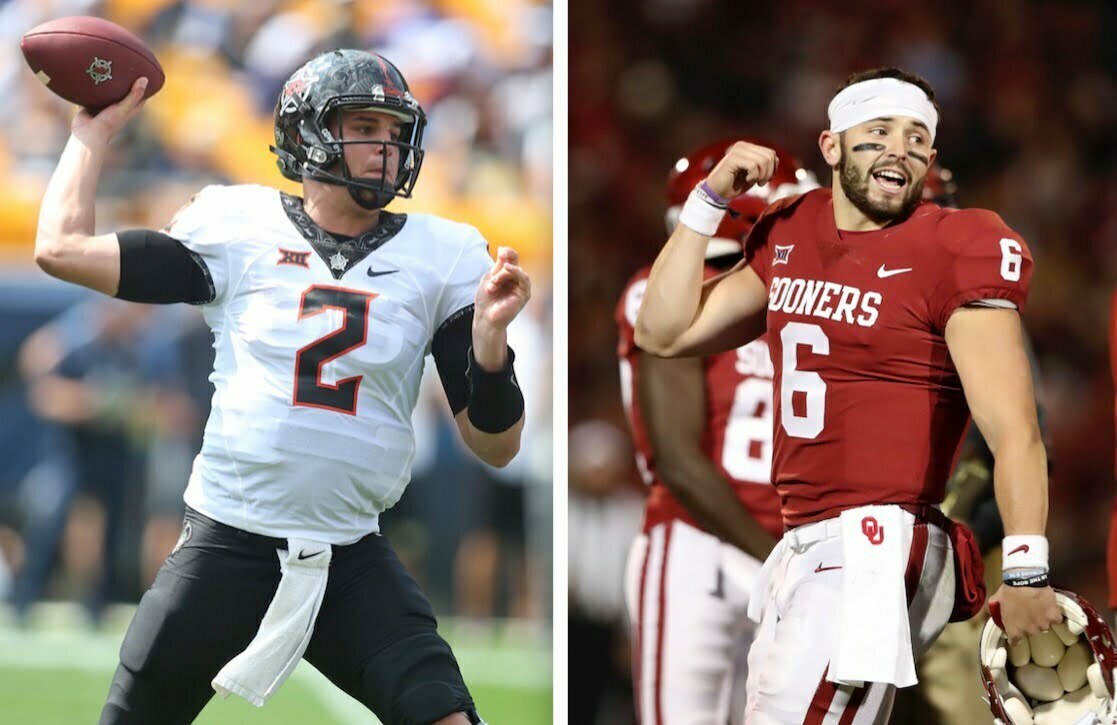 Baker Mayfield is the orb around which the entire OU universe swings. Without Baker, OU is a good team with a young coach and a middling defense. Somehow with him, they are everything. He is the rare rising tide that not only lifts all boats but outfits them with new navigation equipment and stocks the below-deck fridges while he’s at it.

His place within the college football world has long been cemented, too. He is A.J. Pierzynski with a little tummy showing. He’s Draymond Green with a face mask. If he wears your colors, you’ll die on his hill (and boy, has he marked all of his hills). If he doesn’t wear your colors, well, you guys read the comments section.

He has turned himself into an all-time great heel, and over and over again on the road, in some of the biggest stadiums in the country, he has delivered.

Four total TDs in a monster win at Tennessee back when Tennessee was kind of a thing in 2015. A 24/34 for 270 and 4 total TDs at Baylor in 2015 when Baylor was definitely a thing. Almost 550 yards at Tech last year. A Heisman performance in the Shoe in September. He’s easy to hate because of his antics and because he wears his cape around his head, but the song and dance travel, and that makes him easy to respect, too.

Saturday’s Bedlam game is about a lot of different things.

It’s about Mike Gundy’s unwillingness to coach like he has a mullet. It’s about Lincoln Riley’s first-ever in-state game as a head coach. It’s about Oklahoma State’s two-headed RB monster and OU’s one-headed monster at defensive end.

It’s about the Big 12 title race and it’s about revenge and affirmation and all these ephemeral qualities we assign to college athletes based on the outcome of 60 minutes of football. It’s about a fan base that’s been bat flipping conversations of a rivalry for the last half-century against a fan base that has to hold up two massive upsets in unimportant games as one of its greatest answers this century.

Most of all, though, it’s about The Villain and his foil.

A couple of the best to ever play at their respective schools — nearly 25,000 yards and 188 TDs worth of QBs will lace it up against each other on Saturday for the last time (probably). Six on one side. Two on the other. History waiting to be won.

It’s almost too perfect. I woke up on Friday thinking about this. It is every fairy tale plot in every book you have read your kids. The Hero and The Antihero do battle in a magnificently-set scene with something much bigger than themselves at stake. Hell, it’s every plot of every story ever. So often we try and shoehorn the narratives of each team’s players into this template. This one is actually true, though, because Baker is a willing heel, and Rudolph will play the other side, even if his steed is night black instead of pure white.

No quarterback has ever embodied what boils the orange blood of Oklahoma State fans more than Mayfield. Ever. It’s not even close. Making fun of Landry Jones and Sam Bradford felt callous and inauthentic. Making fun of Baker Mayfield is a sport, one he has helped create.

If Baker is the epicenter around which Sooner Nation swings, Rudolph is the still-thumping heart of a Cowboy team and group of fans that believe that this group, of all the hundreds of groups that have come through Stillwater, has a chance to deliver what only a handful have ever delivered: A conference title.

Rudolph is not as public with his swag, nor is he as brash with his rhetoric. But you can believe that behind closed doors, he is every bit the lightning rod for his top 15 squad that Mayfield is for his. Rudolph’s commanding, domineering presence in interviews and interactions reeks of somebody who has grown from a baby-faced teenager in Norman just three years ago into an adult on the precipice of the rest of his life.

The numbers are astounding. They will go down as two of the five most decorated QBs in Big 12 history (and that’s saying something). Mayfield is 29-5 at OU as a starter. Rudolph is 29-7 as a starter at OSU. Mason is 12-3* in Boone Pickens Stadium. Mayfield has never lost a true road game. The two combine for a 25-3 record in games like Saturday’s (Baker on the road, Mason at home).

Saturday of course has a chance to be an all-timer. Most Bedlams of late have been set up as exactly what you want from an in-state rivalry game. Big 12 title on the line. College Football Playoff dreams at stake. This one, though, is the culmination of several years of build-up. Baker’s last cook. Mason’s final shot at a Big 12 ring.

“It’s always important to take care of your rivalry games,” said Mayfield. “Around here it’s important to win the Texas game and the Oklahoma State game. Those are important ones. They mean a lot to a lot of people.”

Next year these teams will look so different. New QBs, probably multiple different coordinators. But for one final season each team’s exterior takes on the soul of its senior QB into this game. OU, its swaggy, finger-pointing record-setter who might be the best to ever do it in the history of that monumental program. OSU, its thunderous, comeback-leading offensive authoritarian who will leave his name all over the State record books.

And deep on Saturday afternoon with that Big 12 title trophy in the balance as BPS is overwhelmed with roars of all I do is win and the sun relents to a perfect November evening, Baker will wag his finger, and Mason will beat his chest, and we will watch one of the all-time great QB matchups in Bedlam history.

The Villain heads into yet another house that isn’t his looking to pillage and carry the spoils of another Bedlam win down I-35 by himself. His has already been a season fraught with controversy and breathtaking plunder.

This is what he does. This is who he is.

And no matter how you feel or have ever felt about Baker Mayfield, what is true now on November 3 was true two months ago and 10 and even 20 months ago. Oklahoma State’s path in 2017 to the Big 12 crown and anything that lay beyond that always ran through The Villain. He is the keeper of the trophy and the author of the back-to-back shirts. Now, you get him on your turf surrounded with your flags and your people.

This is his dream of course. He sticks himself with needles marked “chaos” and he lets it flow up and down his veins. He’ll get 60,000 in his dish on Saturday, and he will hear vile, obscene things. All in the name of Bedlam. It will be wonderful.

And now, after all of this, after three years of him and his games, running down Baker as he vies for a third consecutive Big 12 title could not be sweeter for OSU and its fans if Bob Bowlsby filled the dang trophy with Halloween candy. He started all of this in 2015, and now you get to end it. And nobody ever remembers the beginning of the movie.

This is why Baker is great for this sport and this rivalry. This is why the flag plant was so good. It was all pointing to this, this weekend. This game.

It was a precursor for what was to come.

Because beating Landry Jones in 2011 was fun, and it was a sigh of relief, for Gundy, for us all. But beating a fu-manchu-wearing Baker Mayfield in Stillwater after the performances he’s had against Oklahoma State and after the flag plant and after he rolled in 23 months ago and called himself the new sheriff of this place?

The Villain is coming.