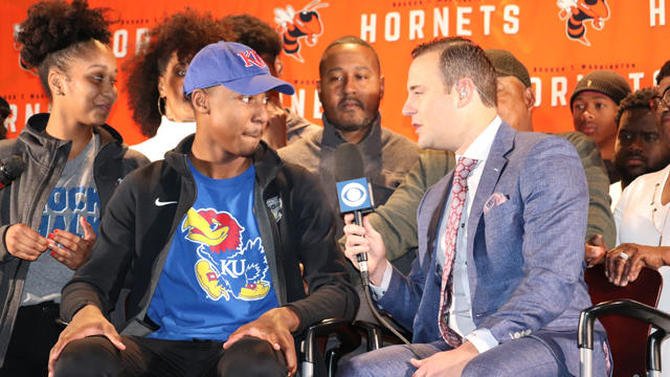 Bryce Thompson, the former five-star Tulsa talent who in 2019 committed to Kansas over Oklahoma State and several other top-tier suitors, announced on Thursday he is transferring to Oklahoma State.

Thompson spent the last season as a role player on KU’s guard-heavy roster, averaging 17.1 minutes per game while — off and on — dealing with nagging injuries between a back and a finger (the latter of which required surgery).

But a fresh start in Stillwater — and an opportunity to step in as a starter — helped the Pokes win out over OU and Tulsa. Here’s what it means for the good guys.

Between Avery Anderson, Isaac Likekele, Bryce Thompson and Rondel Walker, I do not envy the decision Mike Boynton has in deciding who starts and who does not in this backcourt. But book it: Bryce will be one. He’s more of a scoring guard than true lead guard, which does create some concern about who initiates the offense. But he’s one heckuva scoring guard. What he brings to the table as a true shot-creator for himself is pro-level stuff. I can envision Avery Anderson creating primarily by getting to the rack, and Bryce excelling in the mid-range, where he’s most comfortable. That likely means that Likekele gets the nod as the third backcourt starter, with Rondel coming off the bench. How many Big 12 teams have a Rondel coming off the bench?

Landing Cade Cunningham en route to him being a top-2 NBA Draft pick is going to unlock doors for OSU for years. Sending players to the pros matters. But landing Bryce, at least locally, is almost as big a deal as it relates to in-state affairs. Bryce is a domino. He was the star of Oklahoma Run PWP, which is always flush with talent, and which has produced the Boone twins for OSU. It keeps that pipeline open. But more than that — and I can’t say this enough — Bryce is a huge name. People know him. If he crushes at OSU in this new opportunity, players in the state will take notice. And if he uses this to launch his way to the NBA …. all of a sudden Boynton really has something.

In an offseason where more than 1,000 players have entered the transfer portal, OSU, incredibly, has mostly stayed intact. It lost Cade to the draft and Ferron Flavors to the portal, and Bryce Williams may well turn pro. But the majority of last year’s team is staying put, which means that with the addition of Bryce, OSU’s roster overhaul with three new transfer additions — Tyreek Smith, Woody Newton and Bryce — is nearly complete. We’re expecting OSU uses its final scholarship, but right now it’s unclear where that goes. I’m secretly hoping this 7-footer takes it.