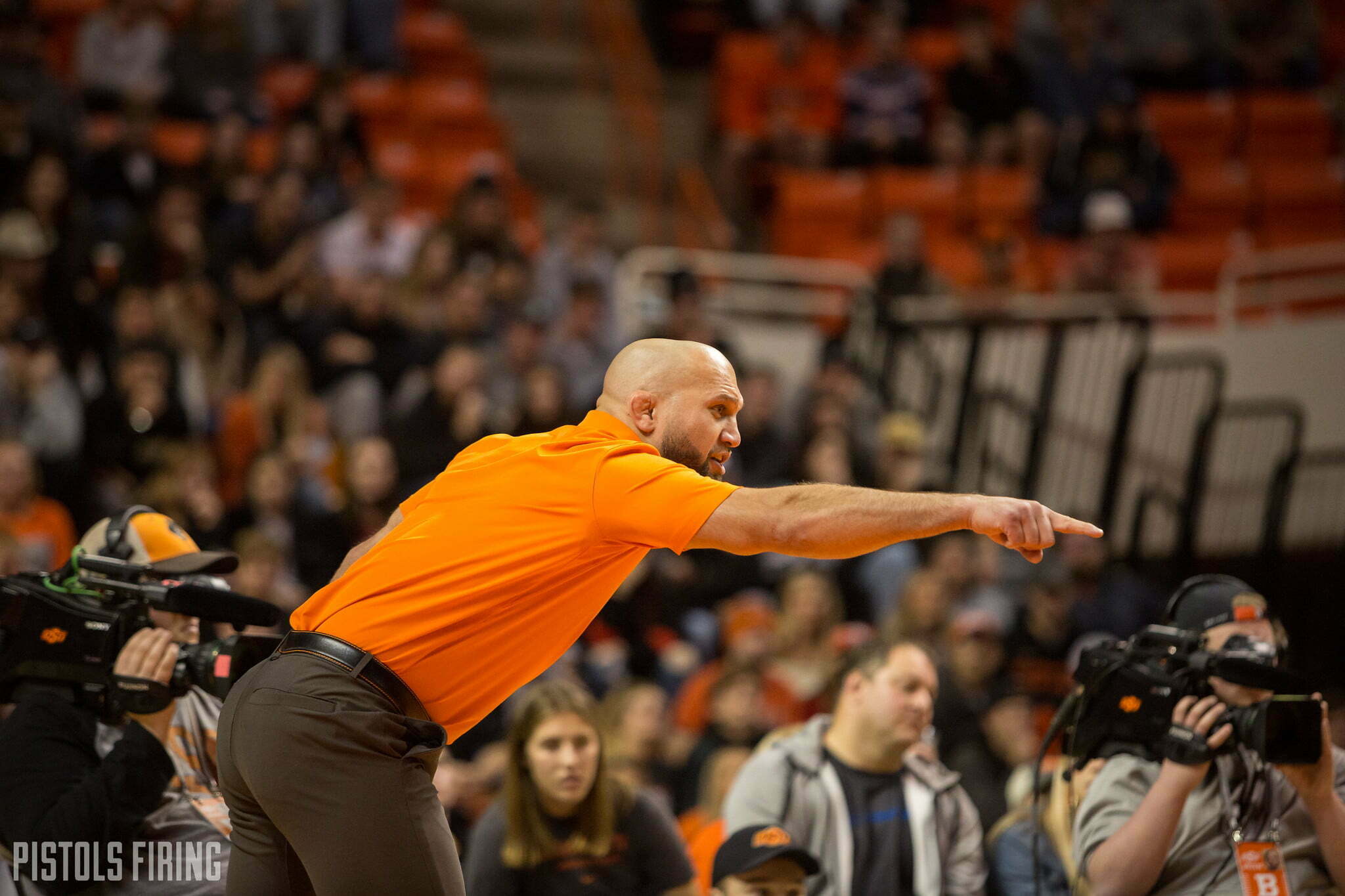 With things still a bit quiet on the sports front, I decided to go to Twitter and solicit some questions and see if I could possibly provide some answers for what people are wondering about OSU wrestling. Let’s dive in and take a look.

@TheGOATFollower: Is there actually smoke to Fix going 125!? WrestleStat just dropped him there.

There is definitely smoke. To about anyone that follows closely, it just makes a lot of sense. With Kaid Brock coming back for a sixth year after going 141 a few years ago, with two proven starters at 141 available in Dusty Hone and Kaden Gfeller, with other lower weights Reece Witcraft, Jakason Burks, and Trevor Mastrogiovanni, all having redshirts available, it just seems like it’s clearly the best lineup OSU could trot out. Even coming from a bunch of outside analysis.

That said, I’ve heard buzz that it is the plan from fellow insiders. But I’ve yet to speak with the Fix family or anyone on staff directly about it, so I can’t definitively say that it’s going to happen. Does it make sense? Yes. Are a lot of people saying and assuming it’s going to happen? Yes. Have I directly asked Derek, Tyler, Chris, Zack or John? No.

@soonersbigred: What is Fujita doing these days? Who is the biggest donor to the OSU wrestling program? Why did Guerrero really leave OSU? Is Isaac Jordan still around? How long do you think Smith will keep coaching?

A lot of questions to unpackage here and all from an OU fan interestingly. I’ll break them down piece by piece.

On Fujita, I actually have no idea what he’s up to. After watching “Finding Big Country” last week, maybe I could run something similar down. I know after college he returned to Japan and wrestled on a few of their National/Olympic teams up into the 1980’s, but I’ve never really seen much beyond that.

Who is the biggest donor to the OSU wrestling program?

Dollar for dollar, I don’t really know who specifically puts the most into wrestling. Meaning, I know who some of the more prominent wrestling donors are, but who gives the most to wrestling vs. football, basketball, etc… I can’t say for sure.

That said, two of OSU’s bigger donors that are wrestling people, are Chad Richison and Chad Clay. Clay is listed at No. 28 on the top 150 Posse list. I don’t know much of his background as it applies to wrestling, but do see a lot of wrestlers interact with him on social media and in other areas and know he has some ties there.

Chad Richison is a guy that wrestling people all across the state of Oklahoma should be aware of and should be very thankful for. He’s the founder and CEO of Paycom and No. 89 on OSU’s Posse Points list. He did not attend OSU — he actually wrestled for UCO in the 1990′ — but he, like many former wrestlers, attributes a lot of his success in life to lessons learned from the sport, and he gives back accordingly.

He donated a massive gift to UCO athletics a few years ago which allowed them to build what might be the best athletic facilities in the country for any D2 school, including a major renovation of their wrestling room. He also set up a fund last year where he offers payouts to high school wrestling coaches based on their team finishes at the state tournament. Again, I can’t know all of the ins and outs of where their donations go, but with Richison being such an avid wrestling guy, I assume most of his donations go directly to wrestling vs. any other areas of the athletic department.

Why did Guerrero really leave OSU?

With something like that you’re obviously never going to know all the specifics of what happened or was discussed behind the scenes, but the somewhat obvious answer is that OSU wasn’t winning with him.

From 2003-2006 the staff at Oklahoma State was untouchable. Of course John Smith has always been in charge but he, Mark Branch and Pat Smith made for a lethal combination during those years. The loss of those guys brought a bit of a dip in the program in recent years and they’ve not been able to get back on top since.

In a weird way, OSU was sort of a victim of their own success. Branch moved onto Wyoming and most of the other guys around the program at that time went into MMA or onto other coaching jobs and Guerrero and Esposito ended up as the two to stay in Stillwater.

The most common theme I’ve heard with Guerrero is he struggled connecting with recruits. You can somewhat clearly see that by just looking at OSU’s recruiting the last few years. While Guerrero was here, with the exception of Nick Piccinnini and Dean Heil, most of the big time recruits that OSU was able to pull in were all right in their backyard. Oklahoma kids and legacies like Daton Fix, Wyatt Sheets, Joe Smith, etc… It’s not always easy to recruit those guys(See Mark Perry for example) but it’s somewhat expected for them to wind up at OSU. At a program like OSU, recruiting should extend beyond what you have in your backyard.

Since OSU retooled their staff and brought in Tyler Caldwell, this has completely flipped. They got two big time guys in Travis Wittlake and Anthony Montalvo for 2018, they landed far and away the #1 class for 2020, and are on pace to get another #1 class for 2021. There’s still a bit of a “wait and see” on what the staff will do with all this talent they’re bringing in, but the improvement in recruiting has been remarkable.

Is Isaac Jordan still around?

No. Alex Dieringer was in his volunteer assistant role for a bit after he left, Alex has moved on to the Michigan RTC. The spot’s vacant now.

How long do you think Smith will keep coaching?

Wild guess, eight more years. I think he’ll see out the current recruiting classes and try to add a few NCAA titles with them. Then stay on for a few years as OSU transitions to whoever is taking over for him.

@GrappleCy: Any thoughts on how Olympic redshirt will shake out for the Cowboys this year?

No one from OSU will be taking one. We did an interview with Coach Smith a few months ago and I asked him about it. He said that Daton was the only one that it might make sense with and he really just didn’t think it is the best thing for Daton. The only two other wrestlers that are eligible for it are AJ Ferrari and Travis Wittlake.

@pawhuskapoke: Who will be at 197 next year? Dakota or AJ?

I think they go with Geer. I don’t know how it will go in the room, but I do think there’s a good chance that Ferrari could get the better of Geer in a head to head match. But do you burn the redshirt of Ferrari on Geer’s last year when you already have an All-American there? I personally don’t think you do.

@pawhuskapoke: What is the timeline for a new wrestling facility/RTC?

Before COVID-19 hit they were basically just looking for a donor, and I don’t think that has dramatically changed even with the virus. But… with everything currently going on in the world, Mike Holder and OSU are probably just more focused on keeping the athletic department held together than they are on building new facilities.

And potential donors probably aren’t ready to let loose of that much cash when we’re in a global pandemic. I think you have to hope that the potential donors that OSU has available navigate this pandemic successfully and if they do, once some of the smoke clears from it, hopefully we hear some news on a donation.

@lmao_wrestling: With a logjam of kids at the lighter weights (hone, gfeller, burks, daton, and witcraft, lewallen, mastro, and kaid) how do you see the lineup shaking out?

I discussed it in a write-up a few weeks ago. Best scenario and the one that makes the most sense to me is this

Let all the young guys take a redshirt then sort out another logjam in the 2021-2022 season.

Sorry if I didn’t get to anyone’s questions. I’ll try and do another one soon or maybe revisit and answer a few I missed in a week or so.