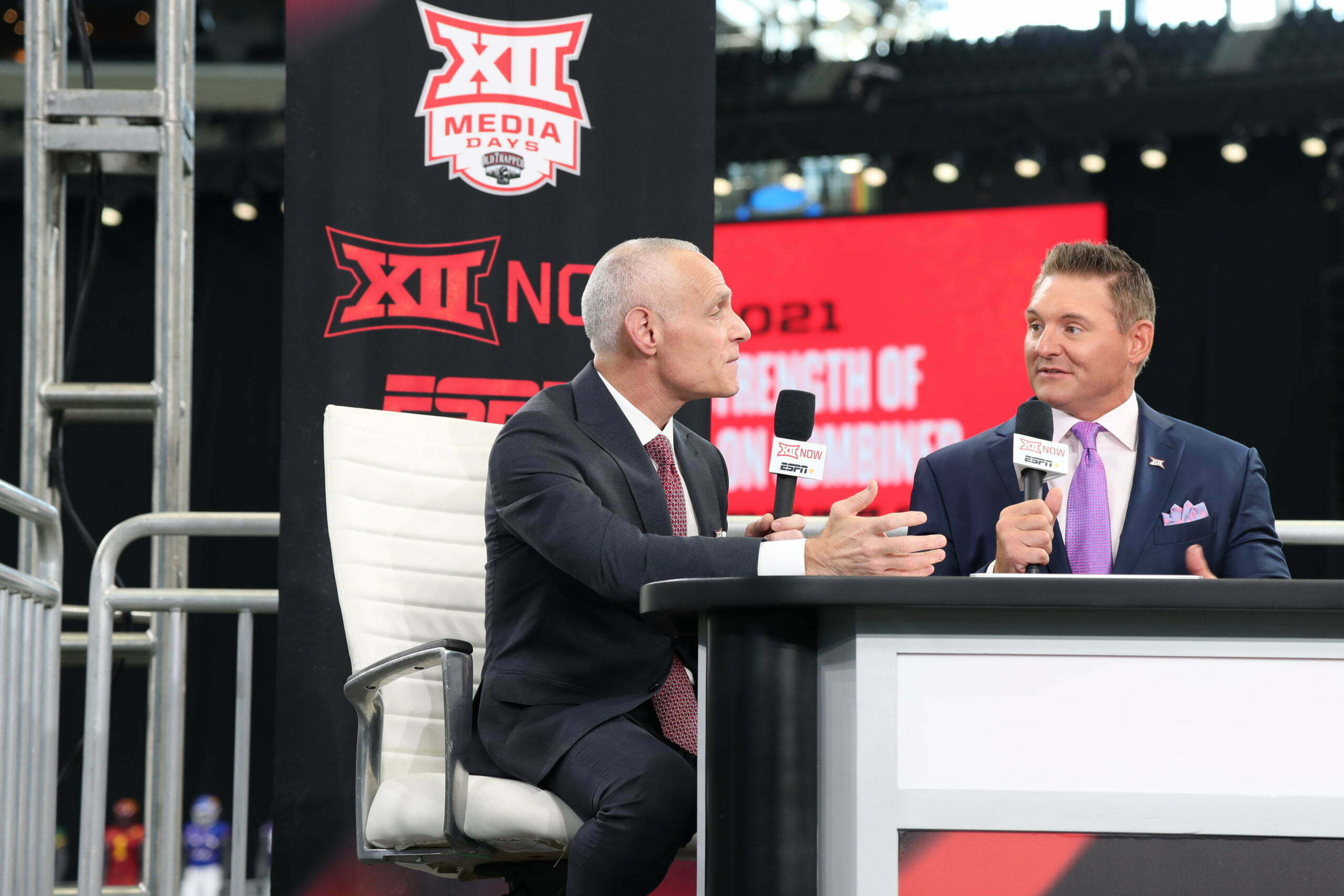 He talked plenty abut conference realignment and the Big 12’s potential role in it. But here are a few other topics Yormark hit on as he preps for his first official day on the job on Aug. 1.

Looking for a ‘Win-Win’ in OU-Texit

The two biggest brands, OU and Texas undoubtedly bring value to the conference, but with potential additions because of the USC/UCLA move to the Big Ten, there is a point of view that two lame duck schools could clutter things up. There is a hefty fee both schools could pay to leave for the SEC early, but the league and those schools could also work out a deal to expedite that process.

“In any situation like this, I always look for a win-win scenario,” Yormark said. “That being said, it’s important that whatever happens is in the best interest of this conference.”

Conference realignment is fun to increase on-field competition, but it really comes down to one thing — money.

With the Big 12’s media rights deal coming to an end after the 2024-25 school year, Yormark said maximizing the upcoming deal is the most important thing despite all the noise happening around it.

“One thing is crystal clear: There is no higher priority than to the best position the Big 12 for its upcoming multimedia rights negotiations,” Yormark said. “Everything we do must create momentum for these negotiations, as well as building the value of the Big 12 brand and business.”

As if realignment and media deals weren’t a big enough obstacles to traverse, NIL throws another wrinkle that conference commissioners are trying to figure out.

Since coming into effect last summer, NIL has expanded past a local restaurant paying a long-term quarterback to appear in a commercial. It has ballooned to be all about recruiting. Businesses (perhaps donors) are paying for recruits or transfers to go to a particular school.

Yormark seems like he has the potential to be an expert in the NIL space because of his time at Roc Nation, an intersection of sports and entertainment. Yormark said he is all for student-athletes making money, but, like many, he said some parameters need to be put in place.

“I can say at a high level, I’m an advocate of NIL,” Yormark said. “I’ve gotten my feet wet to some degree at Roc Nation, where we have been engaged with NIL.

“From a personal point of view, I have not really spoken to many of our key stakeholders about it. I think there needs to be guardrails. There probably needs to be uniformity. Maybe the conference needs to take a bigger role in what NIL looks like going forward. But I think, given my background, having spent so much time in the commercial space, I’m very well-suited for NIL in whatever form it takes on a go-forward basis.”

After learning about his thoughts on his new job and the variables surrounding it, it was time to find out about Brett Yormark the person.

In his younger years, he was apparently in a band.

“I used to be a drummer, believe it or not,” Yormark said. “I love music, and obviously I spent some time at Roc Nation, and I haven’t even kind of discussed that with my kids that often over the years.

“But I was a drummer, and my twin brother was a drummer, also, and we played in a band. I’m dating myself, but not many people know that, and maybe that’s where I developed my fondness for music, generally speaking. But I’d say that’s probably something that’s unexpected when people hear about it.”

Wait, so he was a drummer? And his brother was a drummer? For the same band? What band has two drummers? I didn’t know this topic existed entering the day, but I have more questions than answers leaving it.