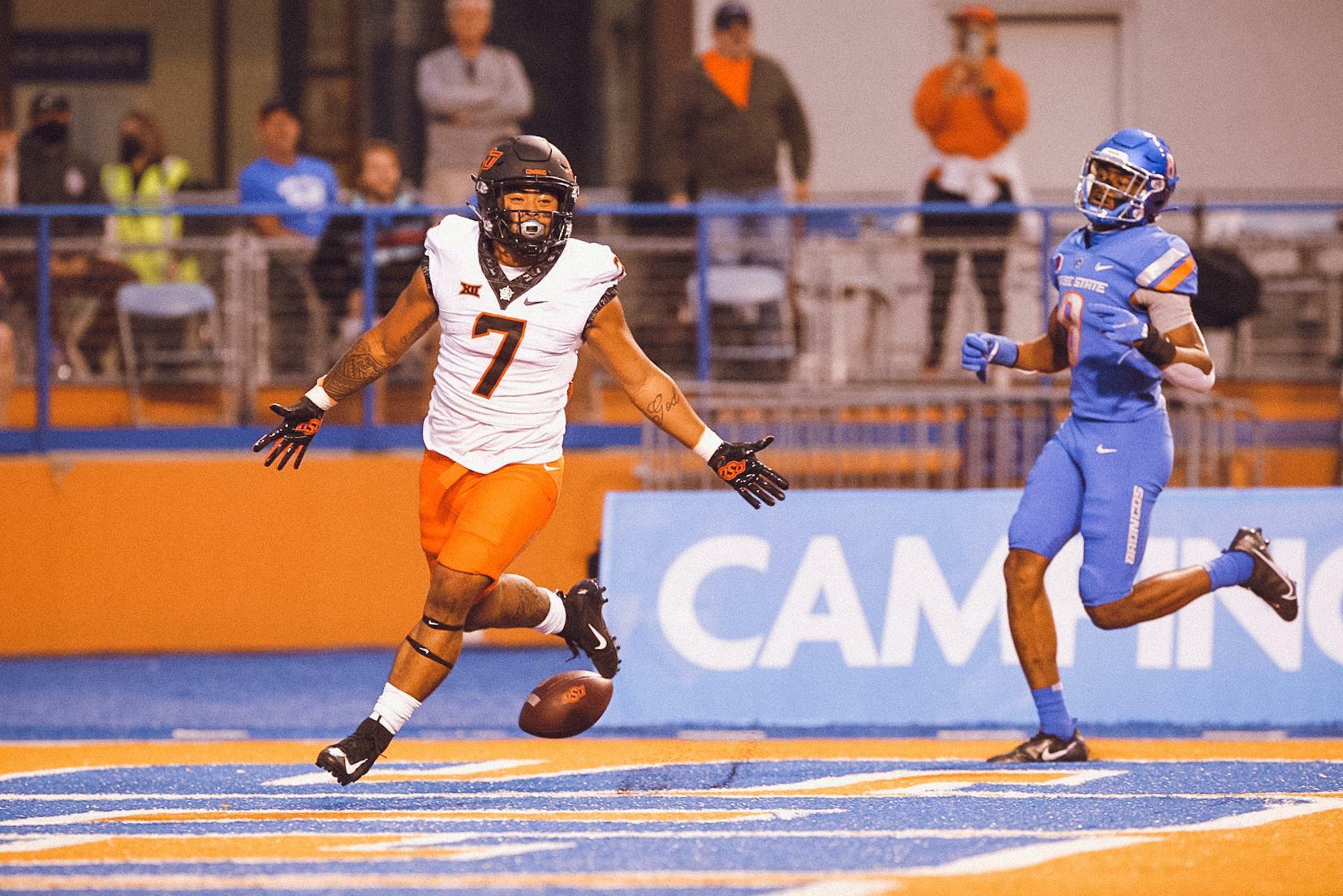 BOISE, Idaho — The Cowboys’ games seem to keep topping one another in terms of insanity.

Oklahoma State beat Boise State 21-20 on Saturday night to advance to 3-0 on the year. It might have been the craziest game since Central Michigan upset (or lost to, depending on who you ask) OSU in 2016. Here are 10 thoughts from the Smurf Turf.

1. OSU’s Backfield Is No Longer Four-Headed

Coming into the year, Mike Gundy said the ideal situation would be to split carries among Warren, LD Brown, Dezmon Jackson and Dominic Richardson. Gundy added that if a guy got hot, they’d continue to feed him. Well, after a pair of poor team running performances to start the season, there isn’t much of a need to further experiment, Warren works.

Kyle Boone dubbed him “Scorin’ Warren” this week, and he proved the nickname right with his two touchdowns against the Broncos including a 75-yard sprint that kept the Pokes from getting routed in the first quarter.

A Utah State transfer, Warren played as if he felt right at home on a Mountain West field, no matter its obscure color.

Against Missouri State, OSU running backs combined for 53 rushing yards. Against Tulsa, they combined for 87 rushing yards. Warren ran for 218 on Saturday, the 48th 200-yard game in program history. His low, but strong, center of gravity makes him a menace for taller defenders to bring him down, and he showed with the 75-yard house call he can hit the jets when needed.

I still think LD Brown, Dez Jackson (when he returns) and Dominic Richardson should still be a part of the offense because all have shown how good they can be, but through three games (and especially in Game 3) Warren has proved to be the guy.

2. The Ridiculous Ending That Game Deserved

Starting with the fumble, Warren was ruled down before Boise State scooped the ball up and ran in for a would-be go-ahead touchdown. Bronco fans are surely ticked about the initial ruling of him being down negating the touchdown, but Spencer Sanders perhaps had a tackle opportunity before pulling up when he heard the whistles.

Then in what could only be described as a makeup call, the officials called a roughing the passer on the Brock Martin sack to move the Broncos closer to a go-ahead score.

Then, Jason Taylor, who started for an out-for-the-season Tre Sterling, ends up getting three fingers on a would-be go-ahead field goal to give the Cowboys the ball back.

Then OSU runs some clock before chunking a contested fade pass to Cale Cabbiness, a redshirt freshman walk-on, to ice the game.

All of that happened in the final four minutes of an already wacky game.

In most of the first half, OSU was getting ran out of the potato state.

The Broncos were putting together long, impressive drives. Meanwhile, OSU had three-and-outs on four of its first five possessions with the only outlier being the one-play, 75-yard touchdown from Warren.

It felt as if OSU was getting beaten to a pulp, but the worst it got was 20-7, a two-score game.

Then thanks in large part to more Warren magic and a Malcolm Rodriguez forced fumble, OSU managed to go into halftime with its 21-20 lead despite having seven passing yards (seven!) and being 2-for-7 on third down.

“When we went in at halftime, I had to look at the scoreboard — I thought we were behind by 20,” Gundy said. “I just felt like we were behind by 20. I really didn’t think we did anything other than one long run. I didn’t think we slowed them down, and we didn’t function very well on offense. I looked on the scoreboard and we were ahead by 1, but it just didn’t feel that way.”

Kudos has to be given to the Cowboys defense who kept getting thrown right back on the field. It was a bend-but-don’t-break first half before a don’t-even-bend second half.

4. Third Down, Sanders Is Running

Spencer Sanders didn’t have a rushing attempt until the second quarter, and some of that felt like a bit of malpractice for the struggling Cowboys.

Nine of Sanders’ 15 rushing attempts came on third down (not including a third-down sack and a third-down kneel down). It was perhaps the most predictable thing OSU did all night offensively, which is wild considering just about every other play was a predictable handoff to Warren (but that was working).

Only two of Sanders’ rushing attempts came on first down (not including a first-down sack and the first-down kneel).

He had a few nice scampers, finishing with 40 rushing yards and a TD, but I don’t know that he was put in the best position to run.

This game reminded me of two somewhat recent OSU seasons.

In the beginning, it looked like 2014 where the offense’s best play was to hope for a pass interference call. That team needed a Bedlam miracle to become bowl eligible.

But in the end, it looked like the end of 2019, where Chuba Hubbard (Warren in the 2021 version) was dragging OSU to an 8-5 record with a Texas Bowl appearance. One of those teams finished with six regular season wins and the other finished with eight, so if OSU fans had to choose, I’m sure pounding the rock with a stud running back would be the answer.

There were times Saturday night where OSU resembled Army.

The Pokes finished with 57 rushing attempts to Sanders’ 13 pass attempts. The Cowboys completed six passes, the fewest they’ve had in a game since 2008. Sanders finished with just 87 yards through the air, the fewest he has had in a start apart from the Tulsa game last season where he played only two series.

7. There Was a Reason for a Limited Pass Game

The Cowboys traveled to Boise without Jaden Bray, Braydon Johnson and Tay Martin. On top of that, they were already missing Langston Anderson and Blaine Green. Green traveled with the team and took part in warmups but didn’t play.

Then during the game, Bryson Green suffered a hand injury, which is why Cabbiness got on the field in the first place. As far as scholarship receivers go, OSU might have more injured guys than healthy guys.

Kasey Dunn’s second season as OSU’s offensive coordinator has been polarizing at best throughout the fanbase. He said after the game they knew going in they were going to have to rely on their running game because of all of the receiver injuries. That’s a running game that averaged 97 yards a game in the first two.

There are calls like the third-and-long QB draw that seem predictive and inefficient, but this is far from a stacked hand Dunn has been dealt.

Like the little amount of passing, it’s also weird.

8. Did Hunter Woodard Just Make All the Difference?

OSU couldn’t run the ball for anything against an FCS team and a team that lost to an FCS team, but in their toughest test yet, all of a sudden the Cowboys combine for 246 rushing yards? What the heck changed? Hunter Woodard.

Woodard was supposed to be the Cowboys’ starting right guard all along, but injury kept him out of the Pokes’ first two games. He had his season debut Saturday, and all of a sudden OSU can run the ball.

Surely it’s not that simple. It’s not like Warren was solely running behind No. 70 all night, but the position group might finally have some stability. It was the third time in three games OSU had a different starting offensive line, but moving forward, it seems like this will be the intended group should injuries stay away.

The Cowboys’ O-line was put through the fire the past few weeks, something Woodard said he wanted to help turn around.

9. Hutton Has Two Rough Punts, but Was Nails Almost Everywhere Else

When OSU was in the midst of drowning in the first half, not even punting was going right.

Tom Hutton had back-to-back punts of 32 yards and 27 yards respectively, but he found his rhythm and ended up pinning Boise State insides its 20 on four occasions, and his second punt of the day went for a booming 55 yards.

In should be noted his struggling punts went into a stiff wind. On two occasions, he certainly didn’t help the Cowboys’ early struggles, but he was excellent outside of that.

10. This Is College Football

This is what makes college football more fun than the NFL to me.

That game was 3 hours and 11 minutes of insanity, and it took place on a blue field to top it off.

There were highs and lows, dazzling plays and controversy, and likely heroes and surprises. I plan on going further into detail with the Smurf Turf in a travel blog when I get back to Stillwater, but this is one of those games that will get brought up once or so every year because of how much fun it was.