It was much of what we expected (a rout) and a bit of what we didn’t (Daxx early…really early) but OSU is on the board with its first win of 2014 (the first win my son has ever seen!) and I have thoughts.

Not a “my gosh I might stay up all night writing about what I just saw” level of thoughts as was the case after the FSU game but thoughts nonetheless.

1. How you know OSU is a great program: The formula for beating a FBS school if you’re a FCS school is to somehow neutralize the depth and strength of the FBS school’s defensive line. You can throw enough skill-position athletes at a FBS school to make it competitive and if you have a good quarterback you can actually win.

The problem for Missouri State is that it controlled Oklahoma State’s defensive line about as well as the donut I ate this morning controlled me — that is, not at all.

And that’s why OSU is great these days — it’s been said a hundred different ways and will be again but not only can OSU hang with anybody in the country but it will beat the teams it should beat because of its front four.

2. We have a(nother) QB situation (kind of): I’m not sure fans will agree with this but Mike Gundy said after the game that JW Walsh is the starter against UTSA if he’s healthy.

Gundy said JW Walsh is the starter if healthy #okstate

The problem now is that you know Daxx is capable of at least opening things up. What happens if a healthy Walsh flips the Alex Cate switch out of the gate next weekend against a feisty UTSA squad?[1. The Cate switch was basically shoved to its natural apex today against Missouri State. Thankfully it was Missouri State.]

I think I actually agree with Gundy’s decision, though. Walsh looks horrific at times but he also played to within six of the champs last week and is 10-3 in his career in games in which he plays the majority of the snaps.

It’s pretty tough to bench that.

Lastly, I’m far from a JW homer but let’s be reasonable here. You don’t have to be a great thrower to be a great QB — Tim Tebow is the first name that comes to mind but it’s not like Zac Robinson was Warren Moon, either.

JW Walsh is not a good thrower. JW Walsh is a pretty good quarterback.

Daxx looked at least as good if not better than Chelf did last season — and Chelf was pretty freaking good for the second half of last season. I just don’t think Gundy fully trusts him — and why should he at this point? Here’s what he said after the game:

“I wish [Daxx] would have made some better throws at times but overall I thought he played pretty well for his first time.”

Here’s the thing…if you have a defense as immense as OSU’s seems to be you don’t need to roll the dice at QB (Gundy sees Daxx > Walsh as rolling the dice, I think) — you can afford to be conservative with Walsh and take your 8-4 or 9-3 season.

By the way, the next week of Gundy not talking about Walsh’s injury and us speculating harder than a man digging for gold flecks in California in the mid-1850s will be tremendous for the Internet as a whole. That’s the real winner in all of this, the Internet.

"The public will know it at the conclusion of eternity." RT @CodyStavenhagen: Gundy: "We'll know more about JW's situation tomorrow."

But it was also an early wakeup call that Yurcich and Co. are going to have to be incredibly creative in the ways they get him the ball. And he needs to get the ball a minimum of 15 times a game (he touched it 11 times against Missouri State).

5. Jimmy Bean might be as good as Emmanuel Ogbah: Bean had 1.5 sacks and just manhandled his counterpart in maroon and white.

If he and Ogbah trade off monstrous games like they have the first two weeks the Joe Bob Clements (the defensive line coach at OSU) is going to have to take out a restraining order on Glenn Spencer.

6. It was fun to watch the receivers be receivers: Here was the likely response among OSU receivers in their sideline huddle after they found out Daxx was coming in.

But really, it was terrific to see so many of the skill guys that make this offense crank get involved. I mean, look at this receptions chart (good afternoon, Brandon Sheperd!): 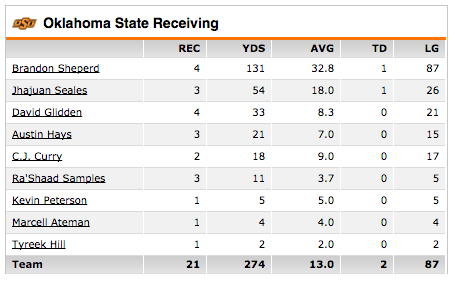 When the passing game is more viable OSU can do what Gundy actually wants it to do: run the ball.

7. The secondary was below average and that’s two weeks in a row: I really thought coming into the season that the OSU secondary would be pretty good. Yes, they’re young and inexperienced but with Kevin Peterson anchoring things it felt like they would at least be solid.

If it wasn’t for that big-boy DL this thing could have been Nebraska-McNeese levels of scary late in the game.

8. I love Rennis Childs: Maybe I’m alone in this but I told Carson last week that I felt like he gave you 80 percent or maybe 85 percent of what Tyreek did in the backfield.

With the added bonus that you don’t have to worry about overworking The Freek and Childs becomes an even more attractive option. This offense is just so complete in so many ways, it’s too bad the QB situation is the way it is.

9. QB debuts: Here’s how the first games in which each of the last six QBs at OSU have “debuted.” Yes, these are up for debate but I picked the non-Savannah State games in which they played for the majority.

I think Daxx is probably Chelf 2.0 actually with a little less speed and a little more arm.

10. These games always kind of suck: Not to put a damper on this whole deal because there really were a lot of interesting things that happened today but what did we actually learn?

I know avenging the Library Fountain Incident of 2014 will go down in the annals of the 2014 Redskin yearbook in a manner that the 2099 version of me will think he struck oil when he finds it, but I slogged through the second half of this one.

Next week, despite playing a team with only letters in the most common form of its name, will be far more fascinating. UTSA gave Arizona all it wanted on Thursday night and will have 10 days to prepare for either a semi-wounded Walsh or a “getting his first big start” Daxx.

That’s certainly a bigger game than it felt like three months ago.