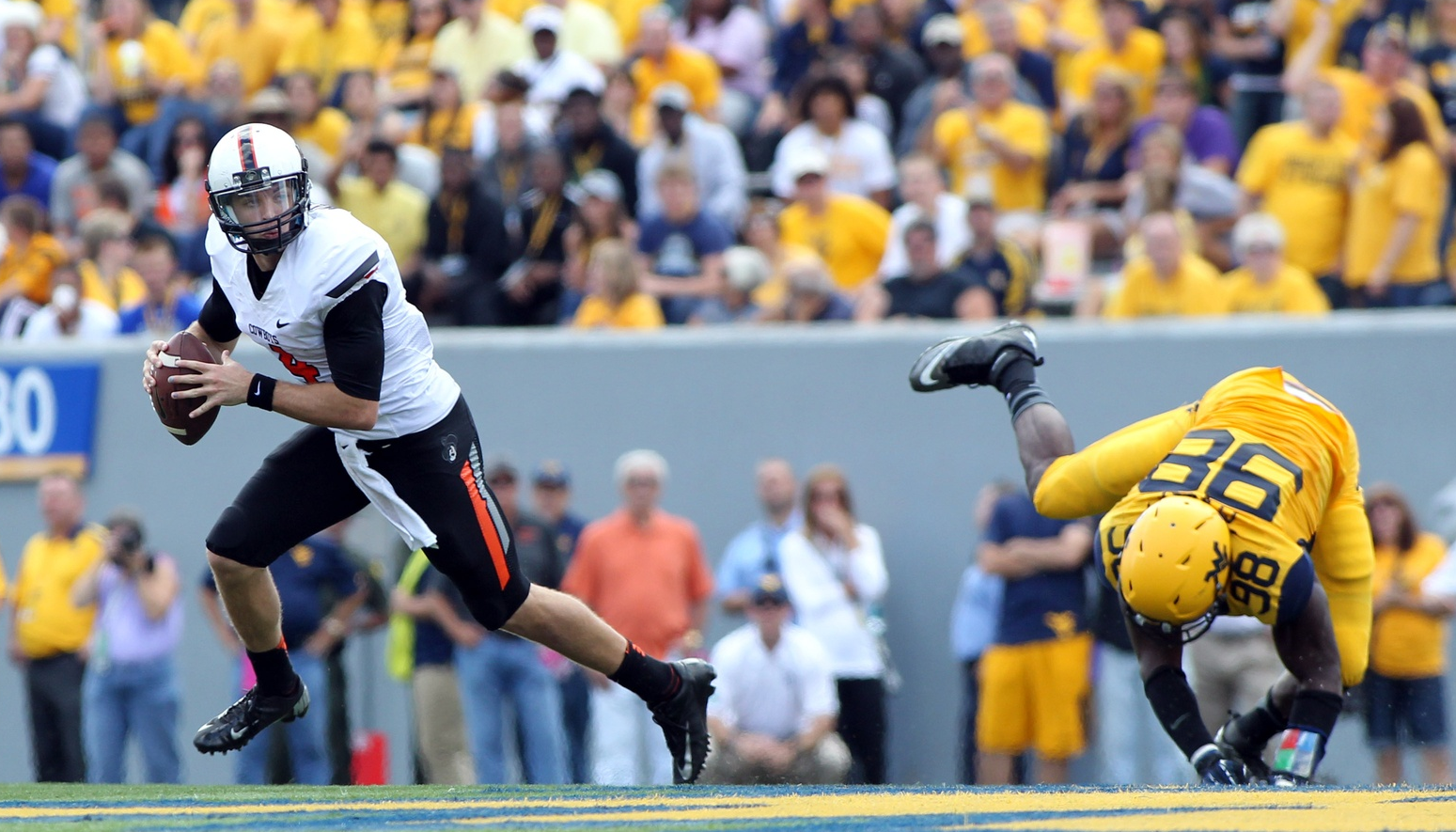 I don’t even know where to start — not because there wasn’t anything going on but because I could pick one of about 292 places and each would be a legitimate place to use as a talking point for how or why OSU lost this game.

1. Mike Yurcich, JW Walsh, dropped passes by everyone, the kicking game, Jeremy Smith. All of them, on some level, deserve blame. But let’s go big picture and start here here…

That is, in a word, pathetic. You aren’t going to beat Kansas by scoring three times in 19 possessions. Josh Stewart buoyed this team for most of the game, too. He had seven for 127 and a TD and 12x as many rushing yards as Jeremy Smith. If it wasn’t for him, OSU might have gotten beat by two TDs.

This OSU team was never going 12-0 — if you thought that you were (and probably are) delusional — and at No. 11 I thought it was a little bit overrated. But it’s not as bad as it played today. It’s an above average team that played a very poor game. As a fan, sometimes that’s the most frustrating kind of team to root for.

3. Speaking of Twitter…my gosh, you guys are out of your minds. People calling for Walsh’s head three possessions into the game. People wanting to pull Jeremy Smith’s scholarship. People wanting to ship Yurcich back to Shippensburg. Make rational statements about the game you’re watching.

I know we all struggle to not project entire seasons and careers based on single games (and even single plays!) but let’s be better than OU fans.

4. Back to the blame game. I think Yurcich and the offensive line deserve the most blame. As an offensive coordinator you have to put your guys in a position to do things they’re really good at. If JW Walsh is really good at throwing goal-line fades to Tracy Moore, I’m unaware of it.

Also, if Jeremy Smith is good at running directly at the sidelines for up to eight yards and then trying to turn the ball upfield, I’m also unaware of this. I think all 15 of Smith’s carries (for one yard, by the way) were one of two plays. And Yurcich kept going to a dry well. At first it was like “hmm, this is weird” but by the 4th quarter it escalated to “WTF ARE WE DOING, THIS IS NOT A TEST ANYMORE, THIS FIRE DRILL IS NOT A TEST!”

Walsh had no time to make decisions, either. The OL was a complete sieve for the majority of the game. I think we get so used to that being one of the most solid pieces of the offensive puzzle that we forget it’s not a foregone conclusion. Smith averaging 2.4 inches per carry today was all kinds of sad but his buddies up front weren’t doing much to solve that.

5. And on that goal line fade to Moore, in retrospect, that was the ballgame. You have first and goal on the five and you can’t punch it in to take a four-point lead and THEN you miss a chip shot to get within one. That’s sad, people. It was also a microcosm for this game.

I told Gideon on the Sports Animal this morning that West Virginia’s defense was underrated and that I thought the Cowboys would jump out in front with its own D. I didn’t, however, explain that OSU’s offense would inexplicably be more incapable of moving the ball on offense than Purdue was in the Heart of Dallas Bowl last season.

6. This team feels a lot like the 2008 team but with a halfway decent defense. Good skill position players, above average running QB but there’s not that special swagger there. It’s weird, like they should be better but for some reason aren’t. The 2010 and 2011 teams knew they were going to score on you. This team looks like it kind of, sort of hopes it scores on you and if it doesn’t it gives its defense a bunch of high fives and tells them they hope they do a good job and stop the other team’s offense with much force.

In a word: They’re too nice. I want to see Josh Stewart do a throat slash at the KSU sideline next weekend after a 30-yard score or just…something. Do something that makes me think you don’t care what the other team does, you’re going to score. Because it does not feel like that at all right now.

7. It really felt like after OSU scored four minutes into the second half that the game had flipped. You could see it coming — a 60-yard run from Walsh, a pick-six from Shaun Lewis, a couple of field goals, Stewart with a 40-yard TD catch, but then none of it transpired. OSU failed to score in the final 19 minutes of the game.

One last note on Yurcich: He called a bad game, yes but let’s not bury him one game into the conference schedule. Would I rather have Holgorsen calling plays? Sure. Would I rather have Monken calling plays? Hell yes. But I can’t listen to the rationale of wanting to can a dude 60 minutes into the real schedule. Does he have the goods? Maybe not, but let’s let him show us first.

8. How much fun are football games infused with Dana Holgorsen? The Dana Effect was on full display Saturday, too. The Red Bull, the f-bombs, the flying headsets, the “I don’t care if the smart play is to run out the string right here, I’m absolutely going to try and run it up on my old squad at the end of the game” offensive playcalling.

It was spectacular. Also, this happened!

And this made me laugh.

How wild will the #WVU coaches after party be? Holgy & Defo about to get loose!!! #hookers #redbull #vodka

9. Not sure where OSU’s 1.1 points per drive ranks on the all-time worst list (paging OKC Dave) but this drive chart is what 6-6 seasons are made of: 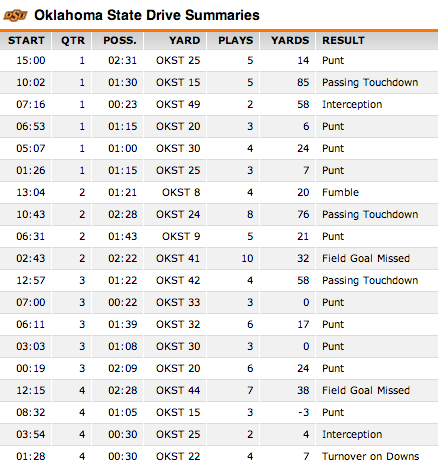 10. The special teams in this game were NSFW.[1. Not Safe For Work for you less Internet-savvy among you.] Kip Smith had punts of 13 AND 16 yards and Ben Grogan missed two field goals including a 23-yarder. In Smith’s defense, when he was recruited, the words “you will get to punt 10 times in a game all the time” were likely never uttered.

11. Everything I think about this game keeps going back to Walsh. He wasn’t good, certainly, but are giving him too much of the blame for all those dropped balls? Or were they just poorly thrown and receivers were trying to make out-of-their-minds plays to even get a hand on them? I’m honestly asking because I wasn’t on the field and it was tough to tell on TV.

I’ve been saying for two years I don’t really think Walsh is a dude you can ride to the Big 12 title. That’s fine that Gundy wants to roll with him — and I think it’s silly to flip back to Chelf at this point — but days like today are part of the Walsh Experience.

Those floaters he threw against Iowa State last year? Those got picked today — or they were incompletions. He’s a good player (I think) but I’m pretty sure he’s not the QB of a top 10-caliber team. Now, the Big 12 is so topsy-turvy this year that sure, OSU could squeeze a Big 12 title out of him (I think) but 2013 is an anomaly, not the norm.

10 more thoughts tomorrow along with an inforgraphic box score and some superlatives.

Also, some GIFs for you…