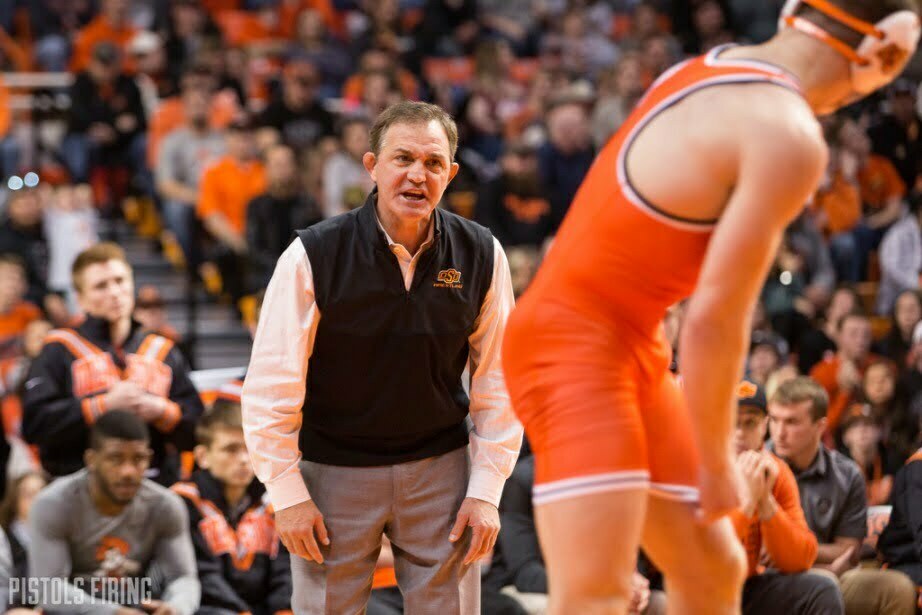 I decided to put together a two-part recruiting piece on where OSU is in recruiting currently. We’ll look at some potential 2020 guys tomorrow, but here’s a look at the current team, the 2018 class (which has already signed), the 2019 potential class, and how it will all mesh together in future years.

Right now OSU is stacked to the deck at the lower weights. At this point, I have a hard time seeing how at least one All-American caliber wrestler will not be left out of the lineup next year. Great thing is it’s a young group. Nick Piccinnini, Kaid Brock, Joe Smith and Boo Lewallen are just sophomores, Daton Fix and Kaden Gfeller are true freshman. Because of that there are very few recruiting needs for the Cowboys at the lower weights in the immediate future.

The Cowboys have already signed their 2018 class. It features no lower weights as they currently aren’t needed, but Travis Wittlake is a world medalist and superstar recruit that you can expect to win multiple NCAA titles. He’ll likely be a 174-184 in college.

I’ve had the opportunity to watch Anthony Montalvo a lot on Flo and have been impressed.  He projects as a 184, but told us in an interview he’s pretty flexible with moving weights up or down if needed. Also, even when the group of upperweights we listed above graduate in 2019 OSU will still have Keegan Moore and Andrew Marsden who are currently underclassmen. So with the exception of heavyweight, most of the needs are filled by signees.

For the 2019 class, OSU fills the gap at heavyweight with another commit that will be hard to miss on. Daniel Kerkvliet is a world champion that will be OSU’s heavyweight for the foreseeable future and is expected to be a really good one. He’ll be a true freshman the year after Derek White graduates and likely plugs in immediately as the starter.

So with the 2019 class you maybe want a few mid-lower weights to have redshirt and come in behind Brock/Lewallen/Piccinnini and a 157-165 type for Joe Smith along with potentially a 197. None are desperate needs, you still have Fix/Gfeller for a while, but you prefer some bodies at the lower weights in this class as much as anything.

Scholarships with wrestling are really tricky because the money is so limited. Unfortunately the need in the 2019 class is a few lower weights, and there aren’t a ton of big names nationally that it’s really easy to see OSU getting in on.

I say that mainly because there aren’t many local kids that are highly ranked, and naturally who you look at as OSU having a clear tie to. It’s a much different story for 2020, and I’ll touch on that later in the week. It’s still OSU wrestling, though, and that carries a ton of weight with national kids.

Also if you haven’t noticed, Tyler Caldwell is doing an incredible job in his new role as the recruiting coordinator. Within the first few months of staff changes the Cowboys flipped two world medalists from Big Ten schools! It wouldn’t shock me for him to pull off one more here, but it’s tough to know on these national guys who OSU is in on.

There are a few notable names at the lower weights that still have not committed for 2019. Kurt McHenry is probably the biggest. He was a Cadet World champion alongside Greg Kerkvliet, and also a champ on a team with Travis Wittlake, so there are some connections there that could bring him in. Also, an opportunity to work with Daton Fix is a big selling point. This kid will get a lot of offers, so it’ll be tough. When looking at it previously I didn’t give this one much of a chance, but after putting together some of the connections, I could see OSU having a shot here.

I am holding out some hope that assistant coach Zack Esposito’s Blair Academy connections could possibly help bring in Chris Cannon or Michael Colaiocco. Coach Esposito went to high school at Blair Academy. These are two high school juniors that have yet to make college commitments and would be a huge boost at the lower weights for the Cowboys.

I’m not aware of any visits, and they don’t indicate much with there social media, but Blair does come to the Geary tournament in Oklahoma, they’re two of very few uncommitted juniors, and are around the size the Cowboys need. They’d fit well plugging in after a redshirt year when Brock and Piccinnini graduate.

A few other names nationally I’d throw out that I think OSU is at least “looking at,” not necessarily making big offers, but at least giving a look are Ridge Lovett out of Idaho and maybe Tyler Deen who goes to high school with Anthony Montalvo.

You might see some others come up that I’m not really following, but as a whole what’s available. Nationally, outside of McHenry, the Blair kids, Lovett, and a few others, there’s not much that jumps out at you as being drastically better than anything local and worth gambling much scholarship money on.

I wrote the other day that there are some NEO guys that I think could plug in some of those holes. I do think that will happen and OSU will pick up a few of these guys. There are a few of them that could be great supplements to the OSU lineup.

I think Colt Newton out of Choctaw may be a lighterweight guy OSU tries to get here. He’s not a big national recruit or anything, but he’s the right size and probably the best wrestler in the state at the lower weights. He has been on official visits here. Riley Weir out of Sand Springs is another that’s similar.

We wrote a while back about some recruiting that Chris Perry tweeted about and discussed on the coaches show. He didn’t give extremely specific direction as to who he was looking at in the Ironman Tournament, but did indicate he liked getting to see how local kids do in these big tournament, so I think the Cowboys are definitely interested in Zach Marcheselli out of Broken Arrow as Zach was one of the only guys out of Oklahoma seeded in the tournament.

They also follow Zach on social media and other things that indicate there is some interest there. Zach’s ranked in the top 20 of his weight class and would project as a college 197 which could help plug the hole for the Cowboys at 197 when Marsden and Weigel graduate. I do think whatever they offer Marcheselli may be a little light, and I’ll explain why in the second part of this tomorrow.

I would project for OSU to shoot for and possibly get maybe one big name national recruit for that 2019 class besides Kerkvliet. I don’t know who it will be, but the top of the wish list are probably Mchenry, Cannon, and Colaiocco.

Every immediate need is currently filled with what OSU has committed. They’ll definitely at least sign a few guys, but it may just be Kerkvliet and some local kids or somewhat unheralded recruits. Don’t be shocked if they get a big national name though, also don’t be too concerned because I think 2020 will be very promising and will elaborate on why tomorrow.