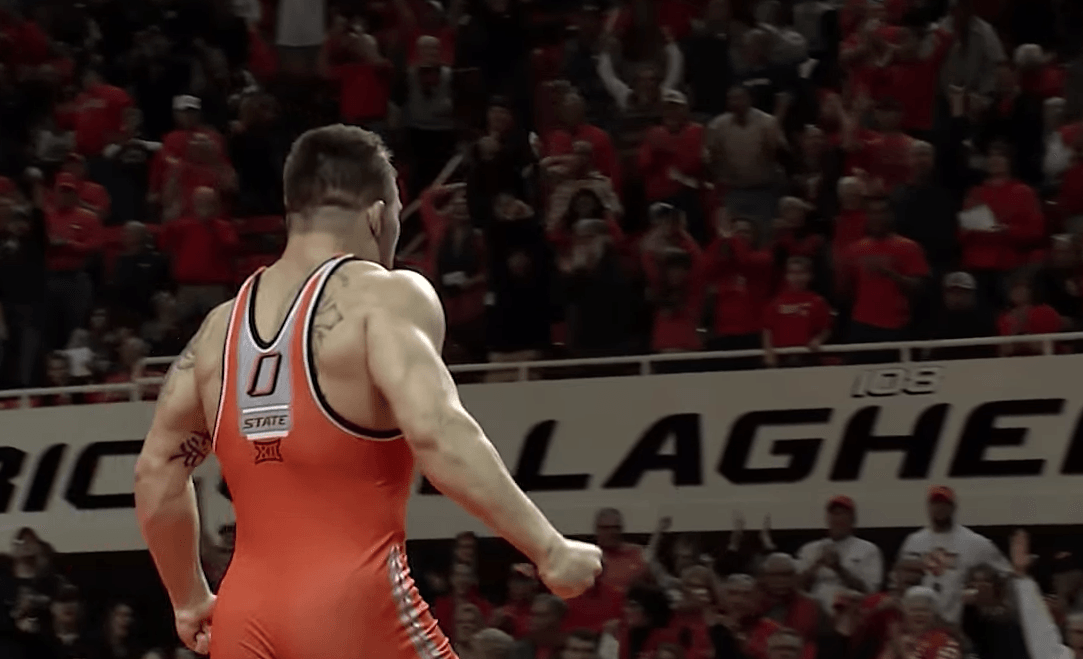 Kyle Crutchmer won his match vs. Penn State earlier this year. (Via YouTube)

Earlier this week, we looked at the first six weight classes at the NCAA Wrestling Championship. Today, we’re going to look at the final four as the tournament gets underway on Thursday in St. Louis.

174 is a sort of hybrid between a weight that has a heavy favorite and one that is wide open. Robert Kokesh (Nebraska) enters as the 1-seed and the favorite to take home the title.

Kokesh is undefeated on the year meaning he has beaten very good wrestlers in the Big Ten, including: Mike Evans (Iowa), Matt Brown (Penn State), and Logan Storley (Minnesota).

If Kokesh happens to go down early, then it is anyone’s game. There are quite a few 174-pounders who are pretty even as far as ability goes, so this is another weight that will be a lot of fun to watch.

I didn’t mention Kyle Crutchmer in the overall preview because I wanted to focus a little more on him here. Crutchmer is 19-6 on the season, and is a very interesting guy to watch entering as the 12-seed.

Nearly all of his matches, even the losses, are extremely close. If you watched the Penn State dual then you saw him take Matt Brown, the two-seed, down to the wire in overtime before eventually losing.

Crutchmer is 4-4 against ranked opponents, but like I said he is always in the match. I really think he has a shot to do some damage in the tournament, especially with the road he has to take.

He’s wrestling really well right now so look for him to take out some higher-ranked guys before finishing as an All-American.

Gabe Dean is 39-2 on the season. (Via WrestlersAreWarriors.com)

This weight is filled with a lot of guys who aren’t in the college wrestling spotlight, but they certainly get things done.

Guys like Max Thomusseit (Pittsburgh), Blake Stauffer (Arizona State), and Jack Dechow (Old Dominion) have a shot at taking out Dean if given the chance.

Dean lost to Taylor Meeks (Oregon State) and Hayden Zillmer (North Dakota State) earlier this season, so those are also a few guys to look out for. I really don’t see a whole lot of upsets happening at this weight, but it is the NCAAs so who knows.

Nolan Boyd is the Cowboy at this weight, and enters the tournament as the 12-seed with an overall record of 26-7.

Boyd has been solid in his first season as a full-time starter for the Pokes. He went on a run around the midway mark that began to turn some heads, but lost a few matches that he probably shouldn’t have not too long after.

Boyd is very dangerous from several positions, so he has the ability to catch some higher-ranked guys in bad positions.

197 pounds is the only weight at which Cowboys did not qualify a wrestler. J’Den Cox (Missouri) enters as the 1-seed with an overall record of 33-0.

This weight seems to be shaping up as a battle between the top-four seeds: J’Den Cox, Morgan McIntosh (Penn State), Kyven Gadson (Iowa State), and Kyle Snyder (Ohio State). Cox probably has the upper hand over these other wrestlers, but they are certainly the ones that can test him the most.

Cox beat McIntosh 2-1 earlier this season in the semifinals of the Southern Scuffle, and went on to beat Conner Hartmann (Duke) in the finals. Cox is a very big and physical wrestler, but also has the speed to counter almost anyone.

This year’s HWT bracket seems to be exciting, at least on paper. Nick Gwiazdowski (North Carolina State) enters as the 1-seed and has an undefeated record of 30-0 on the season.

He is also the returning champ from last year, having beaten Tony Nelson of Minnesota. Michael McMullan (Northwestern), Bobby Telford (Iowa), and Adam Coon (Michigan) are some guys who are sure to factor into the title match. This fellow from NC State has not lost this season.

Gwiazdowski has already beaten several of the guys he could face on his way to the title, including: Devin Mellon (Missouri), Joe Stolfi (Bucknell), and Ty Walz (Virginia Tech).

You were probably wondering where Austin Marsden factors into all of this. Marsden enters as the 4-seed with an overall record of 26-2, with his only two losses coming to Telford and Gwiazdowski.

There is no doubt that Marsden can hang with, and beat, anyone in the country. If all goes according to planned, Marsden would meet up with Gwiazdowski in the semifinals.

Marsden lost the first time they met by a score of 4-1 in a match that Gwiazdowski controlled most of the way.

In short, anything short of an All-American finish would be a disappointment for Marsden.