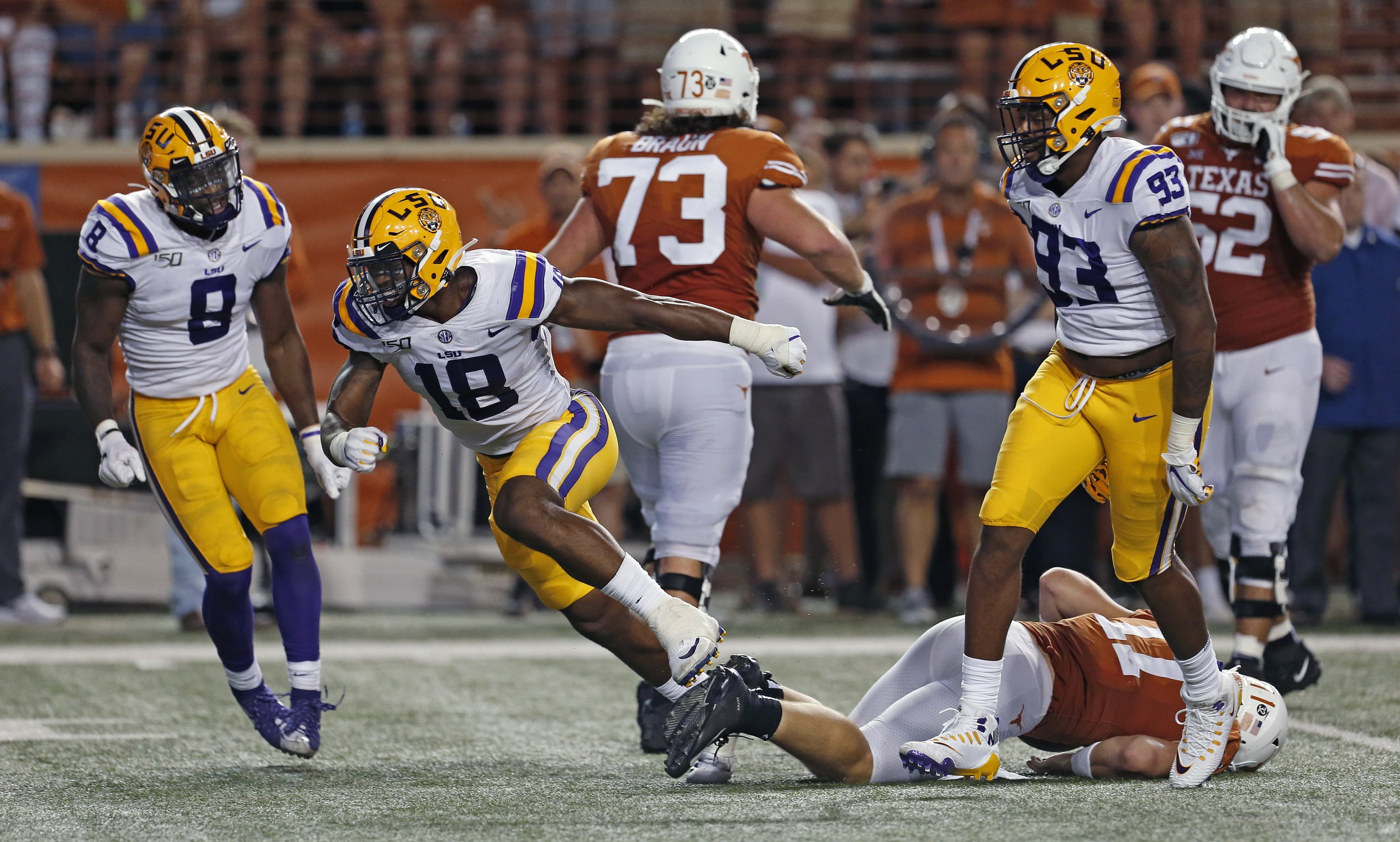 There was a top-10 battle, and the Big 12’s stable of dark horses built upon impressive first weeks. Here is a look around the Big 12 at Saturday’s games.

These teams combined to score 39 points in the fourth quarter, but Collin Johnson narrowly missed an onside kick in the final minute that allowed LSU to ice the game.

There’s no certainty Texas would’ve been able to march down the field and score, but it has to hurt the Longhorn faithful with how close this was:

Collin Johnson was *this* close to recovering the onside kick for Texas pic.twitter.com/qLD6b7MMwk

UT’s Cameron Dicker made a 47-yard field goal with just under four minutes to go to put the Longhorns within a score. The Texas defense forced LSU into a third-and-17 with two and a half minutes to go, when this happened:

On 3rd-and-17 in the 4th quarter, Joe Burrow and Justin Jefferson did THIS. pic.twitter.com/uf95gKNdAp

Texas answered with a 17-yard touchdown pass from Sam Ehlinger before the unsuccessful onside kick.

It was a heavyweight pride fight between Ehlinger and LSU quarterback Joe Burrow. Burrow went 31-for-39 for 471 yards, four touchdowns and an interception. Ehlinger threw for 401 yards and four scores while rushing for 60 yards and another touchdown.

The Longhorns play Rice in NRG Stadium next weekend.

There wasn’t much of a game in Norman on Saturday.

Jalen Hurts, Tanner Mordecai and Spencer Rattler combined to go 24-for-30 for 423 yards and six touchdowns, all going to different receivers. Hurts did most of that damage in a little over two quarters.

The Sooners ran for another 310 yards and three scores.

OU travels to Los Angeles next week for a game against an 0-2 UCLA squad that lost to San Diego State this weekend. Yikes.

Much like their neighbors to the south, the Cowboys took care of their FCS foe Saturday.

After a slow start, the Oklahoma State offense finished the game with 580 total yards. After Spencer Sanders threw for 250 yards and three scores in a little over two quarters, Dru Brown got his first stint of extended work as a Cowboy. Brown completed 70 percent of his passes for 142 yards and two scores.

The Pokes travel to Tulsa next week.

Like a lot of Power Five programs, K-State hasn’t played the stiffest competition to this point, but the Wildcats have outscored their first two opponents 101-14.

K-State will get its first taste of competition next week when the Wildcats travel to 2-0 Mississippi State.

West Virginia didn’t look great in its Week 1, 20-13 win against James Madison, but Missouri lost to Wyoming. But, the Mountaineers royally stunk in Columbia.

Oklahoma transfer Austin Kendall threw for only 137 yards and a touchdown while also throwing two picks. The Mountaineers’ offense finished with just 171 yards, which probably isn’t going to cut it in the Big 12.

It doesn’t get much easier for the Country Roaders, as WVU travels to NC State next weekend.

Baylor ran all over the Roadrunners Saturday.

Often thought of as a passing program, the Bears ran for 368 yards to their 178 passing yards against UTSA. Five Baylor rushers scored touchdowns, and it was another dynamic day for BU’s backup quarterback Gerry Bohanon. Bohanon ran for a team-high 93 yards.

I saw a funny tweet that said Bohanon pulled a Robert Griffin and Bryce Petty all in this play:

Beautiful 😍 Gerry Bohanon is gonna be a nice QB pic.twitter.com/fIxitUPQiO

Although Baylor didn’t need to throw a ton, when the Bears did, they threw it to Denzel Mims. Mims had 101 of the possible 178 receiving yards and all three of Charlie Brewer’s touchdown passes.

The Bears have a week off before playing at Rice on Sept. 21.

Coastal Carolina lost to Eastern Michigan in Week 1, and after Kansas beat Indiana State, you thought maybe the Les Miles-led Jayhawks had a chance at being 2-0.

KU running back Khalil Herbert broke off a 41-yard touchdown run in the first possession of the game, but from there, KU went: punt, INT, punt, missed FG, INT, downs, downs, downs.

If those last three got you humming a Johnny Cash tune, that song has a lot more in common with KU football.

The Jayhawks hit the road for a game against Boston College on Friday night.

Alan Bowman’s arm might fall off soon, as he has already thrown 98 passes this season (for reference, Spencer Sanders has thrown 42).

It’s working out for the Red Raiders, though, as they are 2-0 after Bowman went 30-for-45 for 260 yards and three touchdowns against UTEP.

T.J. Vasher caught two touchdown passes. Running backs Armand Shyne and SaRodorick Thompson each had eight carries and 45 yards with the only difference being Shyne’s touchdown.

Tech travels to Arizona for its final game before conference play.