Interesting — Berry says the committee should be looking more favorably on the ACC and less so on the Big 12 and he gives a good reason for why. (NewsOK)

Here’s a great flowchart on how to dress for Bedlam. (CRFF)

Kevin Peterson on the difference between OSU and OU: “It’s more of a family program here.” (NewsOK)

Wow, Bielema has reportedly been talking to Nebraska?? @FauxBielema? (Yahoo)

Josh Fields talks about getting to see OU fans cry in 2001. (NewsOK)

So when you look at the simplicity of the wham play as an example, it is absurd to think as a coach that maybe the team just needs to grasp the scheme and that will lead to success. (CRFF)

Jeremy Seaton: “In my younger days, I wasn’t really sure who I was a fan of. I guess you could probably say that I was an OU fan whenever I was younger. But did I really know? I was basically just picking a side with whoever was around me.” (NewsOK)

I’ve covered more than 220 Gundy news conferences. I’ve never seen him like he was on Monday. (Tulsa World)

Mason Rudolph and Samaje Perine have injected a lot of intrigue into what once looked like a sleepy game, and the latter helps the Sooners keep OSU out of a bowl game. (Fox SW)

These are real videos that were made and it’s Bedlam week so I feel the need to remind you. (PFB)

Jim McElwain’s buyout is $7.5 million! Gundy’s is $3 million in case you were wondering. (CBS)

I feel like either John Hoover or John Klein drops a little bomb like this once every 10 days like they’re not a big deal. Klein insinuates here that Gundy should walk away like Urban Meyer! (Tulsa World)

Good third-down stat here and what it might mean for Bedlam. (ESPN)

UNT’s coach: “With Le’Bryan out, I told my staff, ‘Phil’s going to try and take over the game,’ And he did.” (NewsOK)

Wow — Le’Bryan isn’t on the top 50 watch list for the Naismith Trophy. (CBS)

Forte on his absurd shot: “I just saw it and knew – like the game clock was running down (to halftime). I was like, ‘I’m open, I might as well shoot it.’ ” (Tulsa World)

Hammonds came up to Ford right before tip-off and said he wasn’t going to play. (Tulsa World)

And my favorite screenshot. 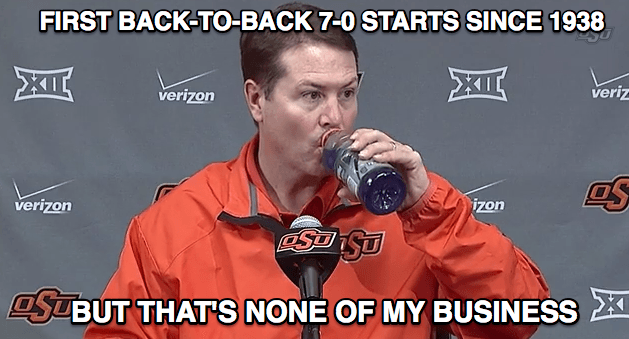 And here are the highlights from last night.

We never have anybody on this list either. No respect for Stillwater. (Big 12)

On Wyndham Clark’s sophomore year and what he’s trying to accomplish. “I don’t have any goals. I am just going to try to do the best I can every day. I try to learn and grow through each experience.” (okstate)

Seth Godin has a new book. (Your Turn)

How not to turn into an a-hole sports parent. (GQ)

The backlash against Serial and why it’s wrong. (Atlantic)