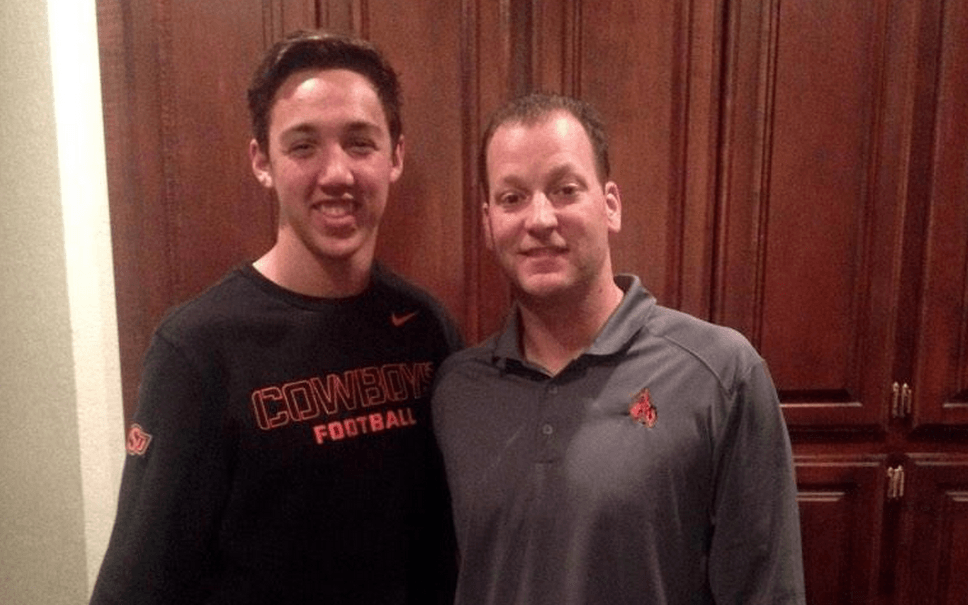 Ed. note: Kyle Boone is taking a look back at Oklahoma State’s 2015 recruiting class today. First up was defense. Now, the offense.

Carr committed just a week ago and Mike Gundy said he “could be the sleeper of this class.” Carr’s only Division I offer came from OSU a week ago. At 5-8, 173, Carr’s only knock is his size.

However his 40-yard dash time of 4.45 and 2,147 rushing yards as a senior make him an intriguing athlete and one that could be fun to watch as a return man or in the backfield.

Carr certainly needs to put on some weight to be able to compete in the Big 12 but Rob Glass and Co. should be able to put him in a great position at OSU.

Kolar played wide receiver until his junior season and moved to the quarterback position following an injury to All-American David Cornwell. Kolar threw for 2,292 yards to go along with 24 touchdowns and 5 rushing touchdowns his senior season.

Kolar committed early after OSU offered first last year and was loyal throughout the process. At 6-4, 190 pounds he should have a chance to put on some weight and strength during what is likely to be a redshirt freshman year.

Sekona is the lone Californian signee in the 2015 class who played as a two way lineman in high school. He was ranked as one of the top 50 defensive tackles in the nation, and OSU has recruited him to play as an offensive lineman where Scout ranks him as the No. 36 offensive guard nationally.

Sekona will need to improve his technique and strength but he appears poised to see playing time early in his career.

Wilson put on over 20 pounds throughout the course of his senior year and his coach, Greg McClendon, says Wilson has a “mean streak” on the field. McClendon also said this about his work ethic, “I’d say his No. 1 interest outside of football is weight room,” McClendon said, “and then I think after that he enjoys hunting and fishing.”

McCleskey could potentially gray shirt next season and count towards the 2016 scholarship list for next year. At 160 pounds McCleskey will need to bulk up but shows promise and speed, as he is clocked at a 4.37 40-yard dash time.

Comparisons between him and former receiver Josh Stewart have been plenty, and there is a good chance he becomes the same deep threat that Stewart once was.

Keyes was the definition of a late addition, as he picked up an offer Tuesday and signed his letter of intent on Wednesday. The de-commitment of Josh Jones left a vacant scholarship open, and Keyes fits the bill for an offensive lineman who will be able to develop and hone his skills in Stillwater.

I expect Keyes to redshirt and gain experience and probably contribute as a sophomore or junior.

Carson is a junior college transfer from Butler County C.C. who flipped his commitment from Georgia just this week and signed with OSU Wednesday. If anyone will play right away, it’s Chris Carson, a punishing back with an impressive resume.

He is a beast on the field with a 40 time of 4.35 and fits the part of an every down Big 12 back. Carson will certainly push to be the day 1 starter next season and his focus and mindset appears to set him apart from others. His highlight video is insane. Here’s another one:

The gravity of Salako’s transfer may not have set in just yet, but Salako is a 320-pound offensive tackle (!) who I believe will be a day 1 starter next season.

The UAB transfer started all 12 games as a sophomore and was able to practice during bowl season with the team. Salako will make the biggest impact next season and be able to contribute immediately.

Pertile was a highly regarded junior college lineman although he missed his entire sophomore campaign due to a knee injury. A late Florida visit tested Pertile’s loyalty, but he stuck with the Cowboys and told Tulsa World’s Mark Cooper that it that’s where my heart was!”

With Pertile being a junior college guy coming back from injury, I would expect him to be able to contribute at the tackle position next season and could be an excellent run blocker, something the Cowboys desperately need.

While the OSU fan base has gone borderline insane anxiously anticipating an elite running back, Todd Mays has been sitting back smiling just waiting for his opportunity.

Mays played quarterback and running back at East Mississippi C.C. and he could play some in the slot receiver or out of the backfield. I expect Mays to have a big year next season as he is explosive and hard to bring down as you can see in his highlight reel.

Kellerman and Chris Carson were teammates at Butler County C.C. and he will get a chance to plow some holes for Carson again as they team up in Stillwater next season. Kellerman will be able to mesh into the rotation next season probably at the tackle position and push for a starting spot as a junior college transfer.

Including junior college and graduate transfers as well as high school signees, the Cowboys officially add 22 members to the football program.

Is it football season yet?