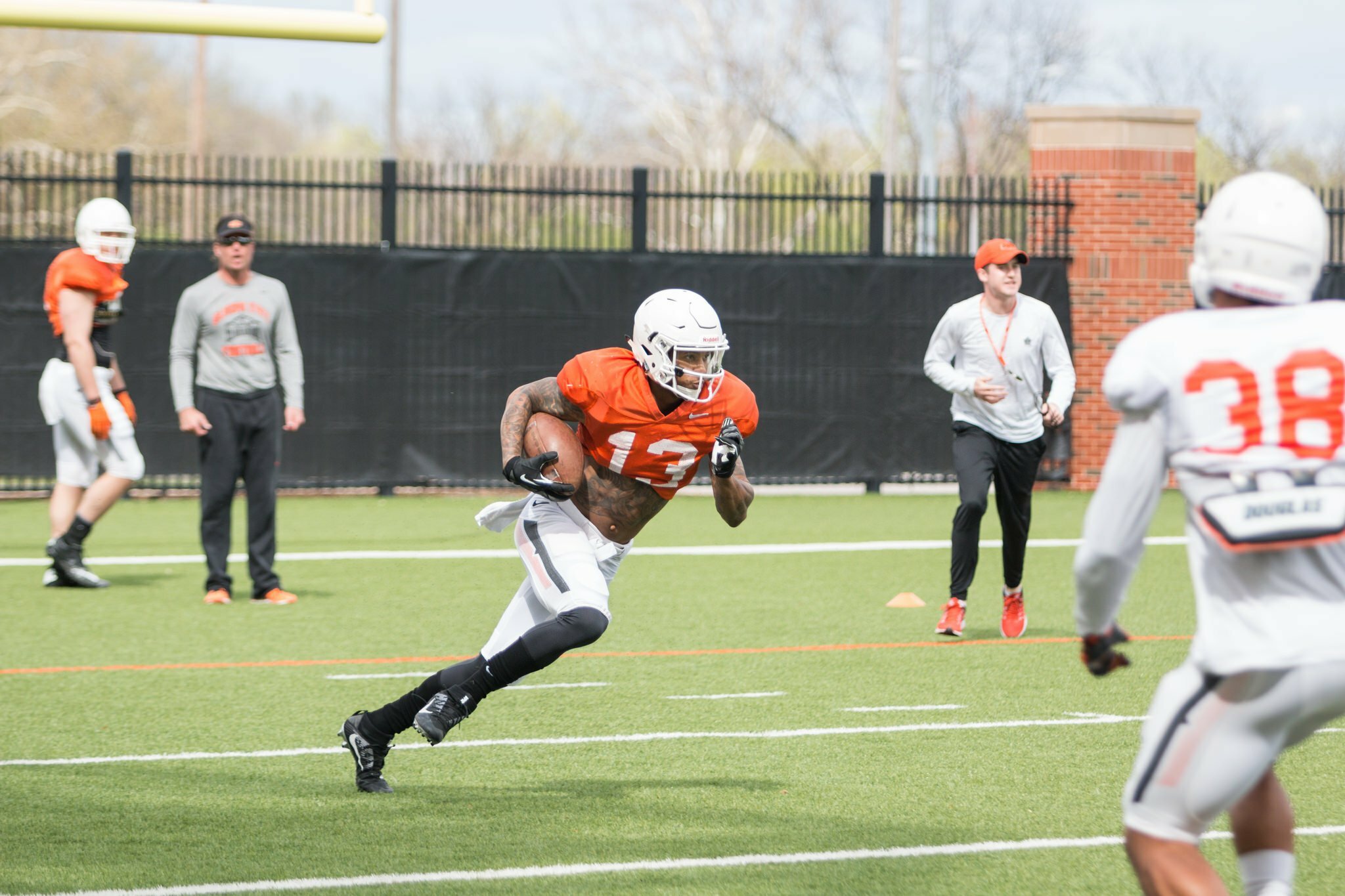 Fall camp is underway and there are still some things to shore up before Oklahoma State’s season opener against Tulsa. You’ve already heard what Kyle Porter and Hayden Barber want to learn. Now, it’s my turn.

1. What does the coaching staff know about the cornerback group that we don’t?

We’ve covered the changes around OSU’s secondary. Kenneth Edison-McGruder moved from safety to linebacker. Ramon Richards moved from corner to safety. With Clemson transfer, Adrian Baker — the only corner with a start to his name — only able to guard one side of the field at a time, the coaches must have a lot of confidence in their young cover men.

During Oklahoma State’s golf media day, Kyle Porter and Kyle Boone got a chance to pick Glenn Spencer’s brain about the shuffling around and he said something that really stuck out.

“Ramon’s all about what’s best for us,” Spencer said when asked about the move. “To get the best 11 on the field, that’s the best move.”

The best 11. So using that logic, the coaching staff thinks their upcoming cornerbacks are better-suited for reps than some of the safeties and even a linebacker that have (at least) more experience.

“What’s nice about it is that,” Spencer continued “you just get as many guys back there that can play some ball and you can win with. If something was to happen at corner, Ramon and Darius can always go back to corner.”

So have we all been looking at this the wrong way? Is corner a strength? I won’t go there but this dialogue gives a little more hope for the young cornerbacks OSU is going to roll out this fall.

2. Does Oklahoma State have an X-factor in the return game?

I’ve got to know. I bring it up so much that the guys in our slack chat are probably tired of hearing me talk about it. But the Cowboys haven’t had a legitimate game-changer in the return game in three years. I’m talking about someone whose name is written on the other team’s white board. The type where their punter has to duck a clipboard on the sidelines after he kicks to him.

Jalen McCleskey, for as great of a slot receiver as he is, just hasn’t wowed us. He had one punt returned for touchdown at Texas Tech in 2015. But that’s Tech. And he scared more OSU fans than others while attempting to field punts that year. Between that and a blocked punt-and-grab from Miketavius Jones that same year against Kansas, OSU has not returned either a punt of kickoff to the end zone since Tyreek Hill added years to Bob Stoops’ life on that cold night in Norman in 2014.

The good news is that there is no shortage of fast and skilled playmakers on the roster. Could Tyron Johnson factor in with his phone-booth elusiveness? Could it be Dillon Stoner, Tylan Wallace, LD Brown, Tyrell Alexander? One of the young corners? Sign me up to watch those tryouts.

3. Can the offensive line take a step forward? And is this sustainable growth?

We all expect the O-Line to be better next fall. Or, at least as good as 2016. But if the Cowboys want to continue competing for a conference title while Oklahoma retools at coach and Texas rebuilds, the offensive line needs to be a point of stability. Are they ever going to be Alabama? Doubtful. But the constant turnover in staff and miscues — or absolute misses — in personnel has kept Oklahoma State from taking a step forward as a football program. Imagine if Mason Rudolph had even this current OL in 2015.

Josh Henson seems like he could be the answer. But he’ll need to keep his commits and his unit will need to show improvement on the field. Most importantly, he’ll need to stick around. If the Cowboys want to avoid a huge drop-off following this season, they’ll need to be able to protect their brand new quarterback, whomever that may be, better than they have their record-setting senior up to this point.

We’ve been blaming this mess on Joe Wickline for about three years too long. It’s time for the offensive line to be continuously and consistently better moving forward.

4. Who plays at cowboy back?

The inaugural class of Mike Gundy and Jason McEndoo’s pet-project-turned-hybrid-position-group has now moved on. Blake Jarwin and Zac Veatch leave two big, and underrated, holes on offense. Mike Gundy has alluded to the possibility of OSU going five-wide more. (They better.) But the cowboy back is not going away.

The answers appear to be Keenan Brown in the Blake Jarwin/tight end role and Britton Abbott and incoming junior college fullback Sione Finefeuiaki in the Veatch/blocking fullback role. Finefeuiaki is intriguing coming from the College of San Mateo where he was featured in both the passing and running game. Maybe another goal-line weapon?

5. What difference does Lincoln Riley and an earlier Bedlam game make?

I could write an entire post on this — and we probably will. But I am intrigued, fascinated, leery and strangely optimistic about this year’s Bedlam game(s). Does the passing of the visor in Norman cause a step back for OU? I don’t know. We’ll find out soon enough. But I can’t justify Bob Stoops meaning so much to Oklahoma football on one hand and assume there’s no drop-off when he’s being replaced by someone with zero head coaching experience on the other.

What’s more important for our purposes is the effect it has on Mike Gundy. Whether it’s mental or subliminal — or psychological — the Cowboys’ winningest coach has had a Bedlam problem. And it’s not always been simply a difference in talent. Does the ghost of Bedlams past leave with Bob? Does an earlier spot on the schedule help? I have no idea, but this may be the most important question for OSU in 2017.