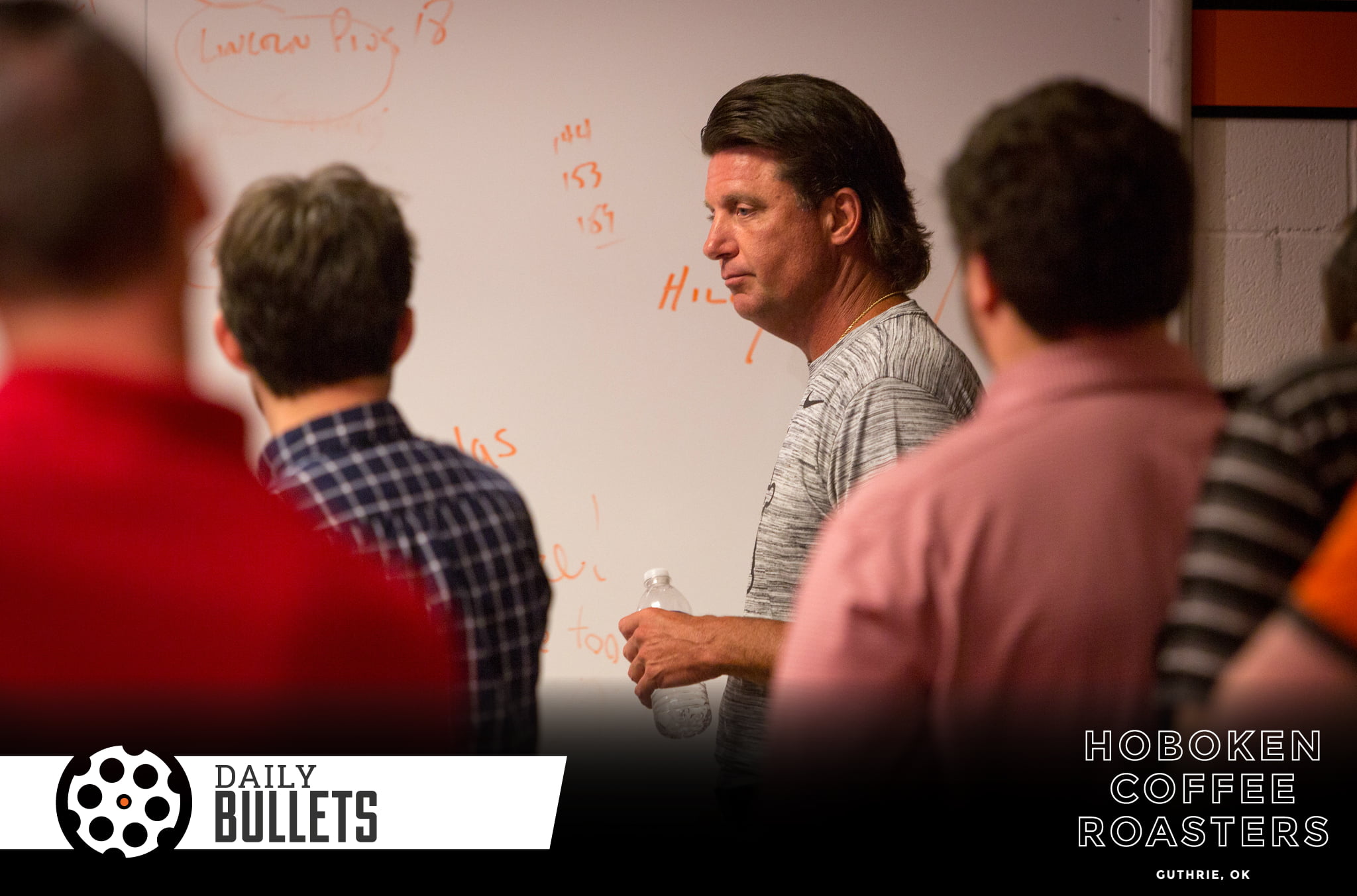 We’re mixing it up a little bit today as we test out a few new things for 2019. Instead of the full-fledged Bullets today, I’ve pulled the most viewed and engaged stuff from the past week and looked backward at them as we head into Christmas week.

We might keep this. We might not. Saturdays and Sundays are kind of weird for news, especially with games for the Pokes, so we’re going to at least try something different. I thought today would be a fun day to test it out. Feedback is always appreciated in the comments (as long as it’s kind).

• Most viewed (No. 1): James Washington finally has his big game — This technically wasn’t our most viewed, but it was our most viewed piece of actual news (I didn’t count the signing day live blog). I think one of the fun parts about becoming a better football school has been the continued interest into the NFL. Fun for us because there’s more interesting stuff to cover and fun for you because it’s cool to see NFL Pokes mixing it against NFL Sooners and NFL Buckeyes on Sundays.

• Most viewed (No. 2): Langston Anderson commits — This was certainly a big deal, but it also felt like it got a little buried because of the timing (late in the day), the fact that Mike Gundy had already had his press conference for the day and the annual consternation over crootin rankings. I guess the flip side is that Langston is the 54th-highest ranked recruit in OSU history … although he’s in good company, ahead of Jordan Brailford and behind Joe Randle.

• Most viewed (No. 3): Mike Gundy says biggest stars simply go to other schools — I’m still a little confused here about whether he was talking about quarterbacks only or all players generally. The question Gundy got was about QBs, but he seemed to transition within the answer to discuss all recruits, even though the answer itself seemed like it would only apply to QBs. Regardless, it was the most inflammatory thing he said on a rote Wednesday signing day.

• Most viewed (No. 4): Gundy is trying to nab three other players, who are they? — This question is essentially why sports blogs were created in the first place — rampant speculation and (informed) guesses about the future of athletics entities.

• It seems unfair that one team would be this deep at WR.

There’s been more buzz about Moore’s performance in practice than any other young player. The 6-foot-5, 175-pound true freshman got a late start, missing summer workouts, but has gotten up to speed since August. His long body and athletic gifts are rare, and he could work his way into some bowl game playing time. [NewsOK]

• Robert Allen thinks one of OSU’s problems is everybody not being on the same page. He wrote a sort of rebuttal to Bill Haisten’s column in the Tulsa World about Gundy being burned out.

Gundy signing day comments and all the recent history that may have fueled it makes for some frustrating times at Oklahoma State. It makes me wonder sometimes that if Gundy, Holder, the fans, everybody that matters were to get on the same page just what could be accomplished. Even with the dysfunction, Oklahoma State has won a lot of football games, and even in a down season they put down three ranked football teams, two in the top 10. It makes you wonder what could be done if …  [Go Pokes]

I mean … dysfunction? I get that things are often not as orange as everyone involved would like, but is OSU’s reality a different reality from Wisconsin’s or NC State’s or Auburn’s? I don’t know that I believe that it is.

• Brian Phillips the goat, and this on Zuckerburg, Facebook and how the internet is not at all what it started out to be is incredible.

From Zuckerberg’s perspective, the whole point of Facebook has always been to bring people together. Well, nothing brings people together like an empire. Talk about engagement with a platform! The question, for those of us who would prefer to remain barbarians (and who hold out hope of someday sacking Rome), is how does he imagine an empire expands its borders? Who is Facebook making war on, if not us? [Ringer]

• This on Google’s smart compose is ?

But email automation does something quite different. Rather than free people from drudgery so that they can focus on themselves, it directs users’ focus to the very fact of their banality, their robotic tendencies. It says: Ha ha, you email like a droid. I mastered your pathetic email-response style, and it only took me like a second, dweeb. That is, at least, the voice of my own existential angst. [Atlantic]