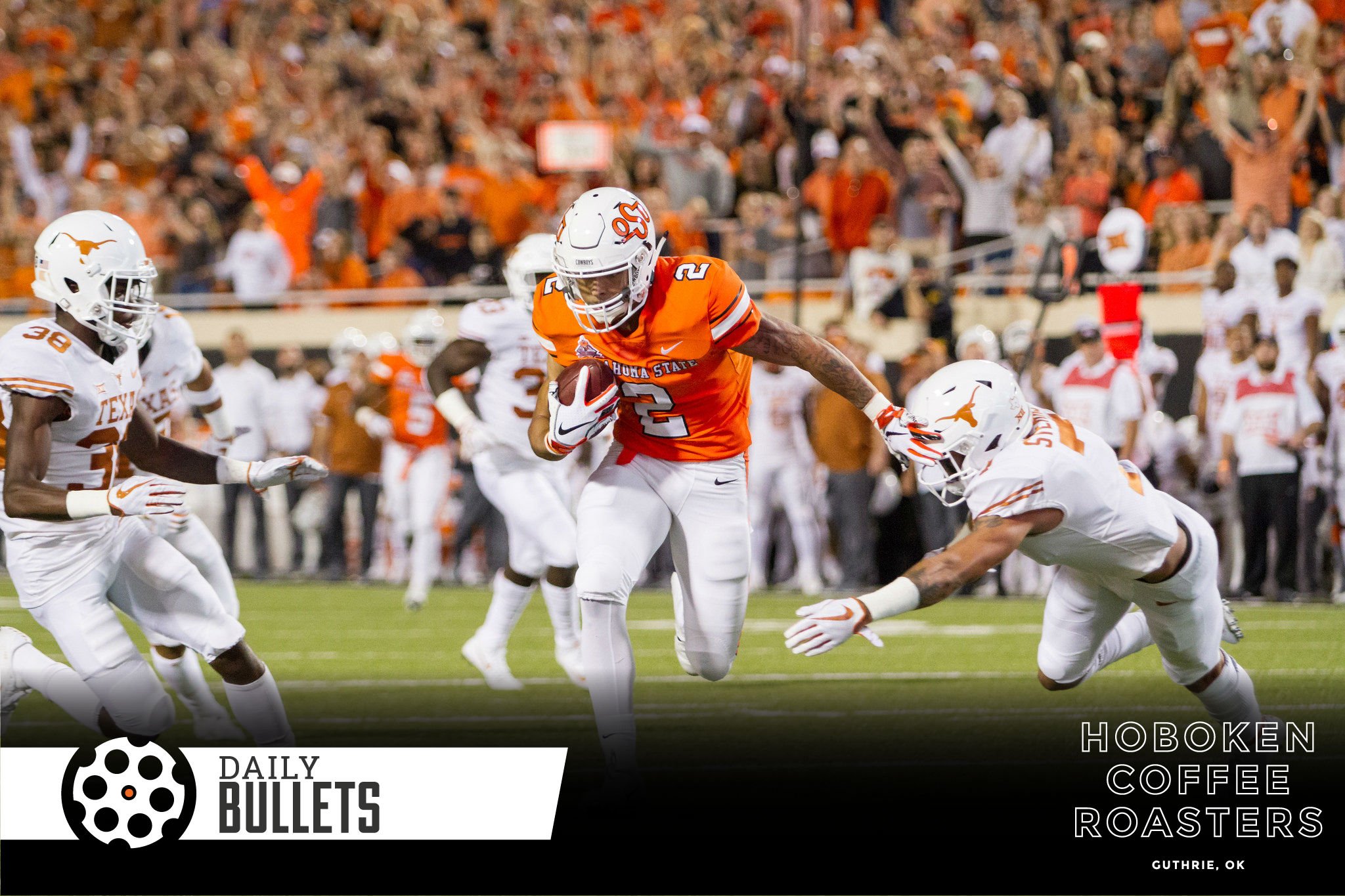 One of the bigger “what-if’s” for the 2018 season is what Justice Hill with more carries would have looked like.

The 2018 season was an uneven mess for the Cowboys. Inexplicably, Hill wasn’t used by Gundy and offensive coordinator Mike Yurcich as a dynamic playmaker typically is used.

It was expected that Hill would average 20 carries per game. In six games, he had no more than 15 carries.

It was expected that Hill would get a regular-season total of at least 1,400 yards. Instead, he didn’t even get 1,000. Because of injuries, he got only five attempts in Bedlam and did not play against West Virginia or at TCU.

As a junior, he finished with 930 yards.

It’s a nice total, but it’s not a Justice Hill total. [TulsaWorld]

Knowing the premise of the modern offense is to take what the defense is giving to you, any defense in the right mind would do their best to shut down the All-American first. Between that fact and replacing two starting tackles, it’s reasonable to assume Justice was taken out of games.

The counter is that No. 5 has shown time and again that he doesn’t need much more than a hint of daylight to cover lots of ground. Not only that, but it’s on the coaching staff to create opportunities for players to excel.

Tonight at 6 p.m. we’ll find out if Tylan Wallace wins the Biletnikoff. What we know is that his injured twin gives him a perspective and inspiration few college football players do.

Wallace’s twin brother, Tracin, will be alongside him when he learns whether he was able to beat out Alabama’s Jerry Jeudy and Massachusetts’ Andy Isabella for the honor. They’ve been side by side all year, even though Tracin, also an OSU receiver, has missed the majority of the season with his third ACL injury in the past four years.

“It’s been a real eye-opener,” Tylan said this week. “You never know when your last play is.”

…“I think he plays for his brother,” offensive coordinator Mike Yurcich said. “I think there’s a part of him … they’re kinda one. They’re tight at the hip. They’re really close. I think there’s definitely some fuel there.”

That fuel could lead to history. After James Washington won it a year ago, the Cowboys could be the first team to have different players win the Biletnikoff Award in consecutive seasons. Wallace would be the eighth underclassman to take home the Biletnikoff and make OSU the first program with four winners. [NewsOK]

Lamont Evans case update…..Gems on AJ Green, Tylan Wallace, and Jordan Brailford in Boyd’s All-Big 12 team….XFL is rebooting in 2020….Who should Kansas State hire to replace Snyder?….Wallace made second-team All-American with Sports Illustrated

The Tennessee OC rumor continue to swirl but head coach jobs like this seem to be the kind Yurcich will be considered for.

A better record is ideal but you give yourself a chance with a schedule like this.

After tonight, #OKState has played the No. 37 nonconference schedule in the country, per KenPom. Rather be 4-4 with the No. 37, or 10-3 with the No. 311 schedule? That's where OSU's noncon schedule ranked a year ago.